Please ensure Javascript is enabled for purposes of website accessibility
Log In Help Join The Motley Fool
Free Article Join Over 1 Million Premium Members And Get More In-Depth Stock Guidance and Research
By Rich Smith – Apr 30, 2018 at 11:57AM

Find out why one analyst likes the video game maker.

Video game specialist Take-Two Interactive (TTWO 0.39%) won a new upgrade on Wall Street this morning. Investors are responding as you'd expect, bidding up Take-Two stock by more than 2% in pre-market trading, and helping to reverse a recent trend of declining share price in the stock.

This decline, argue the analysts at Wedbush, is unwarranted because Take-Two Interactive is about to start earning a lot more than many investors expect. Is the analyst right or wrong? 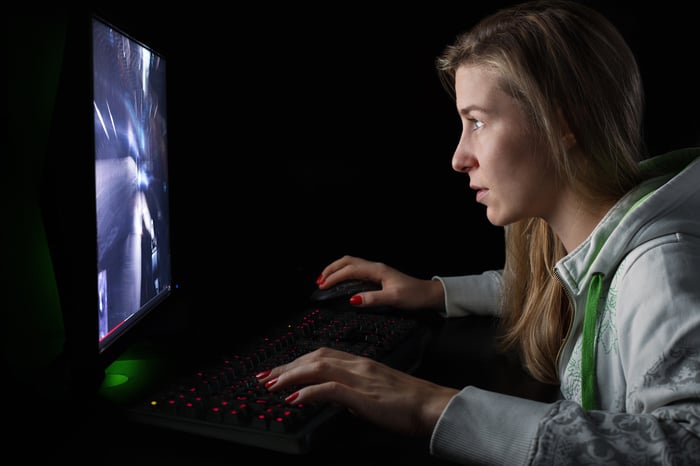 Wedbush takes Take-Two Interactive's closing share price on Friday -- $98.63 a share -- as its starting point. As Wedbush explains, Take-Two has at least two big game releases scheduled over the next couple of years:

Both are sequels to popular titles, and Wedbush is predicting good results. "We expect Take Two to deliver average EPS of $5.00 or more over the next two fiscal years," says Wedbush in a note covered today on StreetInsider.com (subscription required). Factoring Take-Two's $11 per share in cash ($1.3 billion total) into the valuation, Wedbush says the company's shares are selling for "roughly 17.5 times" its projected $5 a share in earnings.

For context, Wedbush notes that "[v]ideo game publishers have generally traded at 20x earnings or more in recent years," and for as much as 25 times forward earnings when there are "significant runways for continued top line and EPS expansion" (such as successful franchises like Red Dead and Borderlands provide).

With Take-Two shares selling for a big discount to both those valuations, Wedbush argues that the stock presents a "compelling value."

But does it really? Paying 17.5 times earnings for a stock that should perhaps sell for 20 or 25 times earnings certainly sounds like a bargain, but here's the thing: According to most analysts surveyed by S&P Global Market Intelligence, Take-Two will not earn $5 next year (or in 2020 either) -- at least not GAAP earnings. Rather, consensus targets for Take-Two's profits are just $1.84 per share this year, when calculated according to generally accepted accounting principles, then $3.72 per share in 2019, and just $3.04 per share in 2020.

And at $3 a share in 2020, this means that Take-Two Interactive's shares are arguably about 40% more expensive than what Wedbush makes them out to be at its projected $5 profit target.

Granted, Wedbush is probably not valuing Take-Two on GAAP earnings when it makes its projections, but rather using the more lenient and malleable pro forma profits standard that's more common on Wall Street. Even here, though, consensus targets call for Take-Two to earn a bit less than Wedbush is promising -- $4.89 in 2019 for example, and only $4.73 in 2020.

To avoid this GAAP vs. non-GAAP debate, I prefer to value my stocks on free cash flow -- the cash profits that they have actually already produced -- and proceed from there. In that regard, I've got both good news and bad news for Take-Two investors.

The good news is that over the last 12 months, Take-Two Interactive threw off more than $215 million in real cash profits from its business -- 18% more real cash profit than its income statement claimed it had earned. The bad news is that, at an ex-cash market capitalization (an enterprise value) of $10 billion, Take-Two stock still sells for about 46.5 times trailing free cash flow.

Relative to analysts' expected 18% annualized earnings growth rate, I fear that's too much to pay for Take-Two Interactive stock.

One final thought: Take-Two Interactive will be reporting its earnings after close of trading on Wednesday, May 16. Keep a close eye on those results, and in particular watch out for commentary on any effects Take-Two is experiencing from the popular Fortnite game released by Epic Games (backed by Tencent Holdings).

In a related note on Take-Two, covered on TheFly.com today, analysts at Stifel cut their price target for Take-Two stock by $4 (leaving a target that's still above Wedbush's though, at $131 a share). The reason: Stifel worries that "cannibalization" from Fortnite could eat into Take-Two's bottom line. If Take-Two confirms that worry, then the consensus expectation that Take-Two's earnings will grow at 18% could come into question -- and Take-Two stock could begin to look even more expensive than it already does.