Please ensure Javascript is enabled for purposes of website accessibility
Log In Help Join The Motley Fool
Free Article Join Over 1 Million Premium Members And Get More In-Depth Stock Guidance and Research
By Jeremy Bowman - Updated May 2, 2018 at 12:37PM

The online takeout marketplace reported another round of strong growth on the top and bottom lines.

GrubHub (GRUB) came into its first-quarter earnings report on a tear as the stock had more than doubled over the last year as investors are beginning to appreciate the opportunity in online restaurant ordering and delivery. Meanwhile, the company's partnership with Yum! Brands (YUM 2.82%) and Yelp (YELP 0.32%), including its acquisition of Eat24 from the review site, has given the company valuable new growth avenues and shows its appeal to partners.

At the time of writing, GrubHub stock was actually down close to 10% as investors seemed to be disappointed by weaker-than-expected growth in Daily Active Grubs (DAGs), or orders. However, the company's overall results were impressive, and management's explanation should put to rest any concerns about a slowdown in DAG growth. Below are the key numbers in the report. 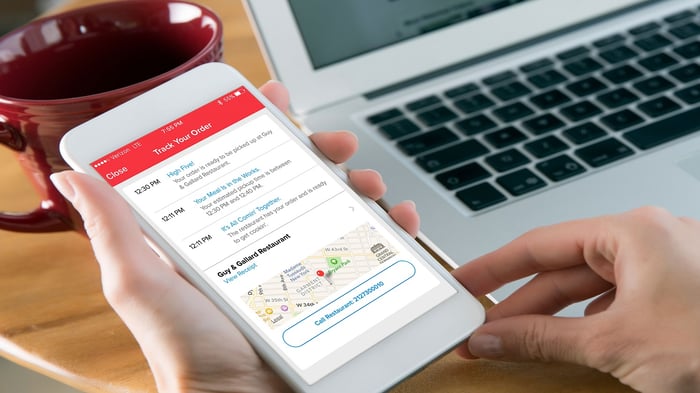 What happened with GrubHub this quarter

GrubHub continued to build on last year's acquisition of Eat24 from Yelp, which was the primary driver for the jump in categories like revenue and active diners. Eat24 is now fully integrated with GrubHub, ahead of schedule, and management said profits from Eat24 are about equal with the GrubHub platform.

GrubHub added several new restaurant partners in the quarter including Five Guys, Corner Bakery, and Ruby Tuesday, and it also set a record for new organic diners in the quarter, at 600,000, showing that growth didn't only come from acquisitions. The business tends to be seasonally stronger in the winter months so that's when the company generally adds new customers.

Though Daily Active Grubs grew more slowly than the other categories, management noted that organic growth in DAGs accelerated for the second quarter in a row, and overall DAG growth was pressured in part because management stopped using coupons with former Eat24 customers. While that cost the company some orders, it led to growth in revenue and profits. DAG's would have been up 18% to 19% without the Eat24 acquisition.

In April, the company integrated Venmo onto its platform, giving users the option to pay with popular Paypal-owned app.

GrubHub management continued to tout the opportunities ahead as well as the company's effective execution in the past quarter.

"Our team executed well in the first quarter, making meaningful progress toward our most significant goals for 2018," said CEO Matt Maloney. "We've already launched dozens of new delivery markets, completed our Yelp and Eat24 integrations a quarter earlier than expected, and attracted a record quarterly number of organic new diners."

Looking at growth, Maloney said the company was "committed to make investments to support long-term profitable growth." Those include acquisitions, partnerships with restaurants, and improved technology and marketing, as the company understands that competitive advantages like network effects and switching costs will get bigger as the company grows and maintains its leadership, especially if it gains market share.

Underscoring the company's valuable position as a partner for restaurants, Maloney said:

Restaurants are not a significant growth story with the exception of online ordering. Every board room is asking the management team, 'What are we doing about online ordering?' And they're foolish if they're not evaluating Grubhub given our scale, given the validation from the Yum deal, and all of our expansion efforts.

GrubHub's guidance for the current quarter and the rest of the year was solid as it sees revenue of $228 million to $236 million for the second quarter, up from $158.8 million, representing 46.1% growth at the midpoint. For the full year, it sees revenue of $930 million to $965 million, or an increase at 38.7% at the midpoint as growth will slow toward the end of the year as the company laps its acquisition of Eat24.

GrubHub has only begun working with franchisees from KFC and Taco Bell to integrate its platforms and the company is still seeing growth in its biggest markets like Chicago and New York, while it expands in smaller markets. Though revenue growth is expected to ease over the year, the long-term growth story remains intact.