Please ensure Javascript is enabled for purposes of website accessibility
Log In Help Join The Motley Fool
Free Article Join Over 1 Million Premium Members And Get More In-Depth Stock Guidance and Research
By Travis Hoium - May 1, 2018 at 9:31PM

Investors are picking apart the casino resort operator's first-quarter report, but there's still a lot to like about this company.

Investors haven't reacted kindly to MGM Resorts' (MGM 3.63%) first-quarter report. As I'm writing, shares are down more than 10% since earnings came out Thursday, and analysts are seeing flaws in the operation from Massachusetts to Macau.

Before you give in to the temptation to shun this gaming giant, let's take a look at what is going well and what went wrong for MGM Resorts in Q1. 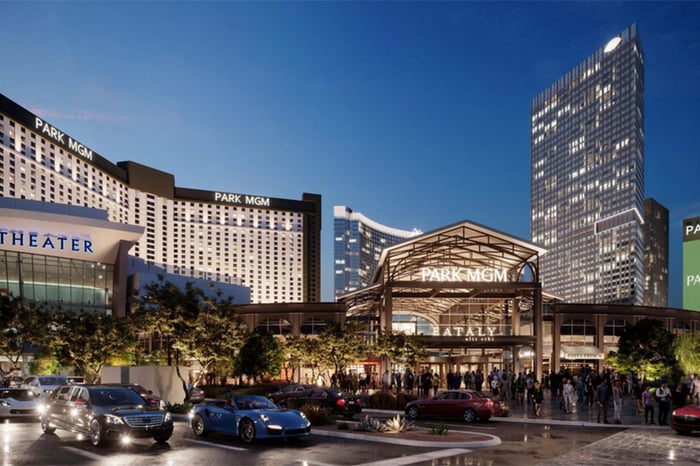 We know from public data the Las Vegas Strip isn't exactly booming today, but investors were hoping MGM Resorts had been spared some of the weakness there. To frame the operating environment, Las Vegas Strip gaming revenue was down just 0.7% year over year in the period that spanned December through February (the latest for which data was available) and visitation was down 2%, so growth of any kind was going to be tough to come by.

Weak room rates in Las Vegas and weak gambling in regional casinos led to the 4.8% decline in adjusted property EBITDA for domestic resorts, and that's the key metric investors should be watching in 2018. Since we use EBITDA as a proxy for the cash flow coming from resorts, its decline is not good news.

Cotai is a bright spot

Macau was the best performing region for MGM Resorts, which is no surprise given the 19.1% gaming growth in the Chinese territory during the first quarter. But MGM Resorts didn't see broad-based growth like some competitors.

Overall, MGM's Macau revenue was up 25% to $596 million, and adjusted property EBITDA increased 5% to $152 million. But MGM Cotai, the company's newest resort, opened in February and began contributing to results. If we split out MGM Macau, its original casino on the peninsula, revenue was only up about 7.5% to $510.9 million and property EBITDA was flat at $145.8 million.

MGM Cotai generated $85.0 million in revenue and $5.9 million in property EBITDA. The numbers are small right now, but new resorts typically take a year or two to ramp up to full operating capacity. For example, the 20-month-old Wynn Palace (across the street from MGM Cotai) has reported revenue and EBITDA growth each quarter it has been open, and had 47% revenue and 89% EBITDA growth in Q1, so it's still in ramp up mode nearly two years after opening. Based on that, MGM Cotai probably won't reach its full potential until 2019 or 2020.

One thing management did during the conference call was reaffirm its commitment to MGM Springfield in Massachusetts, which is due to open in August. There was some discussion about rumors that MGM might buy Wynn Boston Harbor if a sale is deemed necessary by regulators, but CEO James Murren said this of making such a large acquisition:

I just don't see it. I don't think it's likely. It would have to be an extremely unique situation.

There's definitely some wiggle room in that statement because the conditions under which Wynn Resorts would put that property up for sale would indeed be "unique," but for now, management doesn't want investors thinking such a purchase is in the works.

MGM isn't in as bad a shape as it seems

The way share prices sank after the report would make sense if MGM Resorts had a terrible quarter or gave very weak guidance. There's some softness in Las Vegas and around the U.S., and project delays could push revenue per available room and EBITDA lower than expected in 2018, but I don't see any long-term alarm bells for investors here. This is still one of the best gaming companies in the world, and I think that once it finishes up this expansion phase, which included building MGM National Harbor, MGM Springfield, and MGM Cotai, its cash flow machine will shift into a higher gear.