Storage is sexy these days. After all, we are living in a big-data-powered world, and all that data being generated by Internet of Things (IoT) sensors, digital transactions, and cloud computing needs to reside somewhere. Thus, the big data explosion is breathing life into the storage industry.

Let's take a look at two of the big industry players: Western Digital and Seagate Technology, two of the three big manufacturers of hard disk drives (Toshiba being the third). Hard disk drives (HDDs) are the most prevalent form of nonvolatile memory, which stores data even when power is turned off. Hard disk drives are slowly being replaced in some applications by solid state drives (SSDs), which are built on NAND flash technology. SSDs are faster, more stable, and consume less power. Still, HDDs remain much cheaper than SSDs and are still being used in hyperscale data centers.

So, which company is the better buy today? 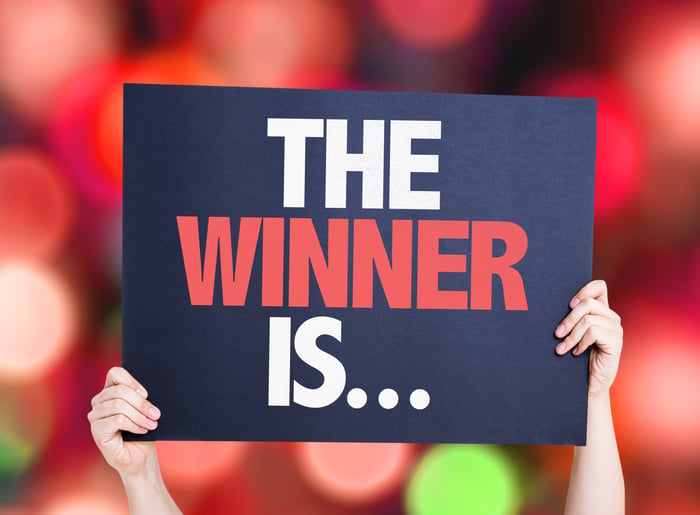 While both Western Digital and Seagate are major hard disk drive manufacturers, each has pursued different strategies for diversifying into flash and other new technologies.

Western Digital decided to go "all-in" on flash, purchasing NAND flash player SanDisk back in 2016 for $19 billion. Post-acquisition, Western Digital is now one out of five flash memory producers, and the No. 2 player in solid state drives.

Seagate, on the other hand, has stuck mostly with the core HDD business, focusing on cutting costs while returning cash flow to shareholders. The company does have a small business in SSDs, but gets its flash memory from outside vendors. The company recently inked a long-term deal for flash supply with Toshiba, but Toshiba is potentially going to sell its memory business. Fortunately, Seagate is part of a consortium looking to purchase the unit, which should help the company access flash at reasonable prices. In addition, Seagate management recently revealed it had invested in Ripple (XRP-USD), a blockchain technology network, a few years ago, but the company didn't disclose how much it had invested.

While Western Digital paid a pretty penny for SanDisk, high NAND flash prices this year have made that look like a savvy purchase. I like the increased diversification into flash production as well, so I'm going with Western Digital.

Last year's earnings and cash flows were skewed for both companies due to tax reform and nonrecurring integration changes, so it's probably a good idea to look at forward estimates when assessing valuation for each. 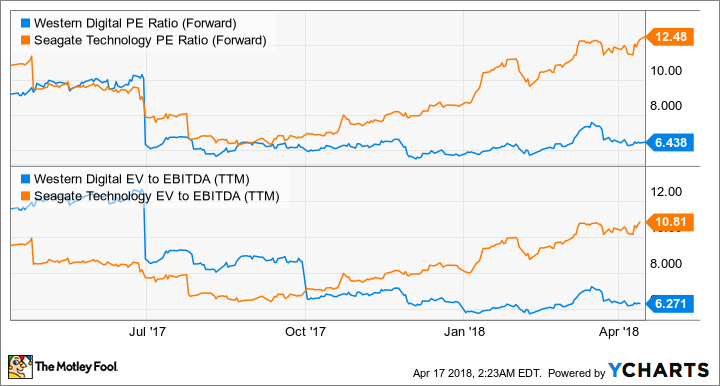 As you can see, Western Digital trades at an extremely low forward P/E ratio and EV-to-EBITDA ratio. In the coming year, the company will start to see the full cost savings of the SanDisk integration, a lower U.S. income tax rate, and lower interest payments due to the continued paydown of debt. All of these point to increased earnings in the year ahead.

Western Digital appears to be the less expensive of the two companies, which seems strange. Analysts predict Western Digital's sales will grow 7.5% in the current fiscal year, while Seagate is projected to grow only 0.9%.

Clearly, the market is skeptical that NAND flash will maintain the solid pricing experienced in the past year, but that seems to be fully priced in here. Western Digital looks like the better value.

Finally, both stocks are dividend-paying stocks. When assessing dividends, I like to look not only at the dividend yield, but also how well the dividend is covered by earnings (using the payout ratio), as well as how much the dividend has grown:

Clearly, Seagate wins on the current yield, but Western Digital's payout is covered about seven times over, meaning it's much safer, and has the potential to grow faster. Of course, Seagate's dividend also looks secure, with a payout ratio just north of 50%. As you can see, Western Digital did not increase its dividend this year, instead choosing to pay down debt from 2016's SanDisk acquisition.

Winner: Seagate (but it's close)

To me, Western Digital is the winner: More diversification and a lower valuation are enough to make up for its lower dividend, at least for me. Unless you are exceedingly bullish on the future value of the Ripple blockchain network, I'd look west for your storage needs.