Please ensure Javascript is enabled for purposes of website accessibility
Log In Help Join The Motley Fool
Free Article Join Over 1 Million Premium Members And Get More In-Depth Stock Guidance and Research
By Jason Hall - May 2, 2018 at 5:20PM

While there wasn't any material news related to the natural gas refueling company, reports that deliveries of a highly anticipated new natural gas engine have begun could be driving its stock price higher.

Shares of natural gas for transportation leader Clean Energy Fuels Corp (CLNE 5.35%) jumped nearly 10.5% on May 2. As of 2 p.m. EDT, the stock was up about 6% before surging in late trading to finish the day up by double digits.

Clean Energy Fuels didn't make any announcements on the day, and there wasn't any material news out about the company directly. However, two pieces of information that are related to its business probably played some role in the jump.

On May 1, heavy-duty enginemaker Cummins (CMI 0.49%) announced its first-quarter earnings and included a mention of its ISX12N engine, co-built in a joint venture with Westport Fuel Systems (WPRT -4.42%). The engine recently become the first class 8 on-highway truck engine to attain near-zero emissions certification by the California Air Resources Board (CARB). This natural gas-powered engine exceeds federal EPA emission standards by about 90% and is poised to take market share as stricter emissions standards are implemented. 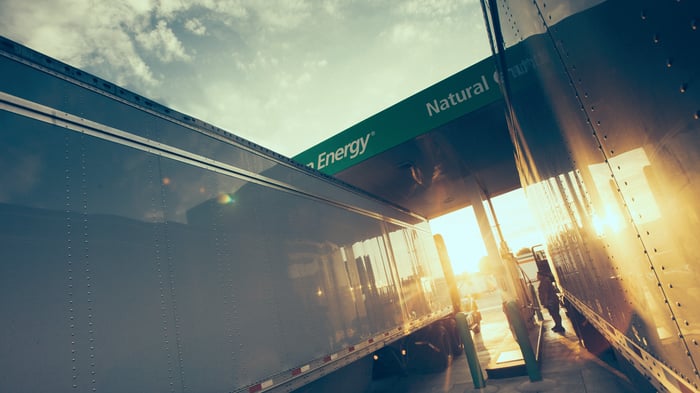 On May 2, at the ACT EXPO in Long Beach, Calif., AJR Trucking, PACCAR subsidiary Kenworth, and the California Natural Gas Vehicle Partnership announced that AJR had taken delivery of the first class 8 truck using this new engine. AJR will take possession of another 19 trucks with the ISX12N engine in coming weeks.

As to Clean Energy Fuels, few companies are as well-positioned to benefit from the debut of this engine. As the biggest station operator and supplier of natural gas for transportation in the U.S., the company should benefit from higher oil prices and more focus on reducing emissions likely to drive many truck operators to consider this new engine. Its prospects get even better when you consider its dominant position in California, where a substantial number of trucks featuring this engine would operate.

California is home to some of the worst air quality in the country, particularly in cities located where some of the country's biggest ports are: Los Angeles and Long Beach. The new CARB regulations, as well as other regulatory agencies in Southern California, are likely to increase ownership of this new engine in trucks that operate in Southern California's polluted cities. That's great news for Clean Energy Fuels.

Put it all together, and today's big jump is sort-of a "whisper" move, where investors are attempting to get ahead of the potential growth that broad adoption of this engine could mean for Clean Energy Fuels. But at the same time, we don't have any sales results for this engine, and it will likely take multiple quarters before we have any idea how much this new engine helps drive more fuel sales for Clean Energy Fuels.