Please ensure Javascript is enabled for purposes of website accessibility
Log In Help Join The Motley Fool
Free Article Join Over 1 Million Premium Members And Get More In-Depth Stock Guidance and Research
By Rich Smith – May 2, 2018 at 4:54PM

Pitney Bowes reported earning $0.28 per share on a GAAP (generally accepted accounting principles) basis in Q1, and $0.30 adjusted for one-time items, roughly in line with the $0.29 that Wall Street analysts had predicted it would earn. Sales for the quarter came in at $983 million, ahead of consensus estimates of $930.4 million in sales.

But if Pitney Bowes met or exceeded expectations for Q1, then why is its stock down, not up? 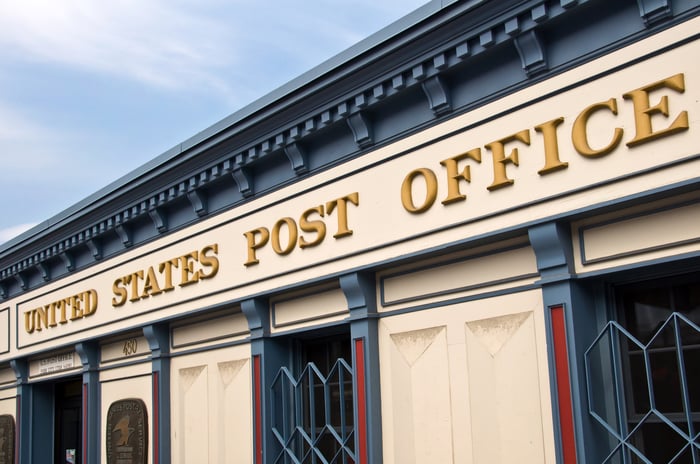 Unlike the United States Postal Service, Pitney Bowes isn't losing money -- but neither is it making much. Image source: Getty Images.

Well, "earnings beat" or no, Q1 wasn't a great quarter for Pitney Bowes. The company grew sales strongly, it's true -- up 18% year over year. However, profits on those sales fell steeply. The $0.28 per share that Pitney earned in Q1 2018 was 20% less than it earned in the year-ago quarter -- despite greater sales.

That all adds up to deeply lower profit margin earned on its revenue last quarter -- and maybe in quarters to come as well.

Turning its eyes to the future, Pitney Bowes guided investors to expect sales to rise 11% to 15% in 2018. That should work out to sales of between $4.1 billion and about $4.26 billion -- well ahead of the $3.9 billion that analysts had been saying the company was likely to produce this year. Unfortunately, Pitney said its "adjusted profits" will only range between $1.15 and $1.30 per share, versus analyst hopes for $1.45.

That right there, I expect, is the main reason investors sold off the stock today: Pitney Bowes warned on profits, and investors took that warning to heart.