Please ensure Javascript is enabled for purposes of website accessibility
Log In Help Join The Motley Fool
Free Article Join Over 1 Million Premium Members And Get More In-Depth Stock Guidance and Research
By Jeremy Bowman - May 3, 2018 at 8:30PM

Here are a few companies in the booming online retail sector that are not named Amazon that you might want to add to your portfolio.

E-commerce has been one of the biggest growth engines in business for the past 20 years. Shopping from the comfort of one's home -- or anywhere -- has become increasingly popular as delivery has gotten faster, interfaces have improved, and the near ubiquity of smartphones has made mobile shopping even easier.

In the U.S, e-commerce sales have been steadily increasing by about 15% annually since the Great Recession, and it appears likely they'll continue to grow at that pace, as even the most hidebound traditional retailers have finally recognized the need to invest in their online sales infrastructure. Outside the U.S., similar trends are afoot.

Though Amazon (AMZN 2.57%) has attracted much of investors' attention in the space -- and deservedly so, as it's now one of the most valuable companies in the world -- there are several other appealing e-commerce stocks that are flying a bit further under the radar. Below are a few top picks for those looking for lesser-known investments in the online shopping space. 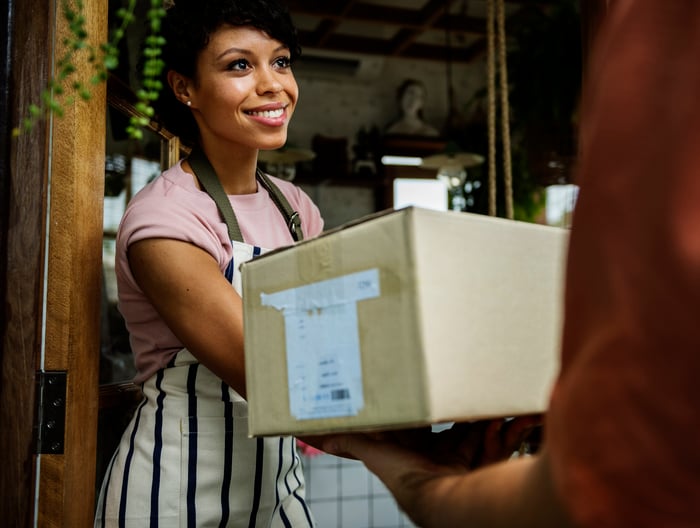 Though it's often called the Chinese Shopify, that comparison doesn't do justice to Baozun (BZUN 4.23%), which does even more for its customers than its North American peer. While Shopify primarily sells subscriptions for its cloud-based e-commerce platform service to small and medium-sized businesses that want an  online presence, Baozun offers that and more, taking care of everything e-commerce related for its brand partners, from IT to marketing to fulfillment and customer service. Among the clients it has attracted are multinationals like Philips, Nike, and Microsoft.

Baozun is only valued at $2.5 billion, and is chasing a huge growth opportunity in China, where the middle class is rapidly expanding -- and so is online shopping. China's e-commerce market is now the world's biggest,  and it's forecast to nearly double to close to $1 trillion by 2022. And Baozun isn't just riding that growth wave, it's also gaining market share. The company now has 25% of the e-commerce services market, nearly triple the share of its closest competitor.

Unlike many e-commerce companies, Baozun is profitable, and profits are growing quickly as the company pivots from a direct-sales model to a higher-margin services model. In the most recent quarter, revenue increased 23% to $240.6 million, but profits more than doubled. The stock's value has nearly tripled in the past 12 months, but given the company's relatively small market cap, and the growth opportunities ahead, it should have plenty of room to run.

Somebody's got to deliver all of those products that we're ordering online, and increasingly, that somebody is XPO Logistics (XPO 4.01%). The freight and logistics company has become the leader in last-mile delivery of heavy goods like furniture and appliances, making it a key partner of retailers like Amazon, IKEA, Wayfair, and Home Depot.

XPO has grown largely through acquisitions, and its revenue has increased more than tenfold since 2014; the transportation specialist now generates more than $15 billion in annual sales. After a break from M&A deals to allow it to absorb its new business units and build synergies, CEO Brad Jacobs said in August that his company was likely to target more acquisitions -- he's reserving $8 billion to buy new companies. XPO also plans to double the number of hubs in its last-mile delivery network.

Those efforts to improve efficiencies are paying off on the bottom line: Adjusted EPS nearly doubled in the most recent quarter, and analysts expect it to rise 74% to $3.45 this year.

In December, the stock spiked on a rumor that Home Depot was going to make a bid for XPO, in part to keep it out of the hands of Amazon. While such a buyout doesn't seem likely at this point, the believability of the rumor underscores the unique value of XPO, and the potential for it to be acquired should keep the stock price elevated.

Like the other stocks on this list, Etsy (ETSY 1.97%) has been on a tear lately: The stock is up 40% so far this year. In fact, share prices have nearly tripled over the past 12 months as the company, under new CEO Josh Silverman, seems to finally be unleashing the power of its unique platform and marketplace model. Silverman, who was ushered in by activist investors last May, has laid off employees, shut down underperforming or tangential business units, and focused on driving gross merchandise sales, or the total sales of its merchants.

In the key fourth quarter, the craft-centric marketplace saw gross merchandise sales growth accelerate to 17.8%, which led to strong growth in revenue and gross profit that pushed its bottom-line result from a loss of $0.19 per share a year prior to a profit of $0.36 per share.

For most companies, direct selling in e-commerce hasn't been very profitable, in part due to aggressive competition from Amazon, with its low prices and fast delivery. However, the marketplace model has generated significant margins for companies like eBay and Amazon, which also has thousands of third-party sellers on its platform. Etsy, which operates like an online flea market, doesn't need to worry about things like shipping costs and price matching, and should be able to leverage its platform as it grows. It has demonstrated it can withstand pressure from Amazon (which launched its own Handmade division to better compete with the smaller company). I expect Etsy's profits should begin to ramp up, propelled by its unique brand, product selection and marketplace model.

All three of these stocks have performed well lately, but considering the opportunity in e-commerce, there should be plenty of further gains in their future.