Please ensure Javascript is enabled for purposes of website accessibility
Log In Help Join The Motley Fool
Free Article Join Over 1 Million Premium Members And Get More In-Depth Stock Guidance and Research
By Lee Samaha – May 3, 2018 at 2:45PM

The details behind the network security company's first-quarter earnings report.

Network security company Check Point Software Technologies Ltd.'s (CHKP -0.86%) recent first-quarter earnings report was slightly disappointing, but it's what management said about future execution challenges and opportunities that really counts. The company, and the IT security market in general, is going through a period of change. Here's the lowdown.

As you can see above, it was a satisfactory result for the quarter, but management was moved to cut its full-year 2018 guidance.

The reduction in full-year revenue and earnings guidance is due to the changes Check Point is making in its sales operation, according to comments from CEO Gil Shwed on the earnings call with analysts. Let's take a closer look at what he's talking about.

The issue of sales execution, notably in the U.S., first surfaced in the third quarter of 2017 with Shwed then outlining how restructuring the Americas region sales operation caused him to be cautious about near-term execution and give disappointing guidance.

Fast-forward to the fourth quarter (revenue only came in at the midpoint of guidance) and Check Point reported its second quarter in a row of declining sales in the Americas. It wasn't much better in the first quarter -- Americas region sales barely rose in the quarter, and Shwed outlined how changing the sales execution was taking longer than he'd hoped.

The impact on Check Point's sales growth in the last few quarters can be seen in the chart below. 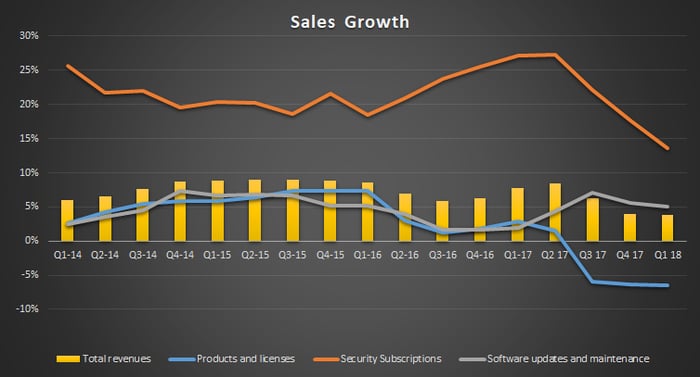 Fifth-generation threats require a holistic approach to security architecture, and the kind of unified security platform that usually requires higher level executives to purchase. According to Shwed on the earnings call, "CISOs [chief information security officers], CIOs [chief information officers], and others have the ability to see the bigger picture and update their overall security architecture to fifth-generation protection."

As anyone who's ever worked in sales will tell you, it's a lot harder and more time-consuming to get hold of a higher-level executive and convince them of the merits of a significant strategic investment than it is to sell a simple solution to a middle manager. "We're asking them to learn new sales techniques, reach much higher in the organization and learn new tactics in approaching new customers and opportunities," Shwed said.

The company needs to transition its U.S. sales force toward selling its new generation of security products. Shwed argues that it's mainly an issue of its sales people starting to approach people "higher in the organization." Investors will be looking to monitor progress on this front in the coming quarters.