Fitness wearables company Fitbit (NYSE:FIT) reported its first-quarter results after the market closed on May 2. Device unit sales plunged as demand for the company's fitness trackers weakened, leading both the top and bottom lines lower. Smartwatch sales are growing fast, with the inexpensive Versa leading the way, but it wasn't enough to avoid a double-digit revenue decline. Here's what investors need to know about Fitbit's first-quarter results.

Fitbit provided the following guidance for the second quarter and the full year: 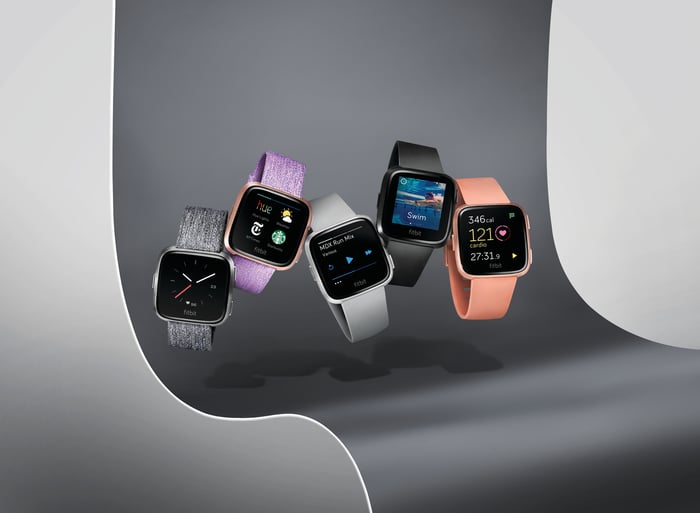 While overall demand for Fitbit's bread-and-butter fitness trackers is weak, CEO James Park identified one source of solid demand during the earnings call: "And despite the decline in tracker growth, we still see demand for trackers in the market across price-conscious users in the healthcare system, so we will continue to adapt how we approach this segment category in order to maximize our share of the overall wearable device market."

Park also explained how developing the Versa was a lot easier than developing the Ionic: "Fitbit Versa is a great example of this working on the smartwatch side of the portfolio as many other foundational assets from Fitbit Ionic like the Fitbit OS and SDK were already in place. And that result was a product launch that required approximately 45% less development hours than Fitbit Ionic."

Park emphasized that the company's strategy is focused on the long term: "This evolution is less about providing near-term revenue in '18 and more about setting ourselves up to grow durable sources of revenue in '19 and beyond. We are focused on driving efficiency in the device side of our portfolio and redeploying the contribution margin into our growth vectors, specifically international, Fitbit Health Solutions and software service."

While smartwatches are expected to make up the majority of revenue later this year, they're not as profitable as the company's fitness trackers. Fitbit expects its gross margin to suffer from its smartwatch expansion, which will put further pressure on the bottom line. Even if Fitbit manages to return to revenue growth in 2019, profits may not follow suit.

Fitbit has two things going for it. First, the Versa smartwatch appears to be doing well so far. That's important, because the more expensive Ionic smartwatch failed to meet the company's expectations. Second, Fitbit still has a fortress balance sheet with enough cash to muddle through years of bad results. The company can afford to adopt a strategy focused on the long term at the expense of today's results.

But given the stock's performance lately, investors don't appear all that confident in Fitbit's turnaround plans.