Biotech has consistently been home to some of the top growth stocks in the entire market. And even though biotech hasn't been at its best by a long shot this year, this particular sub-sector has still managed to produce some of the best-performing stocks at large.

Over the past year, for example, gene therapy company uniQure N.V. (NASDAQ:QURE) and endocrine specialist Viking Therapeutics (NASDAQ:VKTX) both saw their shares skyrocket against the backdrop of a fairly weak overall market for biotech. Despite their rapid appreciation, though, these two stocks might still be incredible bargains for investors comfortable with high levels of risk. Here's why. 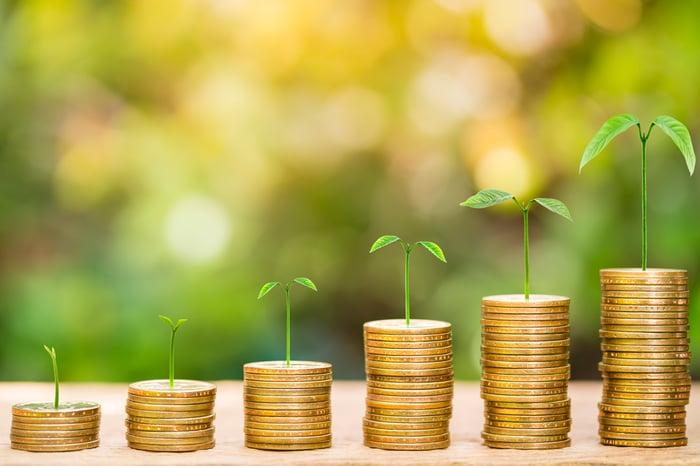 Gene therapy has reinvented itself

After decades of disappointing results, gene therapy has truly come of age in the past two years. And the market has definitely taken notice. Gene therapy stocks, after all, have been jumping higher this year, and this trend is showing no signs of slowing down. That's one key reason the small-cap biotech uniQure N.V. might be a particularly great buy right now.

uniQure has three core gene therapy programs in development: AMT-061 for hemophilia B, AMT-130 for Huntington's disease, and a partnership with Bristol-Myers Squibb (NYSE:BMY) to bring cutting-edge gene therapies to market for a host of cardiovascular diseases. Among these clinical programs, AMT-061 is the company's most advanced, with a pivotal-stage trial slated to start by the third quarter of this year.

In the broader view, the biotech's value proposition truly centers around its next-generation gene delivery system, adeno-associated virus 5, or AAV5 for short, which is believed to encounter less resistance from the immune system in neural and liver tissue. In the past, the most commonly used vector, AAV2, has had trouble delivering enough of the therapeutic gene because of immune detection in these tissues, leading to weak efficacy results.

uniQure's system, by contrast, is somewhat novel to the human immune system, which should translate to stronger efficacy results. And if the company is right, uniQure could be an absolute steal at current prices, as it would sport the gold standard in gene delivery systems for brain and liver-based disorders.

On the financial front, uniQure just completed a huge $128 million secondary offering, which should be enough to get AMT-061's pivotal trial rolling. This recent influx in cash, along with its licensing deal with Bristol-Myers, should satisfy the company's financial needs until AMT-061 either bears fruit or crashes and burns in late-stage testing.

Hip fractures are a fairly common event in the lives of elderly adults, and testosterone is generally prescribed afterwards to promote healing and increase bone mineral density. The problem, though, is that testosterone is a general growth hormone that also hits receptors in tissues such as the prostate gland. So, the big idea behind VK5211 is to exclusively target receptors in bone tissue to lead to a faster recovery following a fracture, without the dangerous side effects posed by exogenous testosterone therapy.

Last November, Viking released its first evidence that VK5211 can do just that. In a mid-stage proof-of-concept study assessing the drug in patients recovering from non-elective hip fracture surgery, the biotech reported that VK5211 hit its primary endpoint, along with certain secondary endpoints. Viking is expected to report follow-up data from this study, and unveil its plans for the drug's future development, later this year. As VK5211 could fill a major unmet medical need, this small-cap biotech looks dirt cheap at current levels.

The downside to this story is that Viking isn't well-capitalized. In fact, it's hard to see how the company can fund another large study for VK5211 and develop its other clinical candidates without a massive secondary offering. And that feat is hard to pull off when your share price is presently hovering around a paltry $4.14.

Are these two biotechs screaming buys?

uniQure and Viking certainly offer stellar upside potentials. The likelihood that Bristol-Myers flat-out buys uniQure seems to be increasing by the day as the company works toward validating its gene-delivery platform, and even if a buyout doesn't occur, the company should be able to generate some truly awe-inspiring sales figures if its lead product candidate works out. Viking, on the other hand, appears to have a drug development platform worthy of catching the attention of a large partner soon, which would go a long way toward solving its financial problems.

That being said, these two clinical-stage biotechs are far from a sure thing. One misstep in the clinic, after all, could send their shares spiraling downwards. Put simply, you probably shouldn't buy more than you can afford to lose with either of these speculative biotechs.