Please ensure Javascript is enabled for purposes of website accessibility
Log In Help Join The Motley Fool
Free Article Join Over 1 Million Premium Members And Get More In-Depth Stock Guidance and Research
By Beth McKenna – May 4, 2018 at 10:00AM

In the first quarter of 2018, the data center operator and global interconnection specialist's revenue and adjusted funds from operations (AFFO) per share jumped 28% and 26%, respectively, driven by organic growth and acquisitions.

Shares closed down 6.1% on Thursday, which we can probably attribute to the company revising slightly downward its full-year 2018 adjusted funds from operations (AFFO) outlook, as we'll get to in a moment. (AFFO is a closely watched metric for companies organized as real estate investment trusts, or REITs. It's akin to "earnings" for REITs.)

Here's how the quarter worked out for the data center operator and global interconnection specialist and its investors.

Equinix slightly exceeded the upper end of its guidance for revenue, which was between $1.204 billion and $1.212 billion; the company doesn't provide quarterly AFFO guidance. Wall Street was looking for AFFO per share of $4.94 on revenue of $1.21 billion, so Equinix sailed by the AFFO expectation and slightly surpassed the revenue consensus. 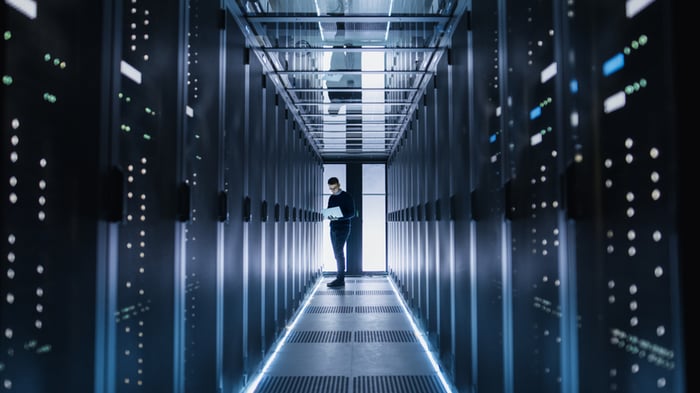 Here's what Peter Van Camp, executive chairman and interim CEO, had to say:

As Equinix approaches its 20th anniversary, we are excited to post our 61st quarter of consecutive revenue growth, which is reflective of the critical role we serve in helping businesses interconnect their IT infrastructure to succeed in the digital economy. Equinix currently serves nearly half of the Fortune 500 and our recent acquisitions, combined with our currently announced organic expansions, have positioned Equinix to capture an even greater share of the market opportunity.

Van Camp was Equinix's CEO from 2000 to 2007. Equinix is seeking a new leader, as former CEO Steve Smith resigned from his position, along with his seat on the board of directors, in late January after "exercising poor judgment with respect to an employee matter," according to Equinix.

Equinix turned in a solid quarter. The company provided second-quarter guidance, revised upward its 2018 revenue outlook, and pared back its 2018 AFFO guidance, which it issued last quarter.

For the second quarter, it expects revenue in the range of $1.257 billion to $1.267 billion, an increase of 4% quarter-over-quarter, or a normalized and constant currency growth rate of approximately 2%. Equinix does not issue quarterly AFFO guidance.

Equinix's revised AFFO guidance includes an incremental $40 million from the Infomart and Metronode acquisitions and a $10 million boost from foreign currency when compared to its initial outlook. It also includes $50 million of additional debt service costs related to the recent acquisitions, and an expected $50 million in integration costs.