Shares of Chili's parent Brinker International (NYSE:EAT) were moving higher last month in tandem with some other casual dining chains, and as investors anticipated its first-quarter earnings report out on May 1. According to data from S&P Global Market Intelligence, the stock finished the month up 21%.

As the chart below shows, the stock rose steadily over the course of the month, got a boost toward the end from an analyst upgrade, and rose in tandem with BJ's Restaurants, which turned in a strong first-quarter earnings report. 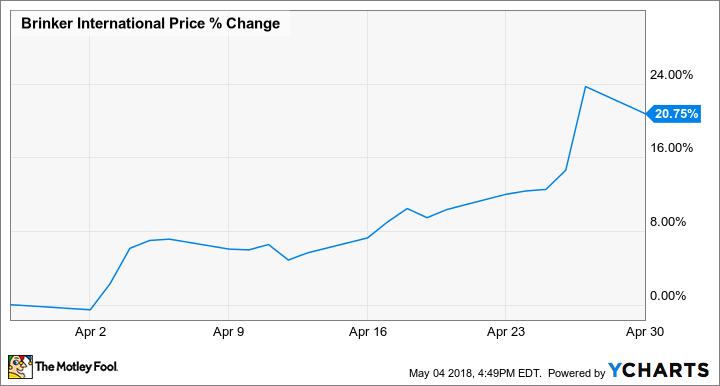 It was mostly a quiet month for Brinker, which also owns Maggiano's Little Italy, but the stock had its best day on April 27 when it gained 5.5% on an analyst upgrade from RBC Capital Markets. Analyst David Palmer lifted his rating on the stock to outperform and raised his price target to $49 from $40. Palmer said he believed that Chili's finished the first quarter on an upbeat note, thanks to its new 3-for-$10 platform, improved advertising, and a new loyalty program. 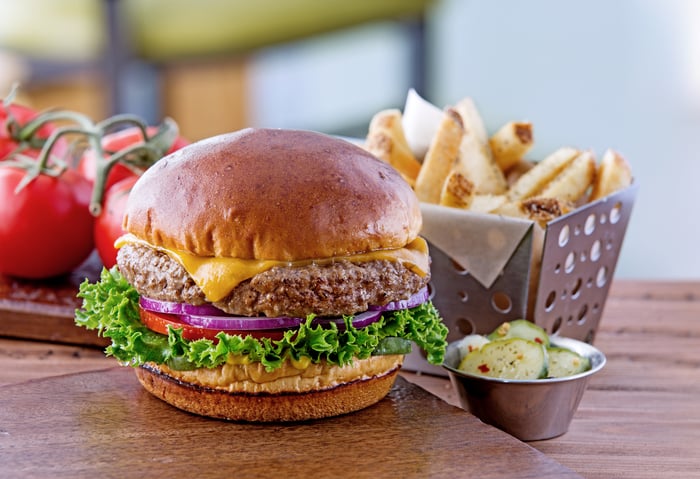 Also that day, BJ's Restaurants jumped 13% on its own first-quarter earnings report, posting comparable sales growth of 4.2% and a 59.5% jump in adjusted earnings per share with the help of the new tax law. Brinker shares gained 3.8% on April 4, the same day Dave & Buster's turned in a middling earnings report, perhaps a sign that casual dining chains were taking back market share from the "eatertainment" champ.

Brinker shares gained mostly on the company's first-quarter earnings report, up 2.9%, that came out on May 1. The company beat expectations on both top and bottom lines as revenue increased 0.2% to $812.5 million, beating estimates at $807 million. On the bottom line, adjusted earnings per share rose from $0.94 to $1.08, topping expectations at $1.03.

Its same-store sales performance was disappointing, however, as comps fell 0.4% at company-owned Chili's and dropped 3.2% at franchised domestic locations. For the full year, it sees revenue of flat to down 0.5% and expects comparable sales down 0.5% to 1%. Brinker also expects operating margins to decline by 65 to 75 basis points.

Considering that outlook, perhaps it's not surprising that the stock gave up the initial post-earnings gains.