Please ensure Javascript is enabled for purposes of website accessibility
Log In Help Join The Motley Fool
Free Article Join Over 1 Million Premium Members And Get More In-Depth Stock Guidance and Research
By Tyler Crowe – May 6, 2018 at 11:15AM

The railroad saw some traffic related issues in the first quarter, but higher prices and strong demand led to a record-setting quarter.

It's not to hard to see why Wall Street was quick to reward Norfolk Southern's (NSC -2.28%) most recent earnings result with an 8% uptick in stock price. The company's results were well above expectations thanks to much better than expected results from its intermodal business and improving operating metrics. If these results are any indication of what we can expect for the rest of the year, then this may not be the last time we see significant stock gains for this railroad company.

Let's take a look at what is driving the company's strong earnings performance this past quarter and whether the underlying trends for these results can stay this way for some time. 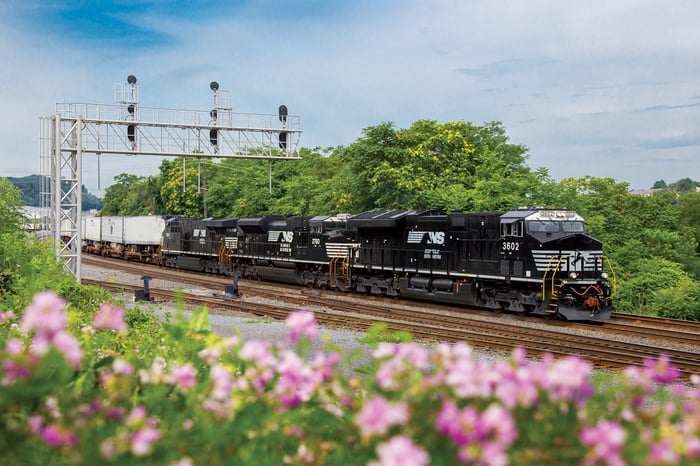 Norfolk Southern's first-quarter result can be largely attributed to two things: An incredible influx of intermodal rail traffic and the lower corporate tax rate. Railroad companies have historically been an industry without big tax loopholes or deductions to lower their tax burden and therefore tended to pay close to the corporate tax rate of 35%. With lower tax rates, though, it looks like Norfolk Southern will benefit immensely. Even though pre tax income was 8% higher this past quarter than this time last year, its tax bill was 23% lower. It was certainly one of the driving forces behind the 30% increase in earnings per share.

From an operations standpoint, Norfolk Southern is riding quite the wave of intermodal traffic on its rail network. The market to move freight and intermodal containers via truck is extremely constrained right now and prices to move goods have gone through the roof. According to The Wall Street Journal, spot prices for trucking services are up 30% as a lack of drivers and high demand has customers looking to move goods via rail when possible. As a result, revenue from intermodal traffic was up 18.7% from the prior year. Revenue growth like that is almost unheard of. 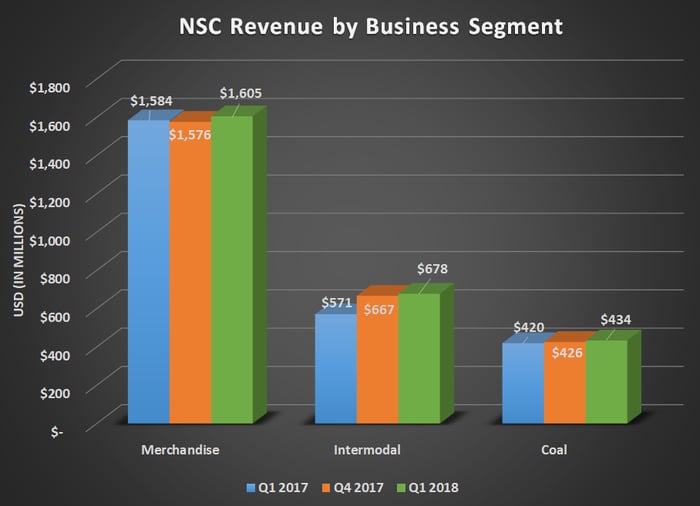 One thing that is surprising in these numbers is that despite the high growth rates for intermodal traffic and some serious congestion issues on its network in the quarter, it was still able to post a company record operating ratio of 69.3%. Higher revenue rates were a big contributing factor there, but management was able to offset a significant uptick in fuel costs with lower compensation and benefit costs.

For five straight quarters, management has been able to reduce its total rail employee count, but that trend will come to an end in the coming quarters as management intends to add 1,500 rail employees to handle increased capacity on its rail network.

On the company's conference call, CEO James Squires addressed some of the congestion issues and how they impacted the bottom line.

Our first quarter operating ratio was 69.3%. All of these figures are first quarter records. While we are pleased with the continued progress in our financial performance, we are also confident that we can produce even better bottom-line results as network velocity picks up. In the quarter, reduced velocity meant we were unable to provide the service our customers expect and incurred additional expenses totaling $43 million.

He also gave a high-level review of the company's plans for 2018 to turn in even better results in the coming quarters.

As service recovers, our focus will be maintaining network stability and resilience, even as we continue to push productivity. We're optimistic about the opportunities in front of us. And with the current outlook for the economy, we are well-positioned to deliver another year of solid top and bottom-line growth. Our nine consecutive quarters of year-over-year operating ratio improvement underscore our unrelenting focus on shareholder value. 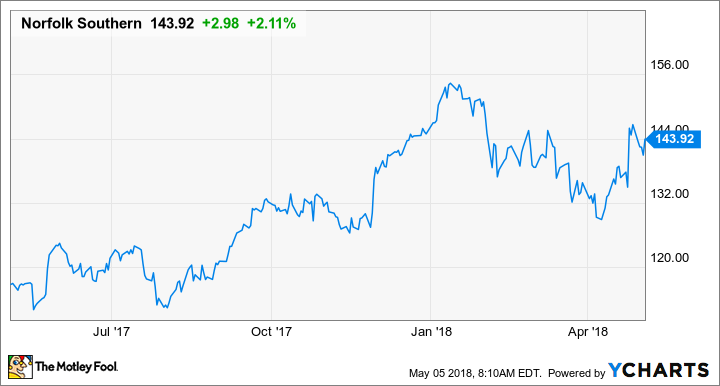 Norfolk Southern's high rates of intermodal traffic are an indication that the U.S. economy is humming along nicely and that the trucking industry is a little behind the eight ball because finding drivers is getting harder and harder by the day with such low unemployment rates. Barring any significant event to reverse these economic trends, Norfolk Southern should continue to see fantastic intermodal traffic that could mask any weaknesses in businesses like coal.

Intermodal may be a cyclical thing, but lower tax rates could be something here to stay. If that is the case, then it frees up loads of cash that Norfolk Southern can use in a myriad of ways. Some of it will likely go into expanding capacity, but management also has an ambitious plan to buy back $1.5 billion in stock this year alone. Those share repurchases plus the previous decision to increase the dividend by 18%, suggest that there is some room for this stock to run for a while