Earnings season continued to provide a lift to the market.

Stocks rebounded on Wednesday, with the Dow Jones Industrial Average climbing back from triple-digit losses early in the session to finish with a modest gain. Market participants were initially nervous because of the continued upward pressure on interest rates and their potential negative impact on the U.S. economy. But later in the day, confidence returned, and the steadfast market reversed course. Several individual stocks had much larger advances. Norfolk Southern (NSC -2.28%), Six Flags Entertainment (SIX -2.37%), and Intrepid Potash (IPI 0.20%) were among the best performers on the day. Here's why they did so well.

Shares of Norfolk Southern rose 8% after the railroad reported its first-quarter financial results. Norfolk Southern said that operating revenue climbed 6% on a 3% lift in shipment volumes, with particular strength in its intermodal business, which offset weakness in coal and merchandise shipments. Net income jumped by more than 25% due largely to lower income tax rates, and the railroad also cited strong internal performance in improving its operating ratio to record levels below 70%, a key figure for the industry. By building up momentum, Norfolk Southern is doing a good job of working its way out of what had been a tough period for railroads more broadly. 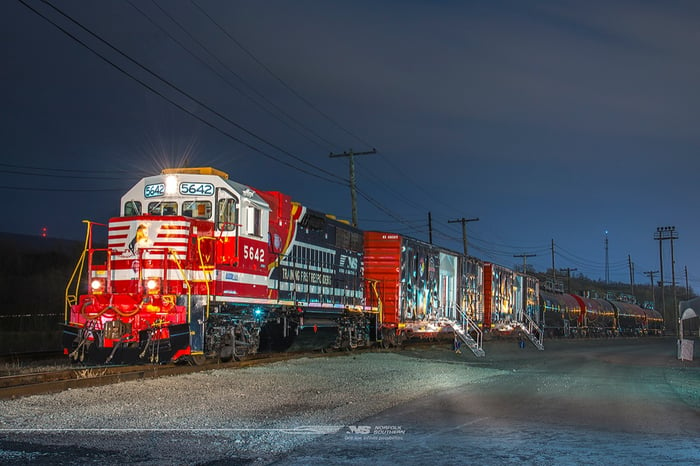 Six Flags Entertainment stock climbed 8.5% in the wake of the company's release of first-quarter financials. Revenue soared in response to initiatives to open up new days of operation at key theme parks that are more typically closed during the winter months. That move helped to narrow losses from what investors had expected to see, and sales of season passes and other membership-based programs reached record highs. If Six Flags can keep up the pace as the weather warms up, then further growth is almost a given, and investors hope that the theme park operator can reach some of its stretch goals to achieve even bigger successes sooner than originally anticipated.

Intrepid gets a sales boost

Finally, shares of Intrepid Potash soared 19.5%. The producer of potash for fertilizer managed to turn itself around during the first quarter of 2018, reporting a modest profit after seeing substantial losses in the previous year's period. Potash sales were roughly flat, but margin levels widened due to Intrepid's greater utilization of byproducts in the potash production process. Intrepid investors had expected the company to see a dramatic revenue decline, making the 9% jump on the top line a pleasant surprise. If agriculture industry conditions keep improving, it should equate to more progress for Intrepid's business.