Please ensure Javascript is enabled for purposes of website accessibility
Log In Help Join The Motley Fool
Free Article Join Over 1 Million Premium Members And Get More In-Depth Stock Guidance and Research
By Harsh Chauhan - May 7, 2018 at 11:46AM

With AMD's prime catalyst on the wane, the chipmaker will find it difficult to sustain its growth.

Advanced Micro Devices (AMD -0.57%) has been thriving by undercutting rivals Intel (INTC -1.90%) and NVIDIA (NVDA -0.06%) on pricing. The company's strategy of offering consumers cutting-edge chips at lower prices has worked wonders, as it has managed to corner a big share of the graphics card market for itself, while cutting its teeth in the Intel-dominated central processing unit (CPU) space at the same time.

Consider this: AMD's graphics processing unit (GPU) market share shot up to 33.7% during the final quarter of 2017 as compared to 21.1% in 2015, according to Jon Peddie Research. The company engineered this rise by first moving into the low- and mid-tier GPU markets with its Polaris cards in 2016, and then moving into the premium segment with Vega last year.

AMD followed a similar strategy in the CPU market, where Intel was holding an absolute majority. It launched chips at half the prices that Chipzilla was charging, and resorted to price cuts during the recent holiday period to move more chips. Not surprisingly, CEO Lisa Su claimed that AMD's CPU sales tripled late last year, boosting its market share to 12% from 9.1% in the space of just over a year.

Wall Street has appreciated AMD's efforts as the launch of its new products has coincided with a rise in its key financial metrics.

But AMD's strategy of low-balling its opponents isn't sustainable. The improvements in its revenue and margins have been driven by bigger factors at play, and it might not be long before its strategy stops working. Here's why. 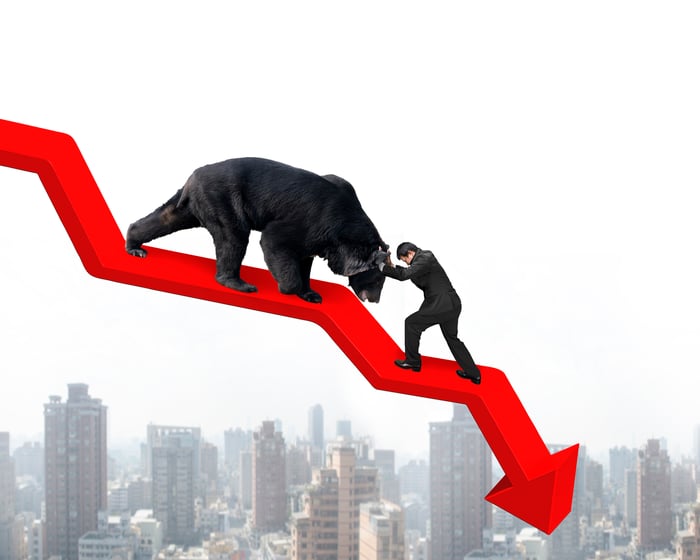 The chart below shows that AMD's margins hit an inflection point sometime in late 2016, but the actual recovery started last year. This coincided with what's being called the worst GPU shortage in history, as cryptocurrency mining-led demand priced gamers and PC enthusiasts out of the market. Miners were willing to pay a massive premium for GPUs to mint money from the crypto boom, so the prices of mid- and high-end GPUs doubled. 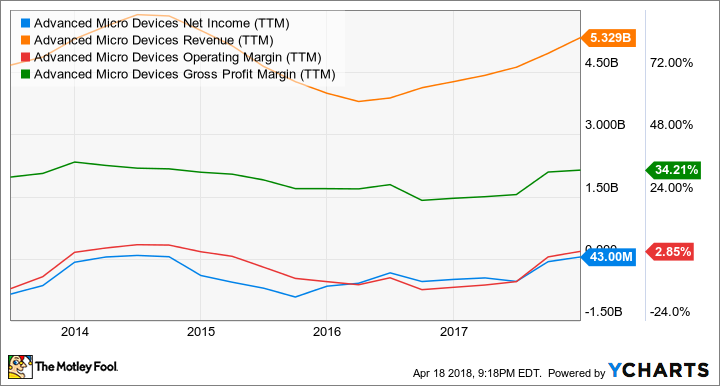 AMD was in the right place at the right time to take advantage of this GPU shortage as it had just launched its Vega GPUs. In fact, AMD was reportedly the prime  benefiter of crypto-related sales, with $776 million worth of GPU revenue last year.

A Vega RX 64 GPU that was priced at $499 initially was going for more than $750 on the market at the end of March this year, while the RX Vega 56 was selling for almost $800 last month as compared to its launch price of $400. This spike in GPU prices positively impacted AMD's revenue and margins.

The company gained 3 percentage points' worth of gross margin last year as the revenue mix improved, allowing it to post $179 million in net income as compared to a net loss of $117 million a year ago. But the bad news for AMD is that the GPU price rise won't last forever, and once prices hit parity, NVIDIA could get back into the game.

AMD's Vega graphics cards weren't up to the mark when they came out, delivering only marginal gains over NVIDIA's 2-year-old offerings without much of a price difference. Moreover, the Vega GPUs have been known to be power hungry, so users running them incur additional costs in the form of electricity bills.

So, when GPU prices start normalizing, and they already have, Vega might not find many takers. For instance, the price of the RX Vega 56 has dropped from as much as $2,000 in January to $650 lately. By comparison, the relatively more powerful NVIDIA GTX 1080 was at $1,200 in January and has now dropped to $700, which is very close to the price of AMD's offering.

So, AMD will fall harder as supplies increase to bring back gamers who were earlier priced out of this market. Another factor that will hurt AMD is the launch of a specialist cryptocurrency mining chip. Chinese company Bitmain is reportedly developing a dedicated cryptocurrency mining chip that's supposedly more efficient than GPUs in terms of power consumption and performance. Such a development has the potential to knock the wind out of AMD's sails.

Meanwhile, AMD's second-generation Ryzen processors have been priced way below their predecessors last year. The flagship Ryzen 2700X has been priced at $329 this year, far less than last year's $500 price tag for the Ryzen 1800X. What's surprising is that this year's chip is slightly more powerful than last year's offering. This possibly means that AMD is looking to grab more market share from Intel, but its decision could backfire and weigh on its margins as the safety net of strong GPU prices slips away.

Now, we have already seen that AMD has been barely profitable over the past year, so it runs the risk of falling back into the red because of the lack of pricing power and superior products from rivals. Additionally, the likes of Intel and NVIDIA have way stronger margins than AMD, so they can easily lower the prices of their chips to protect market share. 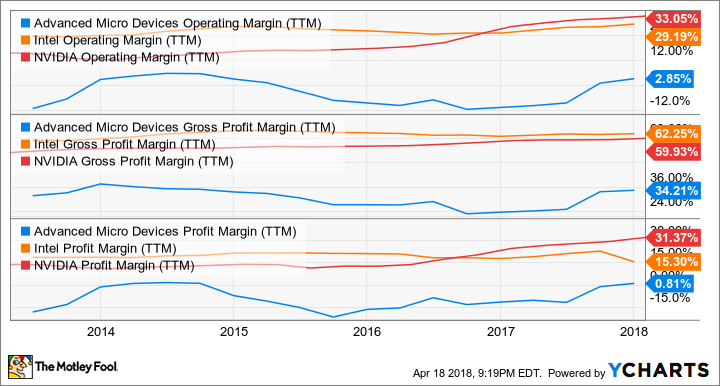 AMD is an extremely expensive stock with a price-to-earnings (P/E) ratio of almost 250. In comparison, both NVIDIA and Intel are way cheaper, with trailing P/E multiples of 48 and 26, respectively. Getting into AMD at this valuation isn't a good idea given the potential margin challenges that it might face.

Moreover, analysts don't expect any growth whatsoever in AMD's earnings over the next five years. So, there's a possibility that AMD's golden run could be over, as the prime catalyst that has powered its growth is waning.