Please ensure Javascript is enabled for purposes of website accessibility
Log In Help Join The Motley Fool
Free Article Join Over 1 Million Premium Members And Get More In-Depth Stock Guidance and Research
By Daniel Miller - Updated May 7, 2018 at 4:32PM

The future of driverless electric vehicles, and the services they could provide, is lucrative. Getting to that future, though, will be a long process made up of small steps like this one.

General Motors (GM -2.55%), along with many automakers, is in an unusual position to hit two birds with one stone as the automotive industry evolves toward the future of driverless vehicles. That's because it believes electric vehicles are the foundation for autonomous vehicles, and it's rapidly developing technology for both. So far, a large hurdle to overcome is how to profitably make and sell EVs. On Thursday, GM, along with software company Autodesk, Inc. (ADSK 0.56%), gave us a glimpse at one small idea that could help do just that.

Sure, the idea of taking weight out of vehicles at a time when consumers demand improved mileage on larger vehicles isn't a novel idea. Ford Motor Company (F -3.32%) was first to try this, taking a massive chunk of weight out of its bread-and-butter F-Series trucks by using aluminum in some panels instead of steel. In a counterpunch, GM launched 14 new vehicle models with a total mass reduction of over 5,000 pounds. But this is different: GM will be using advanced software design technology from Autodesk to make lighter alternative-propulsion and zero-emission vehicles. 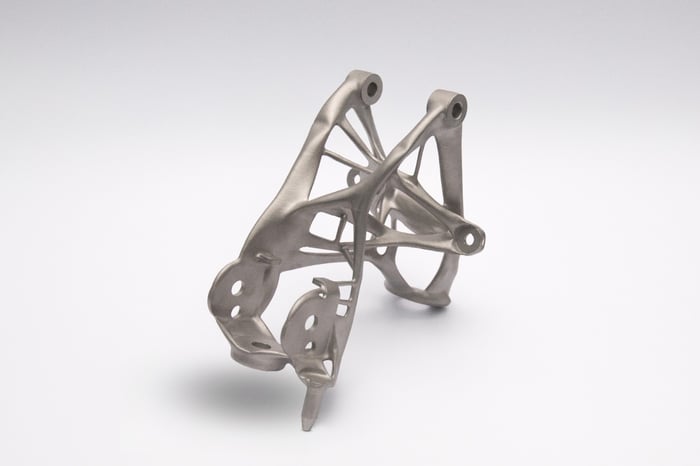 "This disruptive technology provides tremendous advancements in how we can design and develop components for our future vehicles to make them lighter and more efficient," said GM Vice President Ken Kelzer, Global Vehicle Components and Subsystems, in a press release. "When we pair the design technology with manufacturing advancements such as 3D printing, our approach to vehicle development is completely transformed and is fundamentally different to co-create with the computer in ways we simply couldn't have imagined before. "

For those of us scratching our head about exactly how this improved development can work, GM was kind enough to give a simple example: 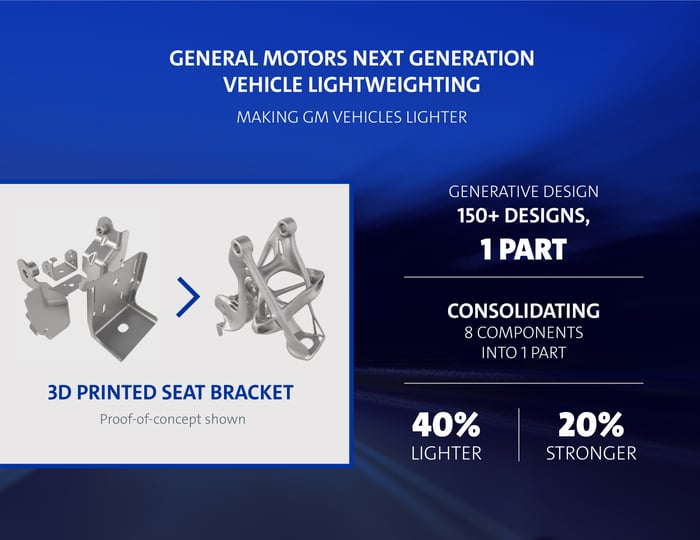 There are a handful of reasons why this is important in the grand scheme of things. For consumers, a reduction in part size and mass could increase a vehicle's interior space for more content and it could also increase the range and performance of EVs. For original equipment manufacturers, it could enable new vehicle shapes and designs that could have a wide range of impacts from improved vehicle functionality to more appealing aesthetics. For investors, it's a move that makes the long-term vision of fleets of driverless electric vehicles -- the foundation for potential autonomous vehicles, car sharing and ride-hailing services -- one step closer. GM estimates that for U.S. passengers, ridesharing currently costs $3 per mile. If that cost per mile drops to $1 (which would be helped by replacing the driver), management suggests, the total addressable market could explode from roughly $20 billion today to a staggering $1.6 trillion.

That driverless-EV future, and its lucrative potential market for automakers, suppliers, technology companies, and everything in between, is in the distance, for now. For that future to arrive sooner rather than later, GM needs to produce a solidly profitable EV with better range. If this software and 3D printing can help Detroit's largest automaker reduce the weight of EVs, improve their performance, and open up designs previously unusable for such vehicles, then these small steps will be great news for long-term investors.