Please ensure Javascript is enabled for purposes of website accessibility
Log In Help Join The Motley Fool
Free Article Join Over 1 Million Premium Members And Get More In-Depth Stock Guidance and Research
By Lou Whiteman - May 7, 2018 at 8:17AM

The company is attempting once again to lessen its dependence on a handful of Boeing programs. There's reason for hope this time they will get it right.

Spirit AeroSystems (SPR 3.52%) has followed through on its pledge to diversify its business away from former-parent Boeing (BA 2.28%), agreeing May 2 to acquire Asco Industries for $650 million in cash.

The strategic rationale for moving beyond Boeing is solid. But it will only work out for Spirit investors if the company can do a better job executing this time around than the last time it attempted to move out from under Boeing's shadow. 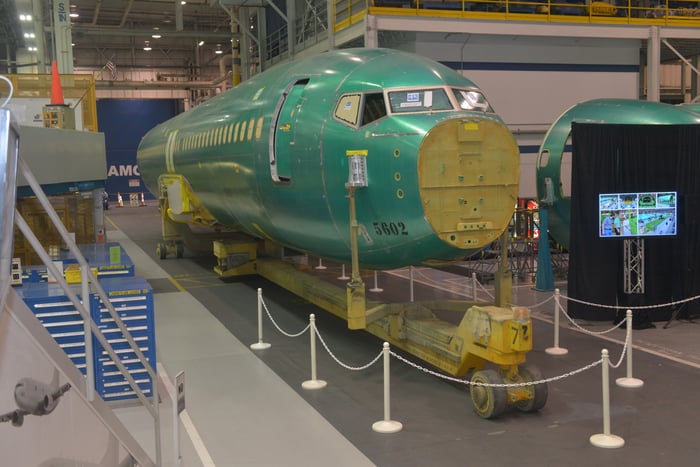 Asco is a $400 million-sales privately held company with operations in North America and Europe. The company supplies wing structures, mechanical assemblies, and other components used on a range of platforms including Airbus and Boeing commercial jets, the F-35 fighter, and other military aircraft.

Spirit was formed from a collection of Boeing production lines spun out as an independent company in 2005. In its early years, Spirit was reliant on its former parent, and its work mostly consisted of the sort of low-margin, non-proprietary operations that companies tend to get rid of when doing spinoffs.

Spirit's initial solution to its overreliance on Boeing was to bid aggressively for non-Boeing work, but that led to profitability issues. The company began a turnaround in 2013, shedding its unprofitable Gulfstream wing assembly operation and other businesses that were added largely for the sake of diversification, restoring profitability but also resulting in a company that today still generates about 75% of its sales from Boeing programs.

Asco would help bring some balance. The target generates about half of its revenue from Airbus, and an additional 30% from other non-Boeing customers. And Spirit execs say they expect the business to grow 10% to 12% annually over the next few years. The company, like Spirit, has already been through the process of weeding out lower-margin programs, creating what Spirit CEO Tom Gentile described as "a very strong performing company."

The deal announcement was made on the same day that Spirit reported first quarter earnings per share of $1.10, missing analyst estimates by $0.25 per share. The shortfall, which was telegraphed to the market, relates to disruptions in Spirit's supply chain as the company scrambles to meet increasing demand for Boeing 737 jets.

Spirit has responded by creating what it calls "SWAT teams" to work with its suppliers, which has increased spending and has eaten into profitability. The company's operating margin for the quarter was 12.4%, down from 15.9% in the same period a year prior, due to the increased spending. On a call with analysts, Gentile said that while some of that added spending will continue into the current quarter, he expects Spirit's delivery schedule to be back on track by mid-year.

The company is holding firm on its full-year guidance and is boosting its return to shareholders. Spirit increased its dividend by 20% last week, and is also planning to repurchase $725 million in shares.

This time it's different

Even if Spirit has figured out how to meet Boeing's aggressive schedule, there could still be turbulence for the company. Boeing's 737 production rate is scheduled to increase again in 2019, around the same time that some of Spirit's business jet customers are also increasing production, placing additional stress on Spirit's facilities.

Presumably management has learned something from this year's 737 production crunch, but some cost increases seem unavoidable. The unemployment rate in Wichita, where the 737 fuselage is produced, currently stands at a 10-year low, meaning any ramp-up will be costly.

Which brings us back to Asco. The company has some excess capacity at its four facilities, which Gentile says Spirit will be able to fill "very quickly." More broadly, Asco's work with Airbus, on the F-35, and with the likes of Embraer and Bombardier, will hopefully mean that the next time costs spike on one particular product line there is enough other business coming in that one line can't ruin a future quarter.

Diversification has always made sense for Spirit, but as its mid-2000s misadventure shows, diversification only works if the right businesses are brought into the fold. Asco appears to be a good fit. This time around, I expect Spirit and its shareholders to benefit from the expansion.