Please ensure Javascript is enabled for purposes of website accessibility
Log In Help Join The Motley Fool
Free Article Join Over 1 Million Premium Members And Get More In-Depth Stock Guidance and Research
By Lou Whiteman - Nov 8, 2017 at 7:18AM

The aerospace-component manufacturer has been a great turnaround story, but it's going to need to find growth to keep the party going.

Aircraft-component manufacturer Spirit AeroSystems (SPR -0.52%), in the doldrums just a few years ago, has rewarded investors who stayed with the company and had faith it could boost profitability. Spirit will now have to climb out from under the shadow of its former parent if it hopes to soar even higher.

Spirit was formed from a collection of Boeing (BA 0.94%) production lines that were spun out as an independent company in 2005. The company, in its early years, did not make for a very attractive investment. Spirit was overly reliant on its former parent, and much of its business was the sort of low-margin, non-proprietary operation that companies tend to get rid of when doing spinoffs. 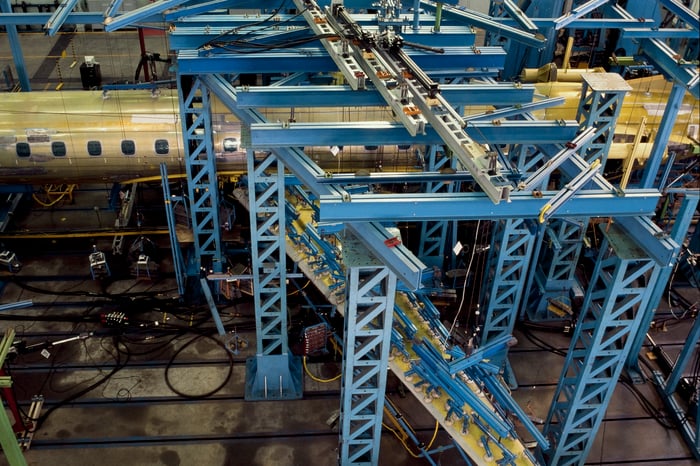 The company went public in 2006 at $26 per share, and saw its value cut in half during the recession. Its initial solution to its overreliance on Boeing was to bid aggressively for non-Boeing work, but that led to profitability issues.

Spirit's turnaround began in 2013 when it hired former Lockheed Martin exec Larry Lawson as CEO. Under his guidance, the company shed its unprofitable Gulfstream wing assembly operation and took other restructuring steps. Spirit generated net income of $469.7 million in 2016 compared to a net loss of $621.4 million in 2013, and has continued that momentum into 2017.

Investors who stayed around have been rewarded, with shares of Spirit up more than 400% in the past five years. 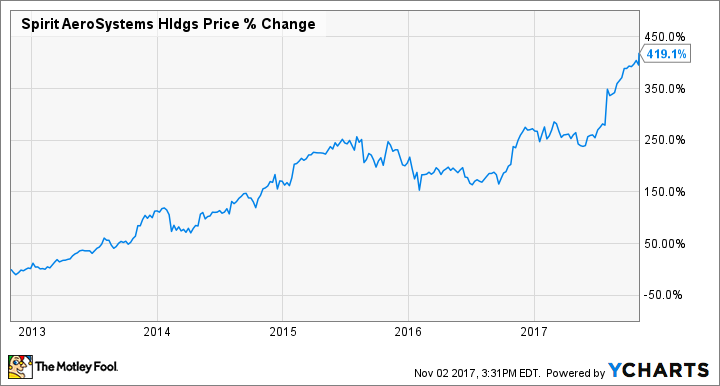 With the restructuring behind it, Spirit's next challenge will be to try again at growth. CEO Tom Gentile, who replaced Lawson last year, told analysts on the company's third-quarter call that the company is evaluating "multiple potential deals," with the focus centered on diversifying a revenue base that still counts on Boeing for about 80% of sales.

"Our M&A [merger and acquisition] target areas are Airbus content, military content, and low-cost country footprint," Gentile said. "Any potential opportunity must meet these strategic objectives as well as our internal return thresholds."

In addition to lessening its exposure to Boeing, Spirit also would likely try to diversify its portfolio in other ways. The company, a maker of fuselages and wings, is overly reliant on the commercial aerospace new-jet cycle and has less exposure to the aftermarket.

Spirit doesn't break out its aftermarket revenue from its total, but analysts with Canaccord Genuity last year estimated that aftermarket represented only about 5% of the company's $6.6 billion in 2015 revenue. That exposure to new jets has come in handy in recent years, with Boeing and Airbus enjoying an eight-year upcycle in deliveries, but it could eat into growth when the cycle inevitably turns. Boeing, meanwhile, has been trying to take much of its spare-part business in-house, a blow to suppliers, including Spirit.

But the company has tried to grow its specialty maintenance business and repair operations, and could use M&A to augment its development of those businesses. Spirit's expertise in using advanced composites to manufacture new airframes can come in handy when those frames need repairs and modifications. The company already operates repair stations in Kansas, Scotland, and (with partners) in China, and seems likely to try to expand that base.

Can they do it?

Spirit AeroSystems has come a long way since its issues earlier in the decade, but that experience is a reminder that attempts to diversify do not come without risk. The company needs to balance a desire to expand with prudence, so it doesn't overspend on an acquisition, or once again bid so low on new business that the additional workload is not profitable.

Spirit does have at least some exposure to every commercial program active at both Boeing and Airbus today, as well as a small amount of work on Bombardier's C-Series jets and other platforms. The supply chain is consolidating -- see United Technologies pending $30 billion cash, stock, and assumed debt deal for Rockwell Collins as one prominent example -- and there likely will be other assets on the market as mid-sized suppliers try to adjust to demands from Boeing and Airbus to cut costs and seek greater economies of scale.

Given the risks to an expansion strategy and how far the stock has come, it' may not a great time to jump into the stock. Spirit currently trades at a trailing-12-month P/E ratio of 29.66, not far from competitor TransDigm Group's 31.22 ratio. TransDigm has strong exposure to the aftermarket and already has much of the diversification Spirit is now trying to achieve.

If Spirit can get the growth strategy right this time and expand its aftermarket presence before the new jet cycle turns, there's a good bit of potential upside in the shares. More than a decade after emerging out of Boeing, this company is finally one to watch.