Please ensure Javascript is enabled for purposes of website accessibility
Log In Help Join The Motley Fool
Free Article Join Over 1 Million Premium Members And Get More In-Depth Stock Guidance and Research
By Evan Niu, CFA - Updated May 8, 2018 at 3:23PM

The Oracle of Omaha and the Mac maker bought approximately 212 million shares combined in the first quarter.

Famed investor Warren Buffett loves Apple (AAPL 0.00%) stock. The Oracle of Omaha has been steadily increasing Berkshire Hathaway's (BRK.A 0.07%) (BRK.B 0.04%) stake over the past couple of years, and it sounds like Buffett has no intention of putting the brakes on buying Apple shares. Berkshire hosted its annual meeting over the weekend, and as usual, Buffett offered up some sage advice to investors looking to emulate his returns.

This morning, Buffett even went as far as to say that he'd like to own all of Apple if he could.

For reference, here's Berkshire's Apple position ever since initially buying shares in back in early 2016. 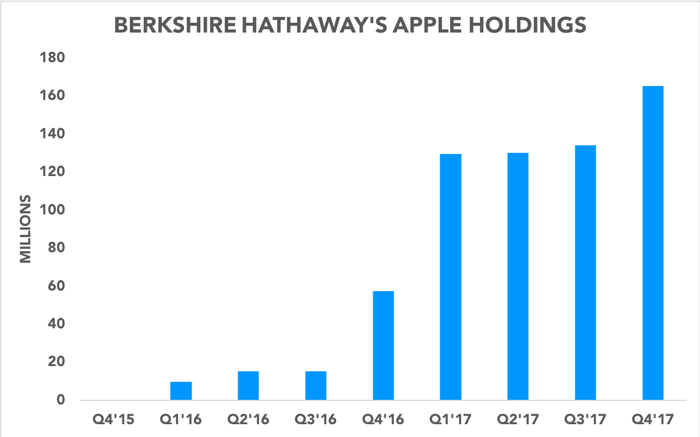 Once upon a time, Buffett suggested to Steve Jobs that Apple should use its growing cash position for share buybacks, but unfortunately, Jobs didn't heed his advice. Things have changed quite a bit in the years since, and under CEO Tim Cook's leadership the company has been buying back stock hand over first, repurchasing a whopping $200 billion in stock since 2012. That includes $23.5 billion repurchased last quarter alone, thanks in large part to tax reform.

Buffett also espoused the benefits of the buyback program, describing the possibility that "in a couple of years we'll own 6% without laying out another dollar" since Apple repurchases shares so aggressively, announcing a new $100 billion repurchase authorization earlier this month. The subsequent result is meaningful earnings accretion of all those profits over time -- a benefit that all long-term shareholders will enjoy.

That $23.5 billion that Apple spent buying back its shares in open-market transactions was enough for about 137 million shares. Between Apple's and Buffett's buying activities, that's approximately 212 million shares being bought during the first quarter.