There's something that feels so wrong about buying a stock at an all-time high. "If only I had bought it six months ago," we tell ourselves. Or perhaps we resolve, "As soon as it drops 20%, then I'll buy back in."

It makes sense on an emotional level. But it also ignores how the stocks of many of the world's greatest companies behave -- they are constantly setting all-time highs. If we wait for a big dip, we might never get a chance to buy shares.

When that's the case, it ends up being best to just bite the bullet and buy. 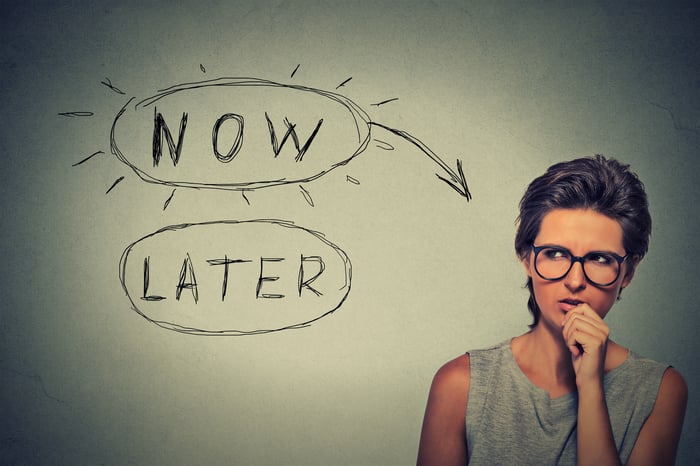 Such is the case with Zendesk (NYSE:ZEN), a software as a service (SaaS) company that reported earnings recently and saw its stock -- surprise, surprise! -- zoom to all-time highs.

Zendesk was founded in 2007 by three Danish friends who were looking to build an intuitive customer-service software solution. Their mission was "to help organizations and their customers build better relationships."

The company's flagship product is Zendesk Support, which helps small and medium-sized businesses (SMBs) track, prioritize, and solve customer complaint tickets on a single, shareable interface. But over the past decade, it has also developed other popular products:

Over the years, Chat has emerged as a popular add-on. But, as you'll see, the company is starting to see significant traction in "Others" as well. 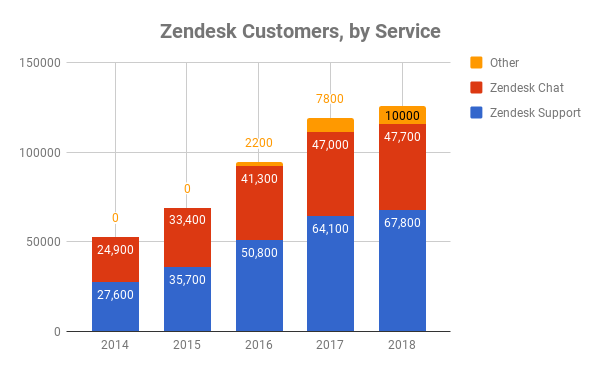 It should be noted that those 2018 numbers represent just one quarter of growth. Clearly, Zendesk has significant momentum among SMBs, having captured over 125,000 subscriptions to its services.

Why Zendesk is worth owning even after the run-up

I wouldn't blame you for thinking that you've missed the boat with Zendesk stock; shares have more than tripled since February 2016. Not only that, but the company has yet to turn a profit, and currently trades for 180 times trailing free cash flow. That isn't cheap.

But there are some serious factors working in the company's favor that will make it a long-term winner. First and foremost, it has a wide and growing moat, thanks to high switching costs and -- increasingly -- the network effect.

Think about it: If you own an SMB and all of your employees are trained on a single customer-service interface, and all of your data is stored on that interface, would you want to switch? Not only would that migration of data be expensive financially, but you'd also have to retrain your entire staff, and risk losing mission-critical data in the process.

One way investors can monitor these high switching costs is by a metric called the dollar-based net expansion rate, or DBNE. In the simplest sense, this measures a combination of churn away from Zendesk products and the number of existing customers signing on to use more of the company's solutions. Since going public, the DBNE has always been above 115%, and it recently grew to 120%. This means that customers are not only sticking around, but they are adding more Zendesk solutions over time as well.

Zendesk's growing size and popularity are starting to help it benefit from network effects. With each customer that joins the platform, the platform itself becomes more valuable. This occurs through two mechanisms:

If that wasn't enough, Zendesk has been making significant strides into the deep end of the pool and focusing on larger enterprise customers. Last quarter, for instance, 38% of monthly recurring revenue came from companies with over 100 agents -- in other words, it came from larger companies. In 2015, this figure stood at just 25%.

Furthermore, the number of contracts closed with values of over $50,000 annually increased 60% in the most recent quarter. That shows that bigger fish are signing on to Zendesk's ecosystem.

What one investor is doing

To be sure, this momentum carries its own risks. Not only is the company forgoing profitability to aggressively reinvest in these opportunities, but it will face heavy competition. Atlassian (NASDAQ: TEAM), for instance, offers many of the same solutions as Zendesk, but has been recruiting larger enterprise customers for far longer.

Shareholders must also consider the added danger if Zendesk were to show any signs of a slowdown in acquiring customers. Because of the stock's rich valuation, such an announcement could cause shares to fall dramatically.

My skin is firmly in the game; shares of Zendesk account for over 2% of my real-life holdings. I'm wary of adding more now, simply because I like my allocation where it is. If you don't own the stock, however, I don't think you should let the all-time highs stop you from adding it to your own portfolio.