Please ensure Javascript is enabled for purposes of website accessibility
Log In Help Join The Motley Fool
Free Article Join Over 1 Million Premium Members And Get More In-Depth Stock Guidance and Research
By Rich Smith – May 8, 2018 at 12:24PM

No one loves Argentina right now, but a 58% profit could change investors' minds.

Argentina's stock market is in a funk.

Argentina elected new pro-business president Mauricio Macri in 2015, sparking a gold rush by investors hoping to cash in. From October 2015 to January 2018, that bet seemed to work out, as the MERVAL (Argentina's stock market) literally tripled in the space of under three years. The last four months, however, have seen a reversal of fortune for Argentine investors, as the MERVAL plunged 25% as the Argentine peso devalued, interest rates soared, and the country appeared headed for a currency crisis.

One analyst, however, doesn't think things look all that bleak. To the contrary, in fact: Morgan Stanley believes you just might find a diamond in the rough in the form of Argentine cement maker Loma Negra Compania Industrial Argentina Sociedad Anonima (LOMA 1.51%). 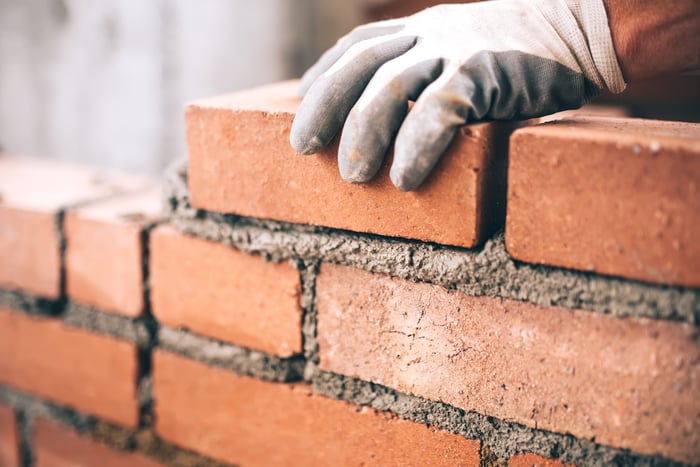 A recent IPO, Loma Negra Compania Industrial has mirrored the rise and fall of Argentina's stock market. Loma went public in October 2017 -- nearly two years to the day after Macri was elected. Loma stock shot up 70% in its first week of trading, and by early January 2018, had nearly doubled off its IPO price.

Unfortunately for investors, Loma shares have been unable to escape the gravitational pull of their home stock market.

The last time we heard from Loma, in November of last year, the company was doing just fine. Sales were up 54% year over year in Q3 2017 when valued in pesos. Gross margin had grown 381 basis points to 27.9%, and profits had more than doubled. With the currency crisis, though, Loma stock has come crashing down, and lost nearly 35% of its value since hitting its high in January.

This, in Morgan Stanley's view, provides investors a second bite at the apple on Loma stock, and a chance to cash in big time. Calling Loma "Argentina's cement leader," Morgan Stanley argues that the company is "the best way to play the country's infrastructure recovery story," in a note covered by TheFly.com.

Loma doesn't have a long history as a publicly traded company, but according to Morgan Stanley, "the stock's recent pullback has put it at a roughly 29% discount to its ... average valuation" over what short history it does have. As investors get over their fear of investing in Argentina in general, and begin to focus on Loma's success in particular, the banker argues Loma stock should regain its earlier highs, and even surpass them -- rising to $26 a share over the next 12 months, and delivering new investors as much as a 58% profit.

Little wonder the analyst has upgraded Loma stock to overweight.

Is Morgan Stanley right about that? Let's take a look at the numbers.

Unlike many IPOs, which come to market unprofitable and laden with unsustainable levels of debt, Loma actually looks in fine financial fettle these days. The company's income statement shows Loma earning a respectable $73 million in net profit over the last 12 months, versus a market capitalization of just $2.1 billion (giving Loma stock a P/E ratio of 29). The company's cash flow statement is simply brimming with pesos, which translated into $105 million in free cash flow produced over the last 12 months, according to the data miners at S&P Global Market Intelligence (44% more cash profit than reported income). Finally, this cement maker's balance sheet is rock-solid, with net debt a mere $54 million.

Add it all up, and Loma stock sells for an enterprise value of about 21 times free cash flow.

How does this valuation compare to Loma's growth prospects? Analysts who follow the stock estimate simply fantastic growth rates for Loma, ranging from 52% to 60% annually over the next five years. Earnings are expected to nearly double this year in comparison to 2017's numbers (which as we saw, were already quite good). By 2020, analysts expect to see Loma's profits double again, to as much as $2.06 a share, before slowing down to more sustainable growth rates in 2021 and beyond.

So is Loma a buy or not? I admit, I personally look with skepticism when I see analysts predicting growth rates of 50% and beyond -- and more so than usual when we're talking about a commodity cement maker.

Still, Loma is a small company operating in a developing market. Theoretically, I suppose the stock could grow that fast. But even if it doesn't -- even if Loma grows only half as fast as the analysts are predicting -- well, 21 times free cash flow wouldn't seem too much to pay for a 25%-plus growth rate, in my book.

Loma Negra Compañía Industrial Argentina Sociedad Anónima is worth a look. I think Morgan Stanley might just have found itself a winner here.

Grupo Supervielle, Loma Negra, and Transportadora de Gas: Why These Argentine Stocks Bounced Back on Tuesday

Wall Street Has Given Up On These 3 Stocks, and That's a Huge Mistake