Please ensure Javascript is enabled for purposes of website accessibility
Log In Help Join The Motley Fool
Free Article Join Over 1 Million Premium Members And Get More In-Depth Stock Guidance and Research
By Adam Levy - May 8, 2018 at 9:25AM

Roku looks to keep pace with the growth of streaming video, despite competition.

Roku (ROKU -5.70%) reports its first-quarter earnings after the bell on Wednesday. The company ended up beating analysts' expectations for the fourth quarter, but the stock price fell sharply after revenue guidance for the first quarter came in lower than Wall Street was expecting.

Roku's management told analysts to expect revenue between $120 million and $130 million for the first quarter. They had been expecting nearly $132 million on average, but have since lowered their expectations to an average of just $127.15 million. Analysts expect that to result in about $0.15 in loss per share.

But investors will have to look past the headline numbers to fully understand the health of Roku's business. Here's what to watch when Roku reports its first-quarter earnings on Wednesday. 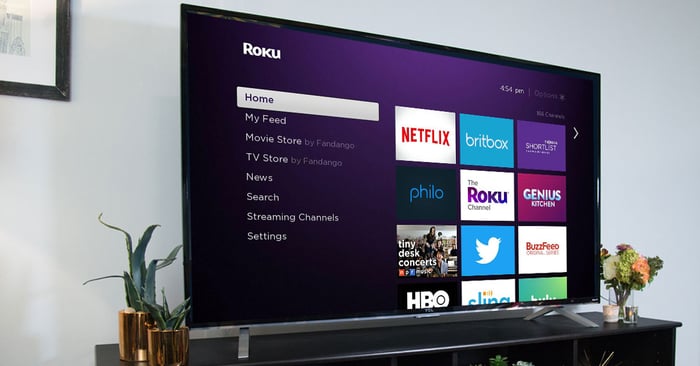 One of the big concerns investors had about Roku's fourth-quarter results was the company's year-over-year decline in player revenue. The 7% decline was a result of a shift to lower-priced devices such as the Roku Express, as well as price cuts to its high-end devices.

Roku introduced the Roku Express in the fourth quarter of 2016, so some of the impact from that low-end device should be completely absorbed. Still, the company faces pricing pressure from competitors like Amazon (NASDAQ: AMZN) and its Fire TV devices.

Regardless, investors should expect to see a continued shift in revenue toward Roku's platform business, which primarily consists of advertising. In fact, the entire point of the player business is to establish the platform business.

In the fourth quarter, platform revenue grew 129% year over year and made up about 45% of total revenue. The growth of Roku's ad business, hours spent on Roku devices, and its Roku Channel should support continued rapid expansion of the platform business.

Another thing to keep an eye on in Roku's earnings release is its gross margins. Roku separates out gross margin for both player and platform revenue, and investors should expect to see a decline in both.

Roku's management believes Amazon and other competitors are selling at least some of their devices below cost. Amazon can afford to, as its Fire TV devices support its Prime subscription business, which in turn supports its retail business. With a booming platform business, Roku is now also in a position to afford a lower gross margin on its players to grow its user base.

The platform business is historically a very high-margin business. In the fourth quarter, Roku's platform business generated a gross margin of 74.6%. That's actually down a few percentage points from its historical average as Roku sells more video ads, which have lower margins than its display ads and app distribution revenue. The growth of video ads ought to continue in the first quarter as The Roku Channel becomes increasingly popular.

Overall, however, as more revenue shifts to the platform segment, consolidated gross margin ought to expand nicely, pushing Roku closer toward profitability.

Roku provides some insight into its users in its letter to shareholders.

It ended last year with 19.3 million active accounts after adding 2.6 million in the fourth quarter. Investors shouldn't expect nearly as many additions in the first quarter, since the fourth quarter benefits greatly from seasonal sales of Roku's players. Still, with an increasing number of smart TV partnerships, Roku may be able to beat its net additions from the first quarter last year and grow past 20 million active accounts.

Streaming-hours growth continued to outpace active-account growth last year as Roku users found more to watch on their devices. The combination of cord-cutting and the emergence of over-the-top alternatives to linear TV should continue to fuel that trend. The Roku Channel might also boost streaming hours as well. Investors should look for growth in streaming hours to continue outpacing growth in active accounts.

More streaming hours per user should help increase average revenue per user. Roku brought in $13.78 per user in 2017, up 48% from 2016, and that number should continue climbing in the first quarter. As marketers look for alternatives to television advertising, Roku presents an excellent option, and it recently revamped its advertising products to take advantage of its unique position with streaming video viewers.

Keep an eye on all these metrics to ensure they continue trending in the right direction. They're integral to Roku's platform business, which is the main growth engine for Roku going forward.