Please ensure Javascript is enabled for purposes of website accessibility
Log In Help Join The Motley Fool
Free Article Join Over 1 Million Premium Members And Get More In-Depth Stock Guidance and Research
By Jeremy Bowman - Updated May 8, 2018 at 1:28PM

Shares of the fast-casual restaurant operator were moving higher on a strong earnings report.

Shares of Fiesta Restaurant Group Inc. (FRGI -0.86%) were moving higher today after the parent of fast-casual chains Pollo Tropical and Taco Cabana posted better-than-expected results in its first-quarter earnings report. Margins improved at Pollo Tropical, and comparable sales increased at both chains in April after the quarter ended. 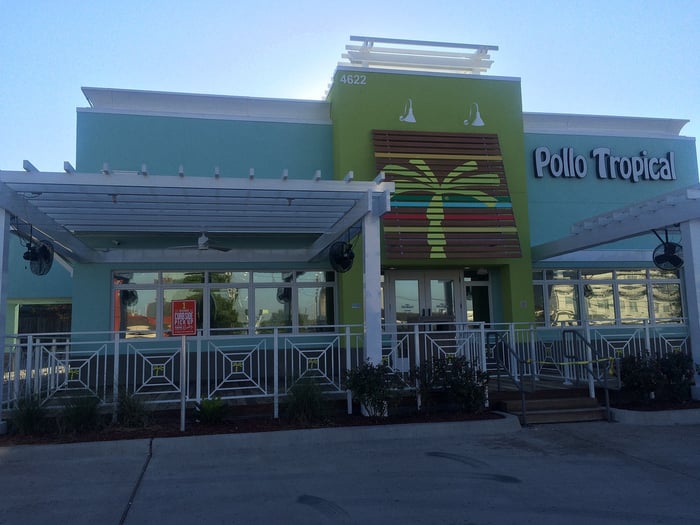 The Fiesta Group said same-stores sales increased 1.1% at Pollo Tropical, but fell 1.7% at Taco Cabana in the period. Still, that was a considerable improvement from the year before. Due to the declines at Taco Cabana and the closing of unprofitable restaurants, overall revenue slipped 3.5% to $169.5 million, but that beat estimates at $164.3 million.

On the bottom line, an adjusted profit per share of $0.25 fell to $0.15, but that still edged out expectations by a penny. Investors seemed to cheer the company's progress in its strategic turnaround, especially the signs of growth in April.

CEO Richard Stockinger said, "We believe our [strategic] plan is driving intended operational and financial performance improvements," adding that the new hand-battered, citrus-marinated chicken at Pollo Tropical has been extremely successful. He also said that improvements at Taco Cabana were following in line with Pollo Tropical, where the company first implemented its strategic plan.

Fiesta Group stock seems to be rising today in part because it had fallen so far during the last few years as the "restaurant recession" squeezed much of the industry. Even after today's gains, the stock is still down 53% over the last three years.

With comparable sales up 2.8% at Pollo Tropical and 0.9% at Taco Cabana in April, momentum clearly seems to be building. If the company can deliver improvement on the bottom line as well, the stock should continue moving higher.