Plant-based protein company Beyond Meat (NASDAQ:BYND) kicked off 2020 with news that it has partnered with Pollo Tropical, owned by Fiesta Restaurant Group (NASDAQ:FRGI). Pollo Tropical is offering two limited-time offers featuring the Beyond Beef product. Both the Vegan Tropichop and Wrap are already available across the chain.

In a December interview, Beyond Meat CEO Ethan Brown fueled enthusiasm by suggesting some exciting things would be coming from the company in 2020 related to poultry.  Unfortunately for investors, this partnership with Pollo Tropical is not the much-hyped launch of a chicken alternative. But it's still newsworthy for both investors of Beyond Meat and Fiesta Restaurant Group. Here's why. 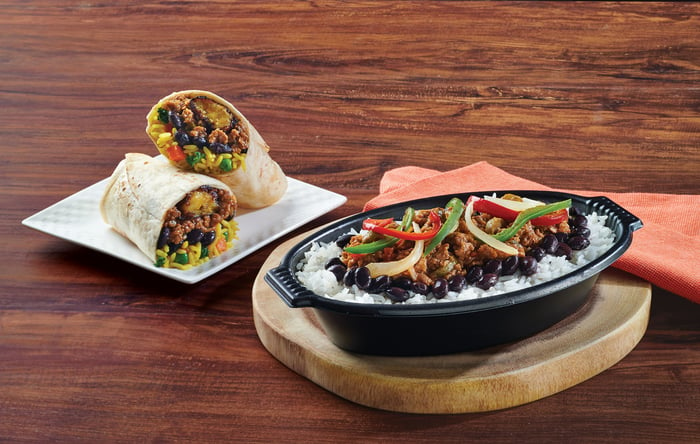 Pollo Tropical is taking its bold flavors beyond chicken with the launch of a Vegan Tropichop and Wrap featuring a “picadillo” made with Beyond Meat. Image source: Pollo Tropical

What this means for Beyond Meat

Beyond Meat is a company that develops non-GMO plant-based meat alternatives. Currently, the company has a ground beef alternative and a pork sausage alternative. The company doesn't offer direct-to-consumer sales. Rather, it relies on grocery distribution channels and restaurant partnerships. Because of this, any time it gains a new partnership, it's good news for investors, since that's the main way the company grows sales. And it goes without saying that revenue growth is crucial for a growth stock like Beyond Meat.

Granted, since Pollo Tropical is a small chain with only 172 locations (mostly in Florida and Georgia), this particular partnership isn't likely to move the needle much for Beyond Meat. It pales in comparison to its partnership with the 9,000-location Dunkin' Brands, which offers the Beyond Sausage Sandwich (launched in November). This launch, although it happened on the consumer end during the fourth quarter of 2019, likely happened for Beyond Meat in the third quarter, which explains how net revenue spiked 250% year over year, and 37% quarter over quarter.

Beyond Meat's revenue is recorded when it ships the product, rather than when it sells through to the customer. In its Q3 earnings call, management said it expects Q3 2019 revenue to be the strongest quarter for the year -- presumably because of the Dunkin' rollout. Considering it's guiding for $275 million in revenue for 2019, and it's already recorded $199 million, the company should report revenue of $76 million on the high-end next quarter, which is a sequential drop.

What this means for Fiesta Restaurant Group

A partnership with Beyond Meat is potentially needle-moving news for Fiesta Restaurant Group. Revenue for the company fell 6% year over year in the third quarter, mostly due to declining comparable sales. It owns two brands -- Pollo Tropical and Taco Cabana --and comparable sales fell 3.8% in Q3 at the Pollo Tropical brand. That must turn around.

A limited-time menu offering might just be the ticket. Consider that Burger King, owned by Restaurant Brands International, just notched a 5% comparable sales gain in the third quarter -- the best quarterly result for the brand since 2015. This comp-sales growth was largely attributed to the launch of the Impossible Whopper -- a plant-based hamburger product from Impossible Foods, a Beyond Meat competitor. Pollo Tropical could see a similar boost in traffic with its Vegan Tropichop and Wrap launch.

It's still too early to say whether Burger King's sales boost was driven by genuine consumer demand or fleeting curiosity, but Fiesta Restaurant Group will hope it's the former. The company has plans to begin opening new restaurant locations upon developing an expansion strategy. Opening new locations when comparable sales are declining is generally a bad idea. Investors should watch this when the company reports its fourth-quarter earnings next month.

Still waiting on the big one

These numbers show that the chicken market opportunity is huge. While a plant-based chicken alternative is still noticeably absent from Beyond Meat's products, it seems like we could get some news any day. The company recently tested a product at a Kentucky Fried Chicken (owned by Yum! Brands) in Atlanta that sold out in under five hours. And as already noted, Brown teased an upcoming "poultry" rollout sometime soon. Investors should sure hope so. Considering the stock currently trades at over 22 times revenue, the company needs as many revenue-growth drivers as it can find.