Please ensure Javascript is enabled for purposes of website accessibility
Log In Help Join The Motley Fool
Free Article Join Over 1 Million Premium Members And Get More In-Depth Stock Guidance and Research
By Jeremy Bowman - May 8, 2018 at 4:28PM

The parent of Men's Wearhouse and Jos. A. Bank surged as investor faith in its turnaround continued to grow.

Shares of Tailored Brands, Inc. (TLRD) continued to run higher last month as momentum for the menswear retailer's turnaround continued to build. According to data from S&P Global Market Intelligence, the stock gained 26% last month. During April, the company launched a new omnichannel customer service, but its stock mostly seemed to move higher on little news.

As the chart below shows, Tailored Brands' stock moved steadily higher over the course of the month. 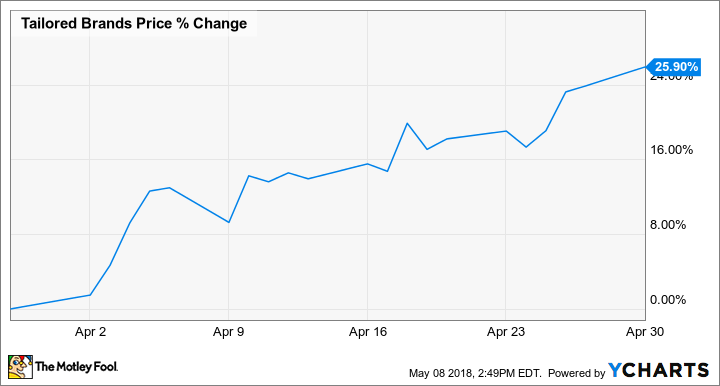 Despite a sell-off following its March earnings report, Tailored Brands, the parent of Jos. A. Bank and Men's Wearhouse, saw shares move higher in early April. Investors seemed to buy into the turnaround evidenced in the latest earnings report as Jos. A. Bank posted its first quarterly sales increase since 2014. Comparable sales at the once-struggling brand rose 5.3%, and the company posted break-even earnings results against expectations of a -$0.11 per-share loss. 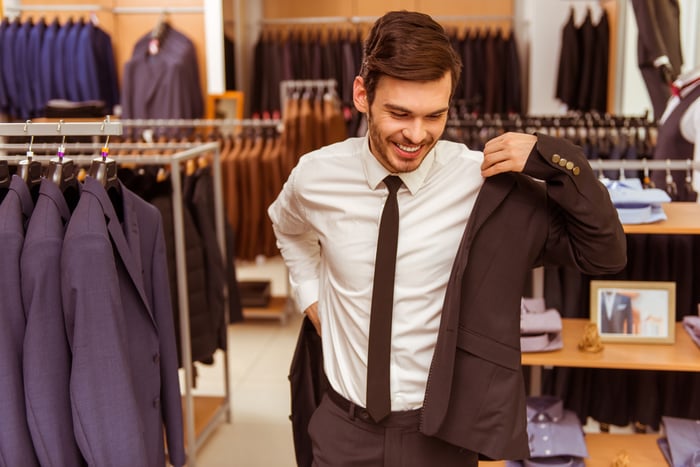 Later in the month, the stock gained again as the company introduced a new partnership with Hero, which connects online shoppers live with in-store sales associates. Tailored Brands said Hero's technology would "marry millions of TBI's online customers with the same level of world-class in-store service its customers have come to expect in one seamless, integrated experience."

Shares increased 4.5% on April 18 when the company announced that partnership.

Tailored Brands' stock has now more than doubled over the past year, up 137% as the company's turnaround has built up steam. The stock had been beaten down so far that it is still significantly below its value before Men's Wearhouse acquired Jos. A. Bank, as the new brand weighed down the larger company. However, with comparable sales moving higher and profits building, the stock could see more gains as management focuses on its growth strategy of expanding its custom business, strengthening its brands, and enhancing the omnichannel experience. The acquisition is finally starting to look like it could pay off.