Please ensure Javascript is enabled for purposes of website accessibility
Log In Help Join The Motley Fool
Free Article Join Over 1 Million Premium Members And Get More In-Depth Stock Guidance and Research
By Jordan Wathen - May 9, 2018 at 6:00AM

Business development company (BDC) Main Street Capital (MAIN 0.86%) reported earnings that were better than Wall Street's expectations thanks to a healthy haul of dividends from investments in its smallest portfolio companies. It reported net investment income of $0.63 per share, well above the consensus estimate of $0.59 per share in the first quarter.

After looking through its latest results and conference call transcript, there were three things that stuck out as items all shareholders should know about.

Whereas other BDCs invest almost exclusively in debt, Main Street Capital makes large debt and equity investments in small, private businesses. Equity investments made up about 30% of the portfolio at fair value last quarter, far more than the 10% of assets the prototypical BDC dedicates to equity holdings. 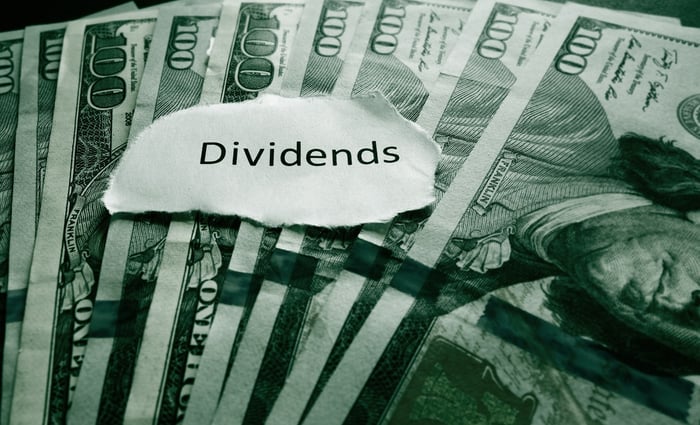 Though equity investments expose the company to greater risk when economic tides turn, they also offer additional upside from capital appreciation and dividends. This quarter, dividends stole the show, as dividends from its portfolio companies made up nearly 25% of total investment income (revenue). Historically, dividend income strikes a seasonal high in the fourth quarter. 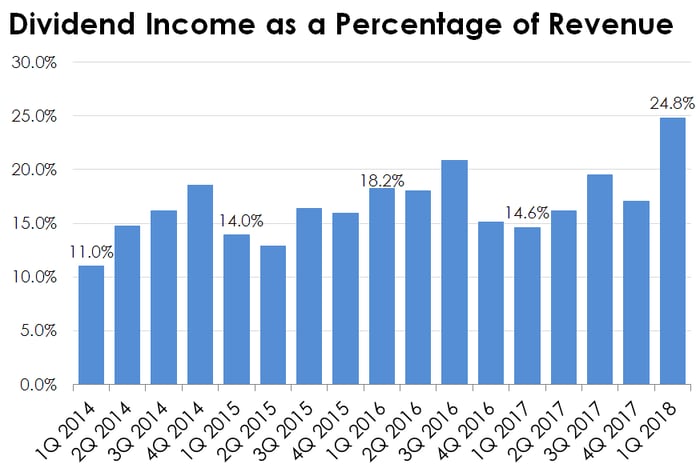 In its earnings release and on the conference call, Main Street Capital referred to some of this dividend income as one-time in nature. After a look over its disclosures, its not hard to figure out which dividends are unlikely to be repeated, as one company (CBT Nuggets) accounted for roughly 44% of dividend income this quarter. In addition, Main Street Capital received dividends from two companies that were sold during the quarter.

Speaking of CBT Nuggets, the company was marked down this quarter after a big write-up last quarter. Management said the volatility in its valuation related to cryptocurrency the IT training company owns. If you own Main Street Capital, you have some indirect exposure to bitcoin. Who would have thought?

2. On the hunt for money to manage

One thing that differentiates Main Street Capital is its lucrative asset manager. The company manages a private BDC known as HMS Income Fund, collecting fees roughly equal to 1% of its assets plus 10% of its annual returns. This relationship allows Main Street Capital to earn income without putting shareholder capital at risk, which is as good as it gets.

On the conference call, Main Street's CEO, Vince Foster, who will step down later this year, said that the asset management business is one it's actively looking to grow.

Yeah. We're always thinking about and looking at other opportunities to leverage the talent that we have here without necessarily running a check and I would say that, if there is not an HMS 2.0 type vehicle within the next 12 or 18 months, there's a high likelihood that you will see something else get done that would involve us as an advisor, sub advisor or something. There are just that many opportunities out there.

Main Street's asset management business helped defray roughly $2.1 million of expenses, and it paid a dividend of roughly $0.6 million, for a total of $2.7 million in benefits to the parent company in the first quarter.

I suspect something new may already be in the works. In its earnings press release, Main Street Capital said it passed on about $500,000 of additional expense to its asset management business in the first quarter due to "elevated non-recurring strategic activities at the External Investment Manager."

Main Street Capital put a lot of money to work in the lower middle market this quarter, investing in several lower middle market companies, according to data compiled by Thomson Reuters BDC Collateral. Some of its particularly large investments are included in the table below.

Main Street's lower middle market investments are its "special sauce," helping it generate outsize returns from taking a large equity stake in the companies in which it invests. Investors will be pleased to find that one of its largest lower-middle-market investments, Gamber-Johnson Holdings, is performing spectacularly, based on quarterly changes in its fair market value and disclosures regarding its loan and dividend payments.

As the company is based in Houston, Texas, many of its legacy investments are located in Houston and Texas, generally. With oil prices topping $70 for the first time since 2014, and local spending increasing as the area recovers from Hurricane Harvey, these headwinds to earnings could be a boon going forward.