Please ensure Javascript is enabled for purposes of website accessibility
Log In Help Join The Motley Fool
Free Article Join Over 1 Million Premium Members And Get More In-Depth Stock Guidance and Research
By Rich Duprey - May 9, 2018 at 8:03AM

Harley-Davidson's (HOG 1.01%) half-million-dollar bet to win back its racing crown isn't going as planned. Although it's still early in the 20-race American Flat Track racing season, rival Indian Motorcycle is looking as if it's going to repeat its dominating performance of last year.

What's at stake is more than just bragging rights about which motorcycle company has the better racing team. In an industry suffering from flagging sales, race results highlight each bike maker's technology, innovation, and prowess in building a top performance machine. And that could help provide an edge at dealerships. With Harley once again falling behind Indian's owner Polaris Industries (PII 0.43%) in the early going, it could give Indian the momentum to keep driving sales higher. 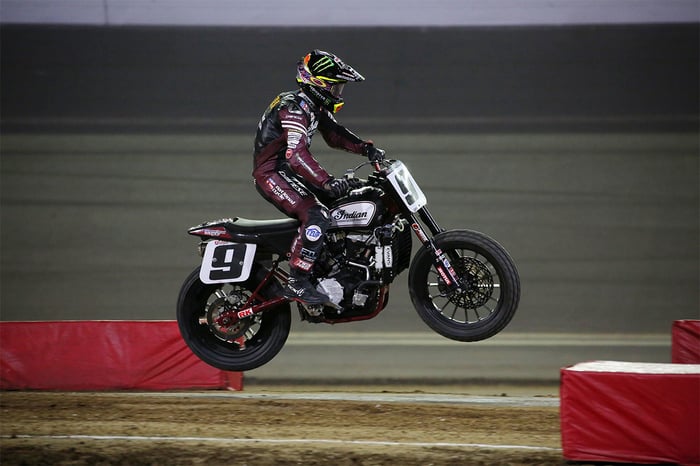 Harley-Davidson made winning this year's flat-track racing title a top priority. It committed to spending as much as $562,500 for the 2018 American Flat Track contingency program, the largest in cash awards ever put up in the 65-year history of flat-track racing. It was also nearly six times more than the bike maker's program two years ago, when it didn't have to contend with the Indian Wrecking Crew (as the team is known) challenging its leadership. Indian is offering $358,000 in awards, and Kawasaki is next in line with $356,000.

In 2016, Polaris unveiled its purpose-built Scout FTR750 bike. It has a  proprietary liquid-cooled, 750 cubic centimeter engine developed by its elite swissauto division specifically for the flat-track circuit. It took on the first new racing bike Harley built in 44 years, the equally impressive XG750R, and last year was the first time the two went head to head.

Indian's racing team dominated the 2017 American Flat Track season with 14 wins in 20 races, 37 podium appearances (meaning a top-three finish), and six podium sweeps. It's looking like 2018 may be a repeat performance. Harley-Davidson and Indian have competed in only three of 20 planned races so far, but Indian is dominating the circuit once again.

Racing to the dealership?

Could Indian's dominance of flat-track racing be helping sales? Quite possibly. Toyota maintains that its winning the Nascar driver and manufacturer championships has boosted its car sales, and there's a long-standing saying in racing of "win on Sunday, sell on Monday," suggesting that whichever car wins a Sunday Nascar race sees a boost in sales on Monday.

Both motorcycle manufacturers say the industry is in a tailspin. Harley says the market for motorcycles with engines 601 cc and larger was down over 11% in the first quarter, while Polaris the 900 cc and above market was down by mid-teen percentage rates, continuing the decline seen in preceding years, but are a markedly steeper loss.

Flat-track racing also appeals to the younger demographic bike makers seek. American Flat Track says 49% of its Facebook fans are 18-to-24-year-olds, and it has high teen percentages for 13-to-17-year-olds. Although male dominated like much of motorcycling, some 19% of flat-track racing fans are female, one of the fastest growing segments of the motorcycle riding population.

Harley-Davidson has been the reigning flat-track racing champ for years prior to Indian's comeback, but if Polaris' technological prowess in bike-building is handily beating Harley's, that can easily bring more buyers into an Indian dealership than a Harley one. And perhaps it already is as demand for street version Scouts remain particularly strong.

That suggests Harley-Davidson might have better spent its contingency money elsewhere. Sure, it obviously won't have to actually spend the money if the racers don't win, meaning the money will still be available, but it was ready to forego investments in building bikes that buyers actually want to win a racing title. Smaller, less expensive bikes might move the sales needle just as much.

Now with Indian Motorcycle proving it has an edge on the racetrack as well as on the sales floor, it's becoming clear Harley-Davidson's massive racing contingency program was a wasted effort.