Please ensure Javascript is enabled for purposes of website accessibility
Log In Help Join The Motley Fool
Free Article Join Over 1 Million Premium Members And Get More In-Depth Stock Guidance and Research
By Maxx Chatsko – May 9, 2018 at 2:56PM

The wild ride continues for investors.

Shares of generic drug manufacturer Mallinckrodt PLC (MNK) rose over 15% today following a wild several days of trading. On Sunday, 60 Minutes ran a segment detailing how the company's blockbuster drug H.P. Acthar Gel devastated the town of Rockford, Illinois with what were characterized as unreasonably high medical bills. It represents just under half of total revenue.

The company has also come under intense scrutiny in recent years as a leading distributor of opioid drugs -- and watched its market cap sink from over $13 billion to just $1.1 billion in the process. The latest controversy regarding H.P. Acthar Gel risks making the company the poster child of healthcare's two largest issues: the opioid epidemic and uncontrollable drug prices.

Today's pop is a product of both the recent volatility and first-quarter 2018 operational results that were released yesterday. Investors are encouraged by some of the targets for the year ahead. 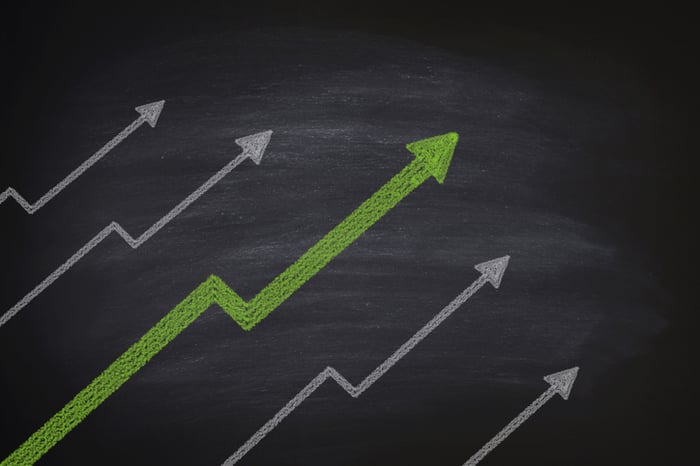 Mallinckrodt posted some signs of progress during the first quarter of 2018 compared to the year-ago period. Sales of the now-controversial H.P. Acthar Gel actually fell 10% in the comparison periods, although management still expects the product to deliver $1 billion in revenue for the full year.

The enthusiasm among investors can be chalked up to one stat: Mallinckrodt expects free cash flow of at least $500 million in 2018 -- even though it posted negative free cash flow in the first three months of the year. If the company can deliver, then it may be able to escape its rut.

Management also announced that the acquisition of Sucampo had closed and that it has wound down its specialty generics disposal unit. That could save expenses, despite resulting in one-time charges in recent periods related to the transactions.

Whether or not investors think progress is being made, the fact is that Mallinckrodt has not been very good at creating shareholder value over the years. A roughly 90% drop in both share price and market cap proves that much. The company serves as a reminder that non-market factors, such as scrutiny over business practices related to drug pricing and opioid distribution, often can be more important than the financial numbers put up by a business when weighing the merits of an investment.