Please ensure Javascript is enabled for purposes of website accessibility
Log In Help Join The Motley Fool
Free Article Join Over 1 Million Premium Members And Get More In-Depth Stock Guidance and Research
By Keith Speights - May 9, 2018 at 2:31PM

The drugmaker's revenue was helped by currency fluctuations, while a big first-quarter tax benefit boosted earnings.

Last year wasn't all that great for Mylan N.V. (MYL). However, the drugmaker began to see some signs of improvement when it reported its fourth-quarter results at the end of February. And Mylan's outlook pointed to a better year in 2018.

Mylan announced its first-quarter results before the market opened Wednesday. Did the company actually get off to a better start this year than it did in 2017? Here are the highlights from Mylan's first-quarter update. 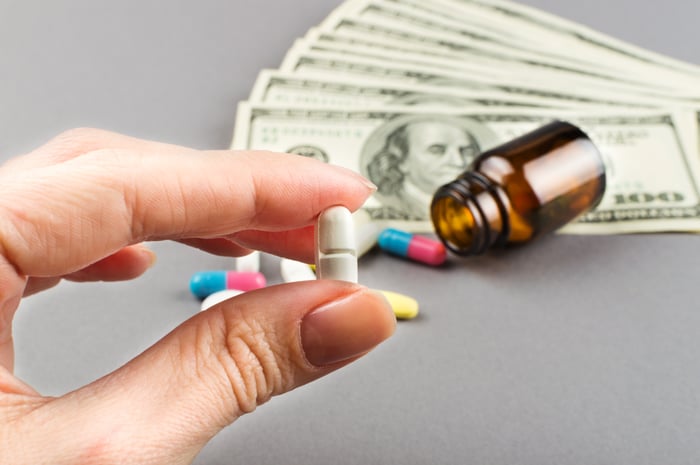 Mylan continued to experience some of the same challenges in the first quarter that it encountered last year. North American net sales dropped 19% year over year to $985.3 million. This decline stemmed from several factors, including loss of exclusivity on the company's olmesartan products, lower sales of branded products (especially EpiPen), the divestiture of some contract manufacturing assets, and the impact of the adoption of new accounting standards beginning this year.

The drugmaker benefited from growth outside of North America, though. European sales jumped 16% year over year to $1.04 billion. Sales in the rest of the world increased 8% to $626.7 million. However, these sales results were boosted significantly by foreign exchange fluctuations. On a constant currency basis, Mylan's sales increased by 2% year over year in Europe and by 3% in the rest of the world.

Mylan's big jump in GAAP net income also came with an asterisk. The company had a U.S. income tax benefit of $76.6 million in the first quarter of 2018, compared to a tax hit of $5.2 million in the prior-year period.

First-quarter non-GAAP adjusted EPS was in line with Mylan's expectations. The modest growth in adjusted EPS resulted primarily, however, from stock buybacks that reduced the number of outstanding shares by 3.7% year over year.

Mylan's first quarter demonstrates continued execution on our long-term plan. Our diversity and durability are what allow us to absorb evolving industry dynamics and natural market volatility, while at the same time accelerate our mission of providing access to high quality medicine. Further demonstrating our commitment to access, I am pleased to share our newly released 2017 Global Social Responsibility Progress Report available at mylan.com.

We continue to benefit from our diversified and durable global platform, with solid revenue performance from both our Europe and rest of world segments. We also continue to execute on our key pipeline programs, as outlined during our recent Investor Day, while maintaining our confidence in our ability to bring these important products to market. From an operational standpoint, we are continuing to execute on our integration activities to further optimize our cost structure, at the same time we are investing across our business in areas such as sales and marketing of several global key products. These actions helped to support our performance during the quarter, and we expect to continue this execution throughout 2018.

Mylan reaffirmed its full-year 2018 guidance provided earlier this year. The company continues to project 2018 revenue between $11.75 billion and $13.25 billion. The midpoint of that range reflects a year-over-year increase of 5%. Mylan expects full-year adjusted EPS between $5.20 and $5.60 -- an 18% year-over-year jump. The company also still thinks that adjusted free cash flow generated in 2018 will be between $2.1 billion and $2.5 billion.

There are several things that investors should watch in the coming months. Mylan has experienced some intermittent supply issues resulting from manufacturing delays with Pfizer, which makes both branded and authorized generic versions of EpiPen. It's possible that these issues could exacerbate Mylan's challenges in North America.

While it's possible that Mylan could make some acquisitions this year, one seems to be off the table. The company stated in April that a Reuters report that Mylan was seeking to acquire Merck KGaA's consumer business was "untrue."