Please ensure Javascript is enabled for purposes of website accessibility
Log In Help Join The Motley Fool
Free Article Join Over 1 Million Premium Members And Get More In-Depth Stock Guidance and Research
By Joe Tenebruso - Updated May 11, 2018 at 10:12AM 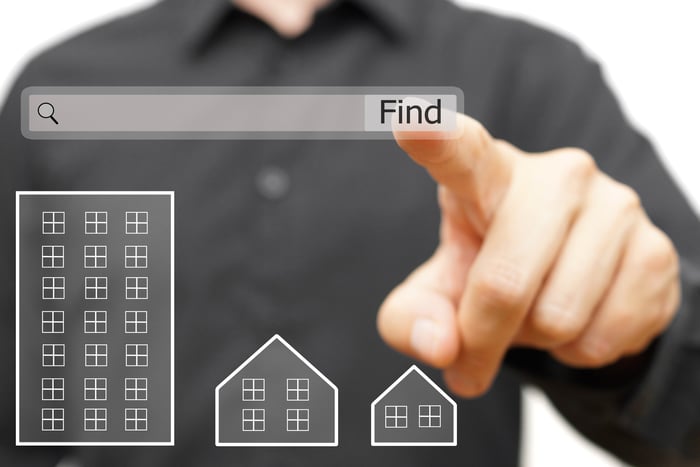 Moreover, Zillow Group is getting better at monetizing this growing traffic: Premier Agent revenue per visit increased 6% to $0.121.

"Zillow Group had a great start to 2018 and we are already executing well on our strategic priorities for the year," CEO Spencer Rascoff said in a press release. "First quarter 2018 revenue growth was driven by strength in the Premier Agent, Rentals, and New Construction marketplaces."

Premier Agent revenue leapt 22% to $213.7 million, fueled by a 58% spike in the number of Premier Agent accounts spending more than $5,000 per month on Zillow's platform. Importantly, these agents appear to be receiving a strong return on their advertising spend, as evidenced by a 38% jump in total sales to Premier Agents who have been customers of Zillow for more than one year.

Premier Agent revenue growth for the first quarter of 2018 accelerated sequentially over the fourth quarter of 2017. Bookings in the first four months of 2018 are up 28 percent year-over-year and new advertiser account adds for the first four months are the highest we've seen since 2015. The Premier Agent business is growing fast and is still dramatically under-penetrated relative to its overall potential.

Additionally, rentals revenue soared 35% to $29.1 million, and other revenue -- which includes Zillow Group's new construction marketplaces, dotloop, and display businesses, among others -- surged 33% to $38.1 million. Mortgages revenue, however, fell 6% to $19 million, due in part to higher interest rates, which negatively impacted refinance volume.

For the second quarter, Zillow expects total revenue of $322 million to $327 million and adjusted EBITDA of $49 million to $57 million.

Additionally, Zillow said that it expects to hold 300 to 1,000 homes in inventory as part of its new house-flipping business by the end of 2018.

"This year, we are taking our business beyond lead generation by creating better experiences for consumers and further strengthening our partnerships with real estate professionals," added Rascoff. "Our opportunity is expanding with the introduction of innovative products and services, like Zillow Instant Offers, that provide end-to-end solutions for consumers and will generate more home-related transactions across our platforms. It will be an exciting year as we begin the next phase of Zillow Group's growth."