Shares of Darling Ingredients Inc. (NYSE:DAR) climbed as much as 11.6% early Thursday, then settled to trade up 8.6% as of 12:30 p.m. EDT after the rendering and biodiesel specialist announced strong first-quarter 2018 results.

Darling's quarterly revenue fell 0.4% year over year as reported, to $875.4 million -- though revenue would have arrived at $921.6 million had it not been for a $46.2 million reduction from the adoption of new (ASC 606) accounting standards at the start of the year. On the bottom line, that translated to net income of $97.3 million, or $0.58 per diluted share, up from $0.04 per share in the same year-ago period. Just as management noted would be the case last quarter, this included $12.6 million from the reinstated blenders tax credit, which was passed retroactively for 2017 in February 2018.

In any case, these results compared favorably to investors' expectations for earnings of $0.11 per share on revenue of $881.4 million. 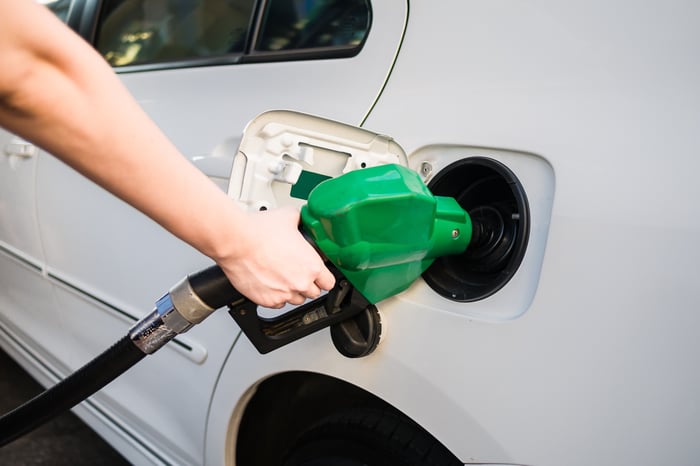 That's not to say Darling is firing on all cylinders. Company chairman and CEO Randall Stuewe noted that while earnings steadily improved at their food and fuel segments, harsh weather in North America led to pricing pressure from excess supply in the feed segment.

Meanwhile, Darling's Diamond Green Diesel (DGD) joint venture with Valero delivered 33.4 million gallons of sales, with adjusted EBITDA of $1.28 per gallon during the quarter. DGD is also now debt free after making a $53.7 million debt payment during the quarter.

Darling also touted made "substantial progress" on the cost analysis for DGD's Phase III expansion to 600 million gallons per year, with the plans expected to be finalized later this summer.

In addition, Stuewe noted that Darling significantly improved its liquidity and capital structure through a private offering of 515 million Euros (or roughly $614.2 million) of unsecured senior notes due 2026 at 3.625%, while simultaneously conducting a cash tender offer of all the company's outstanding 4.75% senior notes due 2022.

"This gives us financial flexibility by extending maturity and improving our cost of borrowing," Stuewe explained. "[...] We will continue to focus on maintaining the strength of our balance sheet as we capitalize on our world of growth opportunities, and we're off to a good start in 2018."