Please ensure Javascript is enabled for purposes of website accessibility
Log In Help Join The Motley Fool
Free Article Join Over 1 Million Premium Members And Get More In-Depth Stock Guidance and Research
By Rich Duprey - May 12, 2018 at 8:06PM

The Dunkin' Donuts chain is changing.

If nothing else, Dunkin' Brands (DNKN) investors should give CEO Nigel Travis credit for ever being the optimist. Despite lower same-store sales in the first quarter indicating that a streamlined menu offering fewer types of doughnuts didn't help, Travis remains confident things will pick up as the year progresses.

"I know I have been accused of being overconfident in the past," he told analysts on the earnings conference call, "but I feel really good about the year on comps and the foundation" that's being built at Dunkin's U.S. operations.

Such starry-eyed confidence when same-store sales are falling may not be enough to comfort investors, though. 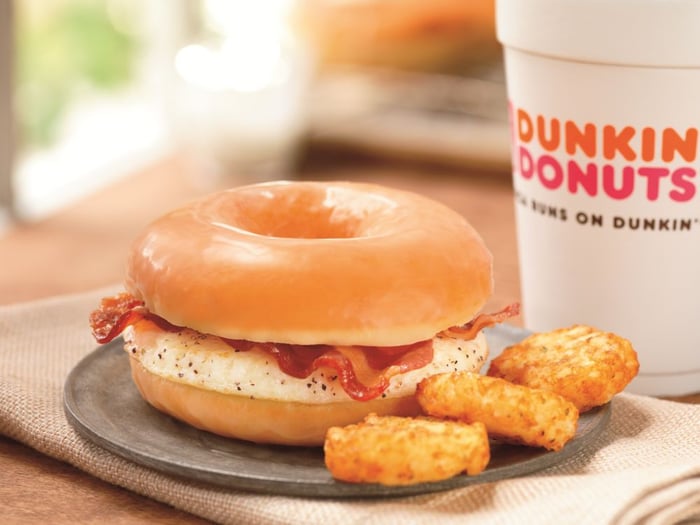 The most important meal of the day

Same-store sales fell 0.5% at Dunkin' and 1% at the Baskin-Robbins ice cream chain in the first quarter. Had it not been for favorable tax rates and a $650 million accelerated share repurchase program, profits would have been worse, but Dunkin' Brands was able to report both GAAP and adjusted earnings higher than what Wall Street was expecting.

Not only is Dunkin' going up against the usual suspects like McDonald's, which recently started a "2 for $4" breakfast promotion, and Yum! Brands' Taco Bell chain, which brought back its Naked Egg Taco breakfast while launching a French Toast Chalupa, other chains are also looking to tap into the a.m. crowd for sustenance. Chipotle Mexican Grill, for example, has begun offering a breakfast menu.

Mornings remain Dunkin's best-performing part of its day. Although it had to fight to reclaim that segment last year by focusing more on beverages -- which was part of the reason it tested dropping the word "donut" from its branding -- it was its drinks menu that also helped its afternoon business pick up.

The crowd that visits Dunkin' in the afternoon is different from the one that comes in in the morning. To its credit, Dunkin' says it's not going to "out-comfy couch" its coffeehouse competition, but rather focus on those customers looking for a quick break, not those wanting to lounge around. The company said it saw success with its Girl Scout cookie-inspired coffee flavors, espresso and iced coffee. But overall, Dunkin' Donuts saw a decline in traffic that offset an increase in the average amount customers spent.

Of course, Dunkin' isn't alone in that respect as McDonald's also reported fewer guest visits, but the doughnut shop is undergoing a fairly large reimagining of what its business should be, and that could be a concern. As Dunkin' rebrands, its customers might not know what to make of it, which is why Travis' confidence in better results for the back end of the year seems misplaced.

Right now, there's no real basis for expecting comparable sales to run 150 basis points to 200 basis points higher as its guidance suggests, primarily because it's predicated on menu simplification catching on, cutting back on loyalty program offers, which could cause member dissatisfaction, and competition easing up on pushing value menu promotions.

Certainly a less complex menu should make ordering easier and quicker, but that's only a net positive if the items that were eliminated weren't customer favorites. Being an optimist can be a plus, but wearing rose-colored glasses in the face of declining results may make for hard comparisons in future quarters.