The release of Oculus Go and the revelation that another headset prototype is in the works show how serious the social media giant is about VR.

Since its $3 billion purchase of Oculus four years ago, Facebook (META 0.61%) has been pouring more resources into its effort to get virtual reality to go mainstream. Clearly, those efforts haven't paid off quite yet, but at its F8 conference last week, Facebook showed that it's committed as ever to VR.

The company's much-anticipated Oculus Go headset officially launched and Facebook also gave attendees a sneak-peek at a prototype that it's working on. Let's take a closer look at the company's new hardware, why Facebook is pushing ahead full steam in this space, and a few roadblocks it might face along the way. 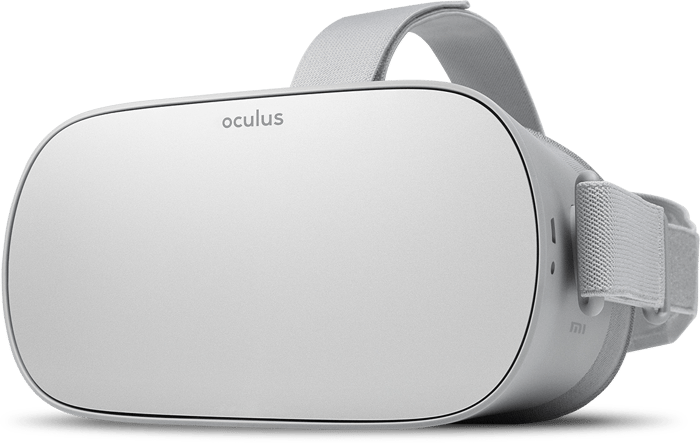 The current star of Facebook's VR strategy is undeniably its new $199 Oculus Go. Unlike other Oculus headsets before it, it doesn't require the assistance of a smartphone, a high-end PC, or any other pricey hardware: It's completely untethered from other devices. This means the Go lacks some of the high-end features the more expensive Rift headset has (for example, the Go can't track motion, other than head movement), but it does offer big features for a relatively small price tag and works right out of the box.

It has speakers built right into the headset strap, a dedicated display, and comes with its own controller. Go even has a spacer that allows eyeglass-wearers to comfortably use it -- or, you can order a pair of prescription lenses that fit right into the device (for an additional fee, of course). The standard version comes with 32GB of memory, or you can opt for the 64GB version for $250.

While all of this is impressive considering Go's relatively low price, Facebook isn't stopping there. At its conference, the company talked about another VR headset it's working on, codenamed Half Dome.

This new device, which doesn't have an estimated release date yet, will have a wider field of view than other headsets (140 degrees vs. 100 degrees). It will use cutting-edge, variable-focus lenses that physically shift to bring images in and out of focus. The technology works by sensing when a user is bringing an object closer to their virtual face, such as a note they want to read in a game, and adjusts the screen to make the object clearer as it gets closer, similar to how we look at objects in real life.

With Go and Half Dome, the company is confirming what CEO Mark Zuckerberg said about virtual reality on Facebook's earnings call last month:

So we're investing a lot in this because, frankly, we haven't to date been a hardware company or an operating system company. And we think that we need to build up a lot of different muscles in order to be competitive and be able to succeed in that space and to be able to shape that space.

Facebook's VR hardware is clearly moving in the right direction, but investors need to remember that this market is anything but proven.

It won't be easy, but Facebook believes VR is worth it

Facebook faces two key hurdles, and the first is exactly the one Zuckerberg described: Hardware and operating systems aren't exactly in the company's wheelhouse. That doesn't mean its VR headsets will fail, but it does mean we shouldn't be surprised if the company stumbles in their development.

The second relates to a point I wrote about last year: Right now, the company with the biggest advantage in virtual reality is Sony, which can easily sell its PlayStation VR headset to people who are already own PlayStation consoles. Lacking that kind of ready-made gaming ecosystem, Facebook will have to convince consumers to buy a standalone headset that's not compatible with existing games on a popular console.

But Facebook is committed to virtual reality, and Zuckerberg still says he views VR as a potential candidate for the next major computing platform:

So on virtual reality here, I think the big picture is that every 10 to 15 years or so, there's a major new computing paradigm, right... So it strikes me as inevitable that, that progression will continue. And these -- each one gets to be more natural to interact with, more natural gestures for controlling, more immersive, more portable. So I think it strikes me as very likely that the next one is going to be around virtual and augmented reality.

He's certainly not the only one who sees tech moving in that direction: Zuckerberg may also be motivated by forecasts that the VR market will have a value of $19 billion by 2021, up from just $2.2 billion last year.

Investors will still have to wait a little while longer to see how all of this plays out for Facebook, but I think we're closer than ever to seeing if VR can truly go mainstream. With its mix of features and its relatively inexpensive price tag, the Oculus Go might be just the device to jump-start consumer interest. Just don't expect it to add meaningfully to Facebook's top or bottom lines any time soon.