Virtual reality (VR) and augmented reality (AR) have the potential to emerge as revolutionary new computing platforms and change the way we see the world. Admittedly, these technologies have yet to break into the mainstream, but their widespread adoption appears to be on the horizon.

With that in mind, the question becomes which companies will best enable investors to profit from these exciting new tech categories? Read on to see why Facebook (NASDAQ:FB), Activision Blizzard (NASDAQ:ATVI), and Alphabet (NASDAQ:GOOG) (NASDAQ:GOOGL) are among the top mixed-reality stocks to buy today.

Facebook has been an aggressive first mover in the VR space, and stands to be a big winner if the technology takes off. Perhaps no other large tech company has made a bigger bet on the new display technology. It acquired virtual-reality company Oculus for roughly $3 billion in 2014 and has remained steadfast in its vision to develop mixed reality tech even though its initial foray into the hardware space was somewhat rocky.

The first Oculus Rift headset launched at $599, a price that proved too high for mass-market appeal, but Mark Zuckerberg and Co. are taking the long view on VR and AR, and readying their next stab at the hardware space. Unlike the Rift, the upcoming Oculus Go won't need to connect to a phone or computer, and will debut at $199. The device, set to launch in 2019, is another clear indicator that Facebook is committed to the long-term future of VR.

Hardware aside, the real promise of VR for the social network company is in software. The current installed base for virtual-reality hardware is small, but more than 2.1 billion people use Facebook's services. That's  a huge addressable market for mixed reality content that's just waiting to be tapped into.

Put simply, there's an excellent chance that any person who buys a VR headset is already a member of a Facebook platform, and is likely to use their new hardware to interface with the company's services. To see a small slice of what the social media giant is working on in the mixed reality space, check out this video from the company's most recent F8 conference demoing features including 360-degree photos and virtual computers.

In the video above, Facebook's Mike Booth says that the company isn't sure yet what the killer app for VR will be -- it sees its role as a platform provider. That's a role that's likely to come with huge benefits, opening up new data and advertising opportunities, and keeping its social platforms central to users' lives.

Like Facebook, Activision Blizzard is not a pure-play in virtual reality, but it's a stock that could see significant upside thanks to the rise of a new kind of content. VR is a new medium that overlaps with existing ones, but, much like video games, it hinges on interactivity and immersion. Those are areas where Activision Blizzard has a lot of expertise.

Video games are already one of the biggest draws to virtual reality, and they'll play a core role in bridging the technology to mainstream adoption. Uses for VR and AR will extend into fields including manufacturing and healthcare, but it's likely that gaming will always be a big part of the consumer appeal for mixed-reality platforms.

Outside of a Call of Duty experience for Sony's PlayStation VR platform that was released in 2016, Activision Blizzard hasn't shown much of what it's developing for VR. That doesn't mean that the company doesn't have some big things in the works, and it's a safe bet that the gaming leader will be one of the biggest and most influential players in the space once hardware platforms have a greater adoption rate.

Activision Blizzard has a range of franchises that could make the transition to VR, as well as some of the most accomplished development teams in the industry. No game company in the last decade has a better track record of building virtual worlds and creating competitive experiences that keep players coming back for more. The publisher is also better positioned than any competitor to deliver mixed-reality gaming experiences across console, PC, and mobile platforms.

In addition to changing the way games are played, VR stands a good chance of complementing Activision's push into esports. At present, most esports content is viewed from fixed camera angles. VR presents an opportunity to immerse viewers in the perspectives seen by the competitors, and even the possibility of having spectators navigate the playing fields of ongoing matches to experience events from vantage points of their own choosing.

Thus far, Alphabet has made forays into the budget-priced end of the VR hardware space with its Cardboard and Daydream headsets. It was also a first mover in augmented reality with its Google Glass smart glasses, though the company seems to have set that platform on the back burner after its lackluster reception. Building an early presence in mixed-reality hardware should help the company move toward the real long-term prizes in the space -- setting up leading platforms for app sales and content, and taking advantage of new frontiers in advertising. 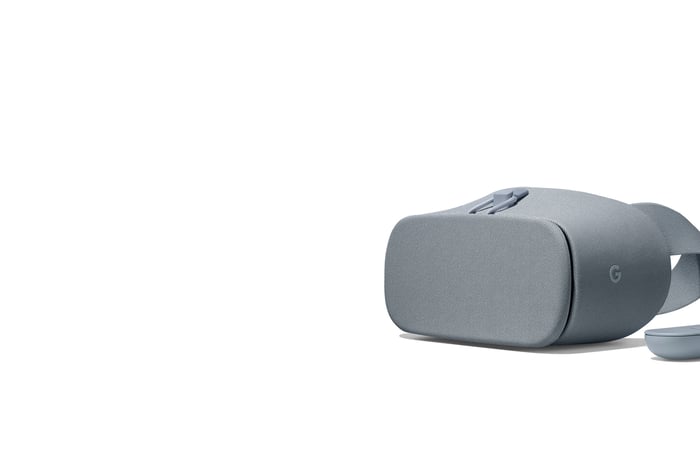 Alphabet has a range of competitive advantages and product synergies that should make it a formidable player in VR and AR. YouTube is a dominant platform for video sharing and livestreaming, and position's Alphabet to become one of the leaders in mixed-reality content portals. The company's Android operating system stands as the world's most-used mobile platform, and will likely play a defining role in the evolution of VR and AR as well.

Mixed-reality platforms will likely open up a wide range of new and valuable user data, and Google's dominance in the search space means that Alphabet is ideally situated to serve up tailored ads. From there, the immersive nature of mixed-reality experiences has the potential to increase user engagement that leads to more effective advertising campaigns -- and higher ad-pricing rates.

If that weren't enough, Alphabet will also be able to generate revenue by claiming a portion the revenues from VR and AR software sold through its app store. This makes the company a good pick-and-shovel play for investing in the growth of the VR games market, as gaming apps currently produce the large majority of app store revenue, and will be a driving force in mixed-reality adoption. With such a strong range of advantages in the space, Alphabet is one of the best-positioned companies to benefit from the widespread adoption of mixed-reality technology.