Please ensure Javascript is enabled for purposes of website accessibility
Log In Help Join The Motley Fool
Free Article Join Over 1 Million Premium Members And Get More In-Depth Stock Guidance and Research
By Rich Duprey - May 13, 2018 at 6:40PM

Its partnership with Google Cloud gives it a tool to leverage growth in digital healthcare.

As Fitbit (FIT) transitions from being a maker of fitness trackers to a developer of smartwatches, efforts toward becoming a leading digital health provider will become more important for the device maker.

The launch of the Versa smartwatch was the most successful product launch in Fitbit's history. So great were sales of the device that smartwatches are expected to become the primary source of revenue for the device maker in the second half of the year.

Yet part of that acceleration comes from the dramatic decline in fitness tracker sales, which it anticipates will plunge 19% in the second quarter. While smartwatch revenues nearly doubled to represent 30% of total sales, it wasn't nearly enough to offset the drop-off in tracker revenue, as total sales still fell 17% to $247.8 million.

The question is whether smartwatches can grow enough to more than make up for the loss of tracker revenue because Fitbit's goals for its digital healthcare initiatives virtually require that to happen. 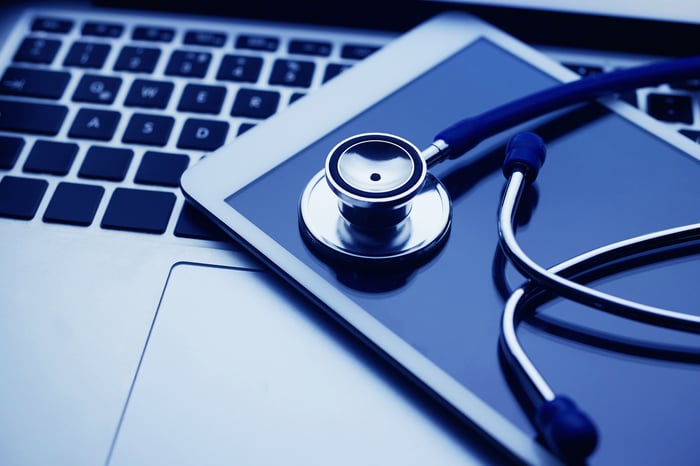 Fitbit's bid to break into healthcare could give it recurring revenue streams. Image source: Getty Images.

Taking the pulse of healthcare

Earlier this year, Fitbit acquired Twine Health, a small, HIPAA-compliant healthcare coaching start-up that provides health-related coaching for employees in corporate wellness programs. It connects them to coaches and doctors who craft plans to assist in establishing healthier lifestyles.

Managing the health of patients while they're away from a clinic or hospital has proved challenging for providers, as patients can develop more serious health issues if they fail to manage existing conditions like diabetes or hypertension. The Twine acquisition envisions a time when a hospital or clinic could run its software platform or integrate its technology with other vendors in the industry.

And to do that, Fitbit just announced an important partnership with Alphabet's (GOOG 2.68%) (GOOGL 2.63%) Google Cloud Healthcare API. It's also HIPAA-compliant and gives the device maker a place where it can store data to connect with the electronic medical records systems used by health providers -- and do so at scale.

Google is planning for when doctors and clinicians can instantaneously and securely collaborate on your healthcare issues. Its Cloud Healthcare API attempts to do that by providing the infrastructure that will leverage artificial intelligence and machine learning to hopefully improve patient outcomes.

By partnering with Google, Fitbit legitimizes its healthcare ambitions and lets it scale up quickly while integrating the system with its smartwatches. Fitbit is also moving over to Google's cloud platform, which it says will provide it with both cloud services and engineering resources that will free up capacity that it will be able to redeploy to healthcare.

A platform to fight from

Left unsaid was that it will also be better able to compete against Apple (AAPL 2.62%), which itself has announced an increased focus on healthcare. While there were rumors that the latest iteration of the Apple Watch would be poor, Apple recorded its best quarter ever and said its wearables segment saw revenue surge by nearly 50% from last year.

In contrast, Fitbit's sales are struggling, though Fitbit reiterated its belief that total revenues will come in at around $1.5 billion, which would be a 7% decline from 2017. That suggests they anticipate that falling tracker demand will eventually level off while smartwatch sales will continue to grow.

Coupled with its Twine acquisition, the partnership with Google, and its women's healthcare initiative, Fitbit is setting itself up to be a relevant player in the market that will generate recurring streams of revenue beyond device sales. While there remain questions about whether healthcare providers will take up Fitbit's software, and just how much consumers will trust their most personal information to the cloud -- regardless of assurances of security -- this is where the company begins to be a legitimate component of the healthcare system.