Please ensure Javascript is enabled for purposes of website accessibility
Log In Help Join The Motley Fool
Free Article Join Over 1 Million Premium Members And Get More In-Depth Stock Guidance and Research
By Ashraf Eassa - Updated May 15, 2018 at 2:05PM

Another quarter, another surge in Apple's R&D spending.

As a tech investor, one of the metrics I pay close attention to for any company that I consider for my portfolio is research and development (R&D) spending. Technology companies live and die by their ability to bring compelling, innovative products to the marketplace, and a company's R&D spending is a pretty solid indicator of how aggressively a company is investing in its future.

For years, Apple (AAPL 2.45%) -- arguably one of the most innovative technology companies to ever exist -- has been dramatically increasing its research and development as its business has grown. 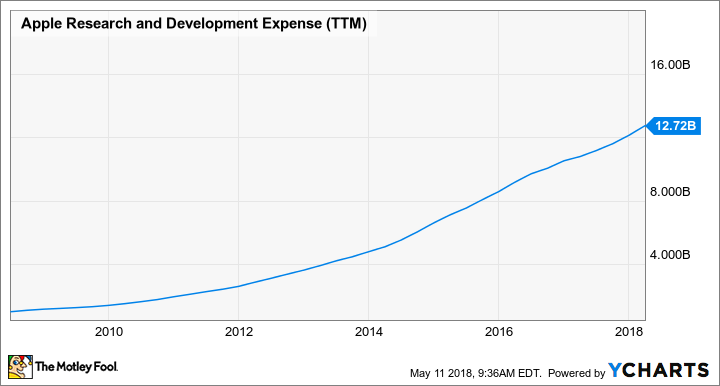 Apple's R&D spending continued its rapid growth last quarter, during which it spent a whopping $3.38 billion -- up almost 22% from the $2.78 billion that it spent in the same quarter last year. That spending increase, Apple says, was "driven primarily by increases in headcount-related expenses and material costs to support expanded R&D activities."

Although Apple is a highly secretive company that does its best not to tip its hand on what it's working on, it's not too hard to guess what some of those spending increases will be aimed at. Here are three areas I believe Apple is doubling down in, which is driving this increased research and development spending.

Let's face it -- Apple is widely believed to be behind in terms of artificial intelligence, one of the hottest trends in the technology world today. Apple's digital assistant, Siri, is significantly behind the competition, which not only reduces the value proposition of its core products (e.g. iPhone), but it also makes it difficult for the company to enter new product categories in which artificial intelligence is increasingly important.

For example, Apple's HomePod wireless speaker received mixed reviews not because the speaker itself didn't produce good sound (it arguably delivered best-in-class sound), but because compared to the digital assistants that power competing devices, Siri is really dumb. Sales of the device also appear to be underwhelming.

Apple has been designing its own chips since it bought processor start-up P.A. Semiconductor all the way back in 2008. Apple is now one of the world's top chip designers, building best-in-class system-on-a-chip technology for its iPhone, iPad, Apple Watch, and other product categories. The company is even rumored to be planning to build custom processors for its Mac line of personal computers.

For Apple to simply build newer, better versions of the chips that it makes today, it would naturally see an inflation in its R&D expenses -- engineers tend to see salary raises each year and chip technology becomes increasingly complex, requiring more people and more sophisticated development tools and technologies to support those efforts.

Since Apple is undoubtedly working on a slate of new product categories, you can bet that its chip teams are growing to support the chips that'll power those new products.

If Apple can bring the entire display technology development process in-house as Bloomberg says Apple is trying to do, then Apple could either build its own display manufacturing plants or it could bring its display manufacturing know-how to the contract manufacturers of its choosing, cutting its dependence on third-parties (such as Samsung, Apple's biggest rival in the smartphone market) for key technology development. This means greater supplier choice as well as the ability to differentiate its displays more aggressively from what the competition can build -- a double-win for Apple.