Please ensure Javascript is enabled for purposes of website accessibility
Log In Help Join The Motley Fool
Free Article Join Over 1 Million Premium Members And Get More In-Depth Stock Guidance and Research
By Ashraf Eassa - May 14, 2018 at 9:00AM

Which large-cap chip company is a better investment today?

Taiwan Semiconductor Manufacturing Company (TSM -2.04%) and Qualcomm (QCOM -1.60%) are two of the largest publicly traded chip companies in the market. TSMC, the larger of the two with a market capitalization of nearly $200 billion, serves as a contract manufacturer for a wide range of customers -- including Qualcomm.

Qualcomm, the smaller of the two, is both a chip designer as well as the owner of a large set of wireless patents that it licenses out and has, historically, profited handsomely from. 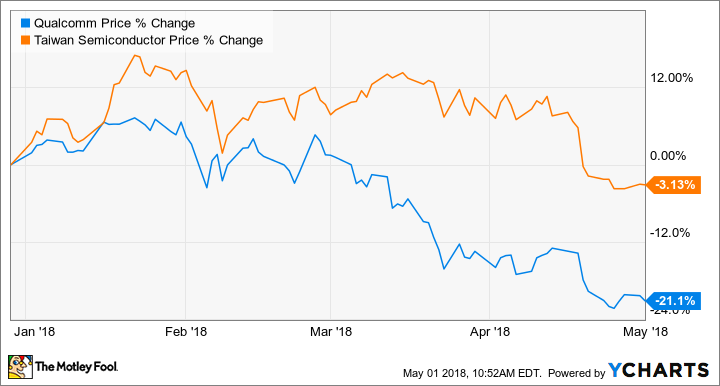 Year-to-date, shares of both TSMC and Qualcomm are down, though Qualcomm's 21.1% decline handily outpaces TSMC's. Given the downturns in each, investors might be wondering which of the two stocks is the better buy today. Let's compare them.

TSMC's advantage is that it's a contract chip manufacturer, and the world's largest and most successful one at that. This means that many companies looking to compete for the same growth opportunities (e.g. high performance computing, graphics processors, Internet of Things) will likely ask TSMC to build their chips and TSMC doesn't have to care which ones are successful as long as the successful ones are TSMC customers.

Qualcomm, on the other hand, designs its own chips and is responsible for selling them to customers. If Qualcomm is successful, then it potentially stands to profit more from any one segment than TSMC does because it'll get paid more for its chips than TSMC would as a contract manufacturer. If Qualcomm isn't successful, though, then it's just burned a lot of research and development and marketing efforts for a disappointing return.

Moreover, while both TSMC and Qualcomm are going after increasingly diverse markets, TSMC has the edge here as it can go after many more markets than Qualcomm could hope to by virtue of its business model of building chips for everyone.

If you're looking for the more diversified/less risky chip manufacturer, I'd say that the winner here is TSMC. 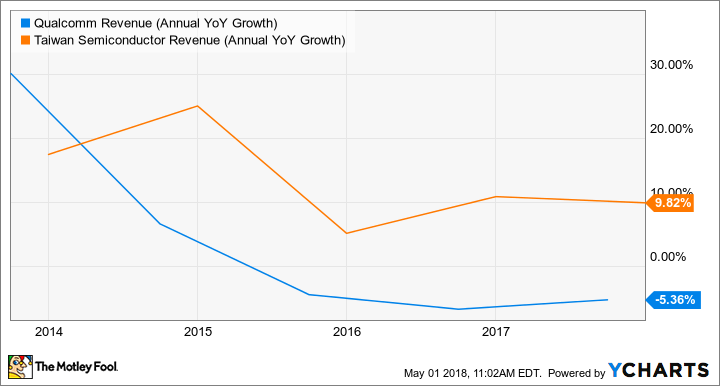 TSMC's financial performance has, for the most part, outperformed the broader chip industry thanks to market share gains, while Qualcomm's business has struggled mightily.

But, since Qualcomm operates in both the chip business and the wireless technology licensing business, TSMC has delivered superior revenue growth.

In terms of profitability, it's not even close. TSMC's operating income over the last 12 months has come out to nearly three times Qualcomm's: 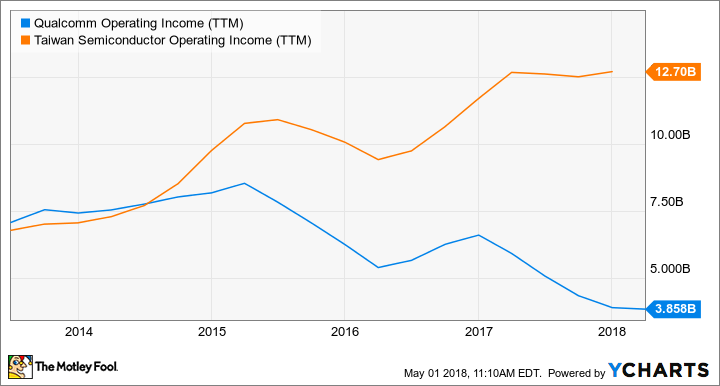 In terms of pure chip profitability, TSMC wins hands down, something that's becoming plainer as Qualcomm's highly lucrative licensing business comes under pressure. So, if we're looking at profitability today and in the near-future (since it's unclear when Qualcomm's wireless technology licensing business will get back on track -- if it ever does), then TSMC is the clear winner.

While it's obvious that TSMC is, today, the much more profitable company with better growth rates, I think that for investors willing to gamble a little, Qualcomm stock could have significantly better upside.

Things are, for the most part, going right for TSMC; its future business and stock price performance depends on it continuing to execute as it has in terms of technology development and customer acquisition as well as on the underlying growth of the markets that it participates in.

TSMC's story is pleasantly straightforward and as long as it doesn't really mess up or the overall chip market doesn't implode, the trend should be up for TSMC.

More importantly, a successful outcome for Qualcomm would cement, once and for all, the viability of Qualcomm's highly lucrative licensing business. Not only would Qualcomm's profitability surge, but investors may be willing to pay an even richer multiple for the stock now than they were previously because of the peace of mind that they'd now feel.

On the flip side, if Qualcomm's licensing business is as some fear, destroyed, and Qualcomm winds up entitled to a mere fraction of what it had once been entitled to from Apple and other smartphone makers, then that'd probably mean even lower profitability for Qualcomm and, yes, an even lower stock price from here.