Please ensure Javascript is enabled for purposes of website accessibility
Log In Help Join The Motley Fool
Free Article Join Over 1 Million Premium Members And Get More In-Depth Stock Guidance and Research
By Rich Smith - Updated May 14, 2018 at 11:15AM

Shares of Magna International (MGA -5.26%) enjoyed a modest 4% boost after reporting earnings last week, after the company handily bested Wall Street estimates. This morning, two Street analysts are predicting there could be a whole lot more good news in store for investors in the auto parts manufacturer, as Magna transforms itself into a key player in new automotive technologies. 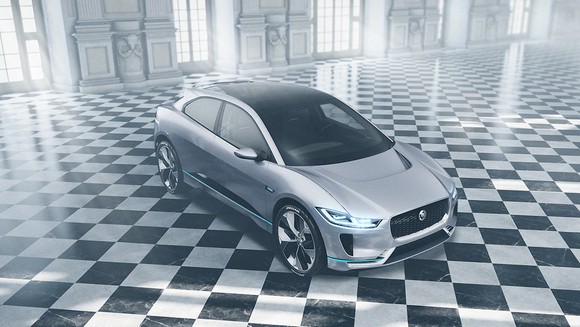 Part of the case for buying Magna International stock: An electric car that Magna is building for Jaguar. Image source: Jaguar USA.

BMO Capital sounded the first bullish note on the Canadian auto parts star, announcing this morning that it's upgrading Magna International stock to outperform and assigning a $75 price target.

BMO told StreetInsider.com (subscription required) that "recent strategic developments are highlighting Magna's capabilities and the company's momentum in becoming a meaningful player in new technology growth areas" in cars. Currently, only 12 of the 21 analysts who follow Magna stock rate the stock a buy (or equivalent rating). But BMO believes that "there will be a gradual re-rating of the company's stock," with some or all of the remaining analysts being converted to fans of Magna International as they grow more enthusiastic over such "strategic developments" as Magna's partnership with Lyft, its supply agreement with China's BAIC Group, and its growing role in "new technology growth areas" like driverless cars.

In that latter regard, fellow Fool.com contributor John Rosevear reports that Magna "has developed a new technology platform that will allow automakers to build self-driving capabilities into their vehicles," and predicts that "automakers will give its system a serious look."

No sooner had BMO published its upgrade than out came Evercore ISI with an upgrade of its own.

Like BMO, Evercore believes that Magna has a role to play in "Auto 2.0," and believes investors are discounting the possibility of Magna becoming a major player in the electrification/roboticization of cars and trucks, creating the potential for a "call option" on the stock (i.e., you can buy the stock for a fraction of what the Auto 2.0 parts of the business will be worth if they succeed). Additionally, Evercore argues that Magna is selling for a discount to intrinsic value even without Auto 2.0 succeeding, given the company's accelerating growth in fiscal 2019.

Evercore's conclusion: Magna could be worth as much as $80 a share, and has limited downside at its current share price of $63 and change.

What is this growth that Evercore speaks of, and is it enough to justify the stock's price? To find out, let's travel back in time a few days, and review what Magna told us in its Q1 earnings report last week.

Magna International reported Thursday that Q1 sales of $10.8 billion surged 21% year over year, while earnings per share also jumped 21%, to $1.83. Cash from operations increased an even more impressive 26%.

Free cash flow ($334 million) wasn't quite as strong as reported net income ($660 million), but still grew nearly 150% in comparison to last year's FCF number. As a result, Magna's free cash flow for the past 12 months ($1.7 billion) is once again closing the gap with GAAP net income ($2.3 billion).

Magna International stock sells for 13.1 times free cash flow, or 9.7 times GAAP net income. Currently, analysts who follow Magna are in general agreement that it should grow earnings at about 17% annually over the next five years, which makes Magna stock look pretty cheap whether valued on either free cash flow or earnings. (The company does, however, carry about $2.8 billion in net debt, so you may want to adjust those valuations upwards a bit when calculating multiples to enterprise value.)

Another caveat you might want to bear in mind: Magna raised guidance in its earnings report last week, and now predicts it will generate sales of between $40.9 billion and $43.1 billion this year -- $42 billion at the midpoint, which would represent year-over-year growth of 8%. Earnings on those sales are expected to range from $2.4 billion to $2.6 billion, so $2.5 billion at the midpoint, good for 14% growth year over year.

That's a nice growth rate, even if not quite the 17% rate that Wall Street is calling for. Also, BMO and Evercore seem to think that much of Magna's growth won't appear until next year, as the Auto 2.0 phenomenon matures. And in the meantime, even 14% growth is pretty good -- probably good enough to justify a 10 times earnings multiple on the stock.

Between Magna's attractive valuation and its above-market 2.1% dividend yield, I'm inclined to agree with the analysts on this one: Magna International stock looks cheap enough to buy.