Healthcare products tend to remain in demand no matter what is going on in the global economy. That's why the sector is a great place to hunt for high-quality investments.

So which stocks do our healthcare experts have their eye on right now? We asked these three Motley Fool investors to weigh in, and they picked AbbVie (NYSE:ABBV), Cardinal Health (NYSE:CAH), and Masimo (NASDAQ:MASI). 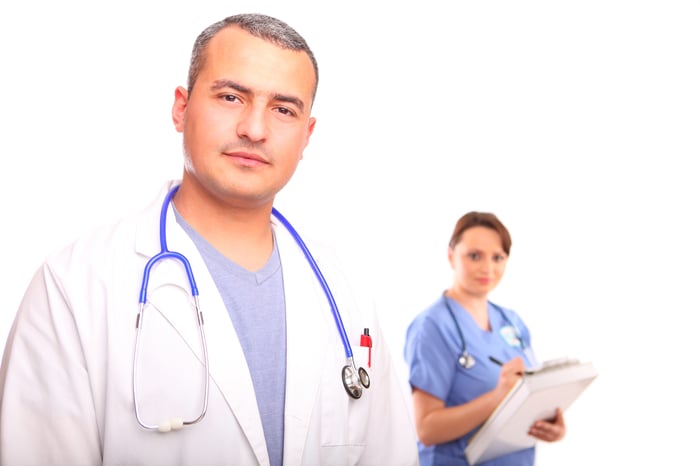 A big pharma stock that has it all

Keith Speights (AbbVie): AbbVie was rocking along, with the stock soaring more than 50% in 2017 and up over 20% year to date in 2018. But the good times came to a screeching halt in late March when the company announced disappointing results for experimental lung cancer drug Rova-T. AbbVie lost all its gains made so far this year and then some.

But AbbVie continues to be the best big-pharma stock on the market, in my opinion. While the Rova-T setback certainly stung, the company still has a pipeline loaded with potential winners, including endometriosis and uterine fibroid drug elagolix, and autoimmune disease drugs risankizumab and upadacitinib.

AbbVie's Q1 results reminded investors just how much the company has going for it even without its strong pipeline candidates. The company blew past Wall Street estimates on soaring sales for immunology drug Humira, cancer drug Imbruvica, and a surprisingly strong launch for new hepatitis-C drug Mavyret.

Investors looking for growth should still like AbbVie despite its Rova-T challenges. Income-seeking investors have just as much to like. AbbVie's dividend yield currently stands just a notch below 4%. The company has increased its dividend payout by a whopping 140% since it was spun off from parent Abbott Labs (NYSE:ABT) in 2013.

Thanks to the sell-off following the Rova-T update in March, AbbVie stock now trades at 11.4 times expected earnings. With its great growth prospects, that's a bargain price. AbbVie is a big-pharma stock that has it all: growth, income, and a great value.

Betting on a long-term rebound

Sean Williams (Cardinal Health): Sometimes I find that the most intriguing stocks are those being avoided like the plague by Wall Street. If you're looking for a solid turnaround candidate and income play in the healthcare sector, I'd suggest taking a closer look at the beaten-down Cardinal Health.

There's no sugarcoating that Cardinal Health -- which supplies medical devices, generic drugs, and other supply-chain needs for hospitals, medical offices, and ambulatory surgical centers -- bombed in its recently reported third-quarter results. Shares of the company had their worst day in 14 years (a 19% decline) after Cardinal Health announced that a higher effective tax rate, along with weaker generic drug pricing, caused its profit to miss the mark -- a 33% decline in adjusted earnings per share (EPS) from the prior-year quarter to $0.81. Cardinal Health's full-year adjusted EPS guidance was also reduced to a new range of $4.85 to $4.95, down from $5.25 to $5.50.

That probably sounds bad on the surface, but the issues impacting Cardinal Health are generally cosmetic and should be resolved within the next 12 to 18 months, in my opinion.

The first issue -- the higher-than-expected tax rate -- was derived from inventory write-offs at medical device producer Cordis, which Cardinal Health acquired from Johnson & Johnson (NYSE:JNJ) three years ago. Here's the thing about Cordis: It's growing. Top-line sales of the cardiovascular device maker have steadily pushed higher as the division has given Cardinal Health a broader geographic presence. The issue lies in working out the kinks in Cordis' supply chain. Though this won't happen overnight, management has implemented measures that should yield positive results in 2019.

As for weaker generic-drug pricing, this isn't anything new. Generic drugmakers like Teva Pharmaceutical Industries (NYSE:TEVA) have been pressured by weaker generic drug prices since the third quarter of last year. However, weakness in pricing has recently shown signs of stabilizing. Generic drug manufacturers and Wall Street analysts both seem to believe that 2019 will offer much-needed price stabilization for generic therapies. Considering that generics make up the bulk of total written prescription -- about nine out of 10 -- it seems only logical that pricing power will return to generic drugmakers and distributors sooner rather than later.

What we're left with is a healthcare company valued at less than 10 times Wall Street's 2019 EPS consensus that also happened to increase its quarterly dividend by 3% this past week.  For you income seekers at home, this value stock is now yielding 3.6%! Though it could take some time to find its legs again, Cardinal Health looks to be an intriguing turnaround play for value- and income-oriented investors.

Brian Feroldi (Masimo): Medical device stocks might not grab as many headlines as biotechnology stocks, but they sure can make wonderful long-term investments.

Consider Masimo, a medical device company that sells noninvasive devices that monitor oxygen levels in the blood. This company has been steadily winning market share for years, which has helped drive consistent gains on its top and bottom lines. The stock has followed suit, and investors who bought in during the company's IPO in 2007 are sitting on total gains of more than 370%.

The company's most recent quarter proved yet again that its competitive position is as strong as ever. Revenue grew more than 8% to $213 million thanks to healthy reorders from existing customers and new business wins. Adjusted EPS grew 15% thanks to margin improvements and stock buybacks. Wall Street expects that the prosperity can continue for years as current estimates call for double-digit gains on the bottom line over the next five years.

The only knock against investing in Masimo that I see is that the stock isn't particularly cheap right now. Shares trade for more than 32 times forward earnings, which is certainly pricing in a lot of prosperity. However, Masimo boasts a debt-free balance sheet, is run by its founder, is highly profitable, and has a strong history of outperforming expectations. Those are highly attractive qualities that make me believe this is a company that deserves its premium price tag.