Please ensure Javascript is enabled for purposes of website accessibility
Log In Help Join The Motley Fool
Free Article Join Over 1 Million Premium Members And Get More In-Depth Stock Guidance and Research
By Billy Duberstein - May 15, 2018 at 12:45PM

Earnings were a mixed bag, but Starbucks' future remains bright.

Recently, Starbucks (SBUX 0.06%) had its second fiscal quarter earnings report, with a muted reaction from the market. Sales increased 14%, but that figure was boosted an extra 5% from the consolidation of the East China business, along with foreign currency tailwinds.  While earnings per share grew only 4.4%, that number was negatively impacted by restructuring costs associated with closing Teavana stores, as well as impairments in Switzerland; however, stripping those factors out, EPS was up a strong 17.8% on a non-GAAP basis.

Starbucks is now a sprawling global colossus with 28,209 stores across 76 markets, so attempting to assess the overall state of the business requires parsing several puts and takes. Let's look past the headline numbers and focus on what you need to know. 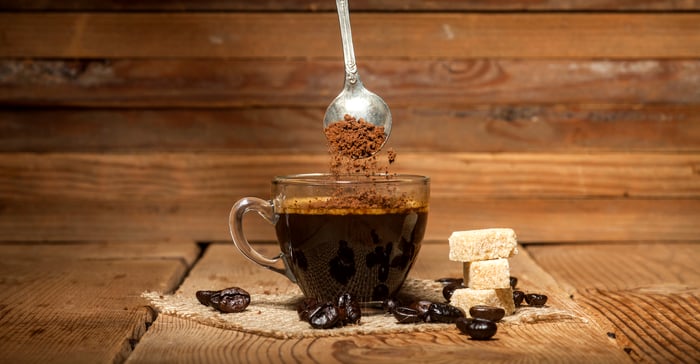 How much can Starbucks grow? Image source: Getty Images.

The primary metric most retail analysts look to first is same-store sales, which shows how existing stores fared relative to last year. Companies with growing comps are generally thought of as healthy, while negative or flat comps are usually big red flags. On that front, Starbucks' results were relatively solid, though not terrific:

The quarter's 2% growth was below Starbucks' 3%-5% target for 2018, and negative transaction growth is certainly worth monitoring. Still,  management did reiterate its 3%-5% guidance, though it now expects comps to be at the low end of that range. Management also noted that trends improved in the U.S. throughout the quarter, from 1% in January to 3% to February and March.

Sandwiches to weigh on profits?

One negative trend to monitor is margins, as non-GAAP operating margin fell companywide from 17.9% to 16.2%. If the company can only grow at the expense of profits, it also wouldn't be a good sign; however margins were due primarily to two factors -- increased employee compensation, and the growing importance of food, which is lower-margin, but grew to 22% of sales (up 100 basis points).

While these are short-term negatives, Starbucks has always balanced profits with taking care of its employee stakeholders, and the recent tax cut allowed the company to reinvest in this all-important asset. Furthermore, food growth contributes overall margin dollars, even if the margin percentage decreases. Management stated that food regularly contributes around one percentage point of comparable sales growth, which is half of the 2% comp growth last quarter. Management also  believes it can also garner extra savings from cutting down on waste (mostly from unsold food) by better managing store inventory to the tune of $170 million this fiscal year.

The most important customer

The My Starbucks Rewards program is extremely important to Starbucks. While MSR members only make up around 20% of the customer base, they account for roughly one-third of overall sales.  This quarter showed continued positive signs in MSR, with membership expanding 12% to nearly 15 million -- that's out of a total 75 million customers -- and average spend per rewards member increased mid-single digits. Clearly, getting people into the rewards program is crucial for Starbucks.

To attract even more into the program, management now plans on opening up MSR features such as Mobile Order-and-Pay to non-MSR members, leveraging Wi-Fi signup in stores, and promoting afternoon Happy Hour to convert more customers. Establishing more digital one-to-one relationships, through which Starbucks can tailor promotions to an individuals' specific tastes (so it doesn't have to be as promotional) is crucial for the company going forward, and results were solid on this front.

Speaking of afternoons, Starbucks is now focusing efforts to boosting this lower-volume daypart. Non-MSR members make up 50% of afternoon sales, a higher percentage than mornings, and the company hopes to convert more to the program with a revamped Happy Hour promotion. Happy Hour used to be an across-the-board discount on Frappuccinos, but that promotion has stagnated recently.

Starbucks has begun widening the afternoon single-use coupon to a wider array of beverages based on individual buying patterns. Afternoons will also focus on cold drinks, which continue to grow -- in fact, even during the past winter months, cold beverages made up 40% of Starbucks' revenue growth. Cold successes have included Nitro Cold brew, and the recently introduced Cold Foam layer iced drinks.

This renewed afternoon focus is bigger than just one-off promotions. COO Roz Brewer claimed Starbcuks is now telling, "a longer, fuller story" around afternoons, and, "actually going after a customer base that we really haven't touched."

Finally, the most important element to Starbucks growth story is China, so much so that the company is doing its own separate China-focused investor day on May 16. Incredibly, Starbucks' management believes the China opportunity is 1200 times that of the U.S.

How does the company arrive at such a lofty number? Well, China's middle class proejcts to grow to roughly 600 million by 2021, according to forecasts, roughly twice the population of the U.S. However, the amount of coffee consumed per capita in China is just half a cup, compared with 300 cups per capita in the U.S., or 600 times greater. Applying that to twice the population gets you to 1200.

Of course, this is over the long-term, and achieving that kind of growth would mean converting China into more of a coffee culture. Still, strong 4% comps out of China last quarter on a rapidly expanding store base shows Starbucks is well on its way.

Starbucks had an underwhelming first quarter, but strong signs in MSR and China were encouraging. In addition, the company is investing in its people, and experimenting to address problem areas such as afternoons. Long-term investors have no reason to panic: stick with Starbucks