Please ensure Javascript is enabled for purposes of website accessibility
Log In Help Join The Motley Fool
Free Article Join Over 1 Million Premium Members And Get More In-Depth Stock Guidance and Research
By Jason Hall - May 15, 2018 at 6:02AM

After a quarter of weak growth, the company is counting on some big catalysts to spur faster adoption of natural gas vehicles.

Natural gas for transportation supplier Clean Energy Fuels Corp (CLNE 2.01%) reported earnings on May 10, and while the company was profitable on both a GAAP and adjusted basis, growth -- measured in gallons of natural gas delivered -- slowed to almost a trickle, even when adjusted for last year's sale of the biomethane business. At the same time, the cyclical nature of its station construction and expansion business also affected the results, playing a role in a big decline in revenue.

Yet even with these concerns, there were some positives on earnings day that investors should now factor into the thesis for the company, including a big announcement prior to earnings that multinational energy giant Total was taking a 25% stake in the company and would partner with it in an upcoming program to help accelerate adoption of heavy-duty natural gas trucks in the U.S. 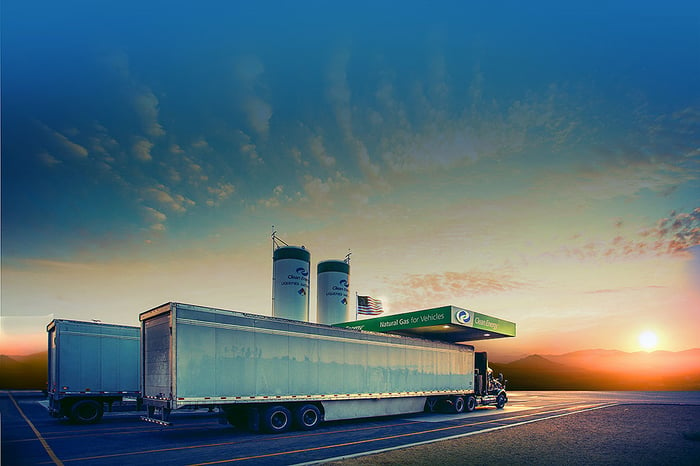 Clean Energy is counting on it being the dawn of heavy-duty natural gas vehicles. Image source: Clean Energy Fuels.

Let's take a closer look at Clean Energy Fuels' quarterly results, as well as what management has to say about the future.

Here are the key metrics from Clean Energy's first quarter:

With the exception of revenue, none of these key metrics improved in the first quarter, and frankly the boost in revenue was due to the renewal of a tax credit retroactive to 2017, not higher sales from any of the company's segments. To the contrary, if we look at a breakdown of sales by segment, Clean Energy's sales results weakened:

Over the past year, Clean Energy has made a number of strategic deals, including selling its renewable natural gas production business to BP and combining its compression equipment manufacturing business into a joint venture with Landi Renzo, that have affected how it recognizes revenue and fuel volume, as well as the decline in natural gas prices over the past year.

Compressor sales: In the fourth quarter, Clean Energy and Landi Renzo combined their compression equipment businesses into a single venture, with Landi Renzo owning 51% and Clean Energy holding 49%. Since it holds a non-controlling stake in the venture, it now holds it as an equity investment on its balance sheet and doesn't report any sales or profits from the investment in its consolidated results.

Station construction: Revenue from this segment can be very cyclical as station projects can take many months to complete and demand isn't always steady from one quarter -- or even year -- to the next. On the earnings call, CFO Bob Vreeland said the decline in station revenue in the quarter was "timing-related" and that the company had a "normal, steady" backlog of activity lined up for 2018.

So how did sales jump by $3.1 million if Clean Energy Fuels reported big declines in two segments and stopped reporting revenue in its third? The company did it by recognizing $25.5 million in non-segment revenue related to the renewal of the Alternative Fuels Excise Tax Credit -- AFTC -- for 2017. This was part of the federal tax law passed late last year that lowered corporate and personal income tax rates, and a one-time gain for the company since the law didn't extend AFTC beyond 2017.

What about margins and volumes?

Management has highlighted two metrics -- fuel volumes delivered and per-gallon margins -- as being important measures of the company's progress. Volumes were flat in the quarter, while per-gallon margins declined year over year. On one hand, margins were expected to decline year over year following the sale of the biofuels business to BP last year, and margins were actually well within the range of $0.24-$0.28 per gallon the company said to expect following the BP sale, which lowered other expenses that don't show up in the gross margin line. Furthermore, per-gallon margin has improved sequentially for two consecutive quarters, so this metric is trending in a healthy direction.

However, the volume measure is slightly more complicated. The company reports a breakdown of three groups: CNG (compressed natural gas); RNG (biomethane sold as non-vehicle fuel); and LNG (liquefied natural gas). Here's how these three groups performed in the quarter:

There are some adjustments for changes in the business that account for part of the weakness. The sale of the biomethane business essentially exited the company from non-vehicular RNG sales. The company also sells some non-vehicular LNG, and a non-recurring bulk LNG delivery last year was part of the reason why LNG volumes declined in the quarter. But it wasn't the only reason; Vreeland said a maintenance service contract for one LNG customer was not renewed. But even adjusting for the sale of the RNG business and non-recurring LNG volumes, the best we can say is that CNG volumes increased over 3%.

Clean Energy's efforts to improve its balance sheet and operating structure continue to pay off. Selling, general, & administrative -- SG&A -- expenses were $18.8 million, down 21% year over year. Depreciation & amortization expenses also fell 16.4%, a product of reduced capital spending in recent years, along with the assets divested as part of both the BP sale and Landi Renzo compression partnership. 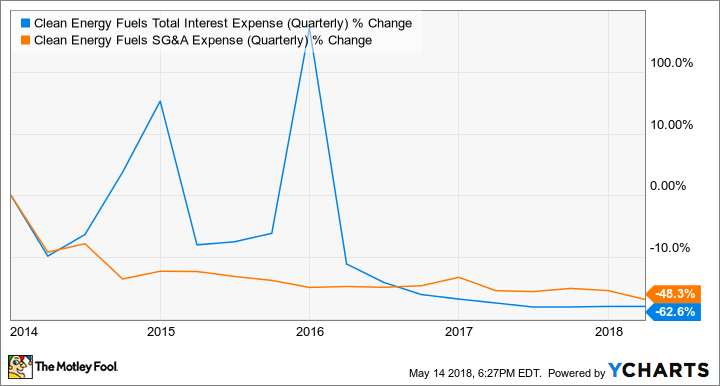 What Clean Energy is counting on to reignite growth

There are multiple catalysts that could spark a return to growth in coming quarters. First is a potentially game-changing heavy-duty natural gas engine from joint venture partners Westport Fuel Systems Inc and Cummins Inc. The ISX 12N near-zero emissions engine is now being delivered to customers, and Westport CFO Ashoka Achuthan said that it's "not unreasonable" to expect linear sales growth for this engine going forward. This is particularly true in California and other states that suffer from high air pollution related to transportation, and that are taking steps to reduce particulate emissions, particularly in high-population areas. In addition to tighter regulations, substantial funding in the form of grants to replace older diesel trucks is expected to lead to a big increase in natural gas heavy-duty trucks operating over the next year.

Clean Energy's partnership with Total is also expected to boost the number of heavy trucks using natural gas. In addition to taking a 25% stake in the company, Total will play a key role in a new leasing program. In short, Clean Energy says it will pay the incremental cost for a natural gas truck over a diesel truck for customers who sign a natural gas refueling agreement that matches the term of the lease, at a guaranteed $0.50 per gallon discount versus diesel.

Lastly, diesel prices are higher than they have been in over three years, up 25% in the past year and up more than 50% since early 2016: 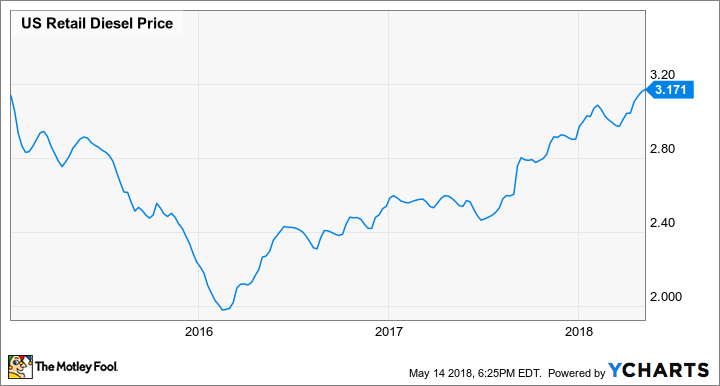 Looking ahead: Falling costs helping, but a return to growth is critical

With $140 million in debt on track to be extinguished and more than $100 million in cash inflows from the AFCT and Total deal, Clean Energy will soon have more cash than debt and should generate positive operating cash flow on a recurring basis. This is a transformative step for the company, though it has come at the cost of substantial dilution in recent years. And it couldn't come at a better time with growth slowing in what is hopefully just a cyclical pause.

Looking ahead, tougher emissions standards, corporate carbon reduction policies, and a big increase in diesel prices should act as catalysts for demand. The good thing is Clean Energy's back is no longer against the wall, and management has time to navigate the market while demand recovers.