After its blockbuster merger with SABMiller, Anheuser-Busch InBev (NYSE:BUD) is the undisputed king of beer. But with the industry's growth slowing, AB InBev is focusing on wringing additional cost savings out of its operations, while also prioritizing the growth of its premium beers. Both efforts are bearing fruit as can be seen in the company's fiscal 2018 first-quarter  results.

Organic revenue growth rose 4.7% -- with revenue per 100 liters rising 4.9% -- driven by price increases and strong sales of Anheuser-Busch InBev's premium brands. Total volumes, however, fell 0.2% as a 0.5% increase in AB InBev's own beer volumes and a 26.5% jump in third-party products were more than offset by a 6.9% decline in non-beer volumes.

Revenue for AB InBev's three global brands -- Budweiser, Stella Artois, and Corona -- grew by 7.9% globally. Corona revenue surged 25%, including a 40% spike outside of Mexico. Stella Artois revenue jumped 12%, fueled by strong growth in the U.K. and Argentina. Budweiser revenue, though, fell 1.3%, as 2.5% growth outside the U.S. wasn't enough to offset weakness domestically. 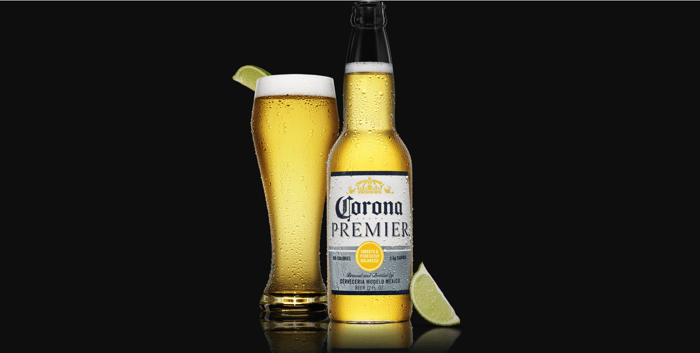 All told, normalized EBITDA -- which excludes non-recurring items and discontinued operations -- rose 6.6%, to $4.99 billion. EBITDA margin improved by seven-tenths of a percentage point, to 38.2%, helped by an additional $160 million in cost synergies related to its merger with SABMiller.

Anheuser-Busch InBev reiterated its goal of achieving a total of $3.2 billion in merger-related cost savings, up from the $2.3 billion it has captured to date. Management says the remaining $900 million in cost synergies will likely be attained in the next two to three years.

AB InBev also said it expects to generate "strong revenue and EBITDA growth" in fiscal 2018, with growth accelerating in the second half of the year. "Our growth model is now far more focused on category development, and as a consequence, we expect to deliver revenue per hl growth ahead of inflation based on premiumization and revenue management initiatives, while keeping costs below inflation," the company said in a press release.

In addition, Anheuser-Busch InBev remains committed to passing profits on to shareholders via dividends, though paying down debt remains a priority. "We continue to expect dividends to be a growing flow over time, although growth in the short term is expected to be modest given the importance of deleveraging," the company said.