The Supreme Court gave the casino industry a big win this week.

Casinos and gaming suppliers are tripping over themselves to show how excited they are about the Supreme Court overturning a law that banned sports betting in every state in the U.S. except Nevada. Caesars Entertainment (CZR), MGM Resorts (MGM -1.33%), and Scientific Games (LNW -1.65%) all released statements in support of the potential of expanded sports betting with Scientific Games saying it could be the "greatest wave of gaming expansion in the United States in the past 20 years." 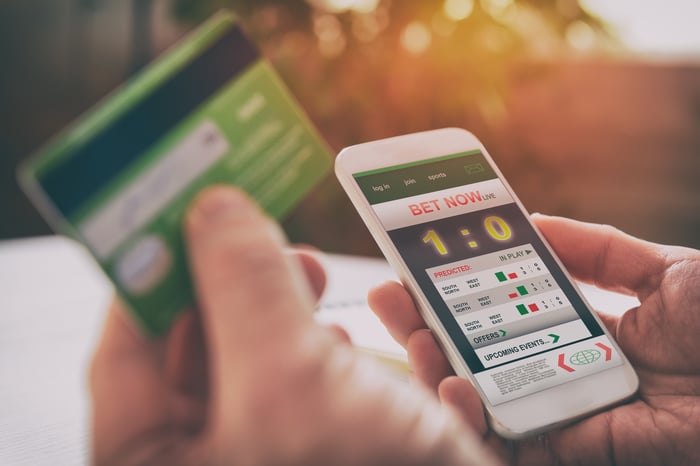 Legalizing sports betting will bring an industry worth tens of billions of dollars per year out of the shadows of illegal betting, but it's unclear just how big sportsbooks will be to casinos. The American Gaming Association estimates $150 billion is bet on sports per year, but that's likely on the high side of the opportunity. Jay Zagorsky recently wrote that the sports betting industry would be about $67 billion if it matches the level of play that the U.K. does per person.

Nevada saw about $4.8 billion bet at sportsbooks in 2017, so a range of $67 billion to $150 billion is probably correct for legal sports betting across the U.S. But keep in mind that each state will have to pass its own laws to govern sports betting.

If sports betting is legalized in a large number of states, it isn't as if there will be a sportsbook on every corner. In Nevada, players have to deposit money at a casino sportsbook before they can bet on games. But from there they can bet anywhere in the state. If that becomes a model for the rest of the country, all gaming companies will need is the ability to intake betting dollars and have an app for users to place bets through. Companies like Caesars, which has gaming licenses in 13 states, or Penn National Gaming (PENN -3.52%), which has 20 jurisdictions, have the broad footprint to build out their sportsbook infrastructure quickly.

One of the reason suppliers like IGT (IGT -0.11%) and Scientific Games are reacting positively is because they'll likely provide the betting infrastructure casinos use. IGT powers MGM's playMGM app that takes sports bets in Nevada today. It could easily scale that technology nationwide. Scientific Games sees its OpenBet product suite providing similar solutions to its customers.

It's not yet clear whether online sports betting in the absence of a physical location will be broadly legalized. For example, The Stars Group, which owns PokerStars, PokerStars Casino, Full Tilt, and other online betting brands is hoping to get in on the sportsbook action in the U.S. The company already has millions of customers on its platforms and great brand awareness. But a lack of physical locations could limit its entrance into U.S. sports betting, so the rules of the game state by state will be important for investors to watch.

Not all sports leagues are as excited as casinos

Some sports leagues are pushing back against legalized sports betting. The NCAA is against betting and the NFL has called for Congress to enact a framework for betting, rather than leave it entirely up to the states. The NBA also supported a regulatory framework on a federal level.

The NBA, MLB, and even PGA Tour are also trying to capitalize on the opportunity with what they're calling an "integrity fee," hoping to take a cut of any money gambled on their league. That hasn't been received well by casinos, but the leagues are trying to get in on the action if they can.

Bringing sports betting out of the shadows is going to get a lot of attention from gaming companies, and those allowed to take take a part of the action could see billions of dollars in new revenue.