Please ensure Javascript is enabled for purposes of website accessibility
Log In Help Join The Motley Fool
Free Article Join Over 1 Million Premium Members And Get More In-Depth Stock Guidance and Research
By Travis Hoium – Updated May 16, 2018 at 1:09PM

Solar companies have the chance to differentiate their offerings by adding compelling power-storage systems. But Vivint Solar is having problems finding the right battery partner.

Vivint Solar (VSLR) has spent the past year cleaning up its house in residential solar after the company's sale to SunEdison fell through. Now, operations are steadily improving. Vivint has also been one of the beneficiaries of Tesla's (TSLA -8.34%) decision to shrink its solar business, and it has made a relatively quick transition to selling solar systems rather than financing them and then leasing to customers. That's the good news.

What hasn't been going so well for the company is its launch of energy-storage products. A partnership with Mercedes-Benz recently went up in smoke after the automaker decided to focus its efforts on large-scale installations, and its effort to go head to head against Tesla's Powerwall apparently hasn't been as successful as the company had expected. This leaves Vivint Solar without its key energy storage partner, and with no obvious path to becoming a leader in the rapidly growing energy-storage market. 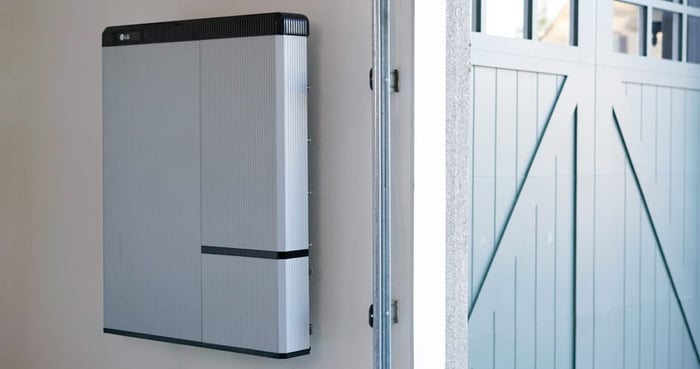 In May 2017, Vivint Solar and Mercedes-Benz forged an alliance to bring energy storage to the residential solar market. Mercedes-Benz' supplied the battery units; each one had a 2.5 kW-hr capacity, and up to eight could be strung together in a storage system, enough to power the average U.S. home for about 16 hours.

Now, the two companies are going their separate ways. Vivint Solar has already replaced Mercedes-Benz' batteries with LG Chem batteries on its website, but Greentech Media is reporting that LG batteries are only available in Utah, and won't be rolled out to larger markets like California until later this year.

It's likely that more than one fatal flaw contributed to the partnership's collapse. The requirements an automaker has for an electric vehicle battery don't entirely translate to what's needed for one being installed in the home, so there could have been some issues with fit. Also, its batteries individually had far less capacity than Tesla's 14 kW-hr Powerwall 2. Finally, Vivint Solar was relatively opaque on pricing, but Electrek has reported that the cost of a Mercedes-Benz energy storage system was between $5,000 and $13,000, which may not have been a compelling deal compared to the Powerwall, priced at $5,900 plus installation.

Replacing Mercedes-Benz batteries with LG Chem should help lower costs and bring a company more focused on what the home market needs in energy storage, so there are some positives to bringing LG Chem onboard and it's probably the right move short-term. But it doesn't help at all with differentiating Vivint Solar's product in the marketplace. LG Chem is also partnering with the biggest residential solar installer in the U.S., Sunrun (RUN 3.84%), meaning Vivint Solar is only catching up to, not surpassing, the competition.

The next big growth market in residential energy

How Vivint Solar fares in the energy storage business could be key to its future prospects. Despite being small potatoes today, solar plus storage installations are expected to grow into a huge market within the next five years, and solar installers will be the primary sales point for those systems. According to GTM Research, just 16.7 megawatts (MW) of residential energy storage was installed in 2017 -- that figure is forecast to explode to around 1,000 MW in 2023. In dollar figures, the residential energy storage market is expected to surpass $1 billion by 2022.

Solar installers are the best-positioned players to sell and install home energy storage. If Vivint Solar doesn't get its strategy right, it could be left in the dust.

What I worry about from an investment perspective is that Vivint Solar is commoditizing itself. It already installs commodity solar panels and inverters; loan financing is a commodity being done by third parties; and now, energy storage systems (at least the ones it's offering) look like a commodity as well. It's hard to build a sustainably profitable business when your products are exactly the same as those of many of your rivals. But that's the situation Vivint Solar finds itself in today.