The financial problems for these three solar companies continue in 2016.

What: The SunEdison (SUNEQ) family of companies, including yieldco TerraForm Power (TERP) and soon-to-be-acquired residential solar company Vivint Solar (VSLR), had a rough January -- falling 38.5%, 21.4%, and 13.2%, respectively. In a year when solar installations should explode, these three are moving in the wrong direction. 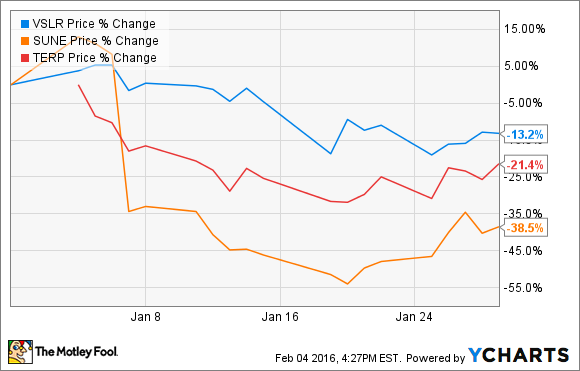 So what: Energy stocks had a rough month in general, which can be blamed for a small part of the problems in the solar industry. But SunEdison's financial difficulties are driving the decline in all three stocks.

Vivint Solar is expected to be acquired in the next few months for a combination of cash and stock. But SunEdison doesn't have enough cash on hand to pay for the company, so it was planning to use TerraForm Power to finance the acquisition by buying Vivint Solar's operating assets for $799 million. The problem is that TerraForm shareholders, including billionaire David Tepper of Appaloosa Management, think buying residential solar assets is a bad idea, and they would rather the company focus on utility-scale projects with more reliable counterparties. Not to mention that TerraForm's current 14% dividend yield means it doesn't have the ability to sell shares to acquire assets in an accretive manner.

So, SunEdison is seeking alternatives to close the acquisition, including potentially selling assets it has on the balance sheet or selling Vivint Solar assets to a third party. Both moves would likely result in transactions at fire-sale prices considering the decline in yieldcos over the past six months, meaning SunEdison might be trading good assets for bad.

If TerraForm can't throw in $799 million for the acquisition as planned, SunEdison may be out of room to offer debt as well. An exchange of debt for a combination of shares and new debt came with an interest rate of LIBOR + 10% with an 11% interest-rate floor. That's an absolutely insane price given that the cash-on-cash yields SunEdison has been paying for assets are around 9%.

Adding another twist, Greenlight Capital, which is a major shareholder, was offered a board seat, and the company agreed not to sell new shares that dilute current shareholders without a supermajority vote from the board of directors. So, selling shares to finance some of these moves is probably out of the question.

Now what: There aren't a lot of options for SunEdison at this point, and while the Vivint Solar acquisition will probably be completed, it could come at a steep price. SunEdison will likely have to sell assets, and if Tepper is successful in getting TerraForm Power to act more independently, he could reduce the value the yieldco has for SunEdison.

I would stay far, far away from these stocks as billionaires fight over their future. There's simply too much risk to be involved in SunEdison or any of its related companies right now.

Last Week in Solar
Will 2016 Be Cloudy for These 2 Solar Companies?