There aren't very many things that can be bought for less than $5 anymore. Even a fast-food meal will usually set you back more than that. But there are a few stocks with share prices below $5 that are actually worth a look.

Novavax (NASDAQ:NVAX), PDL Biopharma (NASDAQ:PDLI), and Senseonics Holdings (NYSEMKT:SENS) all currently trade for less than $5 per share. Each of these stocks has the potential to generate solid returns over the long run. Here's what you need to know about these three healthcare companies. 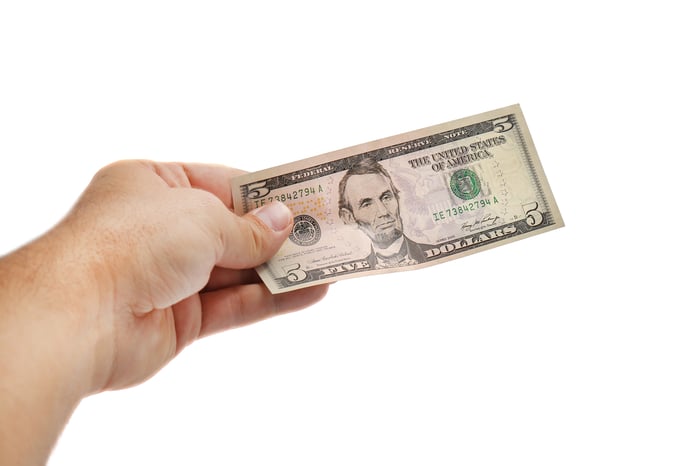 Novavax's share price was below $1 just 12 months ago. Since then, though, the biotech stock has soared 68%. And the gains were even higher, but Novavax conducted a stock offering in April to raise additional cash. This caused its share price to pull back from the high levels reached earlier this year.

There are two reasons behind investors' excitement over Novavax. One is the company's lead pipeline candidate, a vaccine for the respiratory syncytial virus (RSV). Novavax is evaluating the vaccine in a phase 3 clinical study for maternal immunization of infants. Interim results from this study are expected in the first quarter of 2019. If all goes well, the company could submit the RSV vaccine for regulatory approval in the U.S. and in Europe by early 2020.

The second reason for Novavax's great stock performance is its nanoparticle-based influenza vaccine NanoFlu. Novavax announced highly encouraging results from a phase 1 study of the vaccine on Feb. 28, 2018. The company expects to advance NanoFlu to phase 2 testing in the third quarter of this year.

Novavax's opportunities are big if the company achieves success with either of these vaccines. RSV is the most common cause of lower respiratory tract infections in infants and young children worldwide and is the top cause of hospitalization of infants. But there's no approved vaccine at this point. The annual market for flu vaccines in the U.S., Japan, and leading European countries is projected to reach $5.3 billion by 2025 -- a 65% jump over a 10-year period.

PDL Biopharma stock is up 18% over the last 12 months, a performance that beats the S&P 500 index of large-cap stocks. Like Novavax, though, PDL was up a lot more at one point. An attempt to buy Neos Therapeutics that was later abandoned contributed primarily to the stock pullback.

It wasn't long ago that PDL Biopharma claimed one of the biggest healthcare dividend yields on the market, with the company receiving royalties from blockbuster drugs including Avastin and Herceptin. However, the company's patents expired, its royalties dwindled, and PDL was forced to eliminate its dividend and try to reinvent itself.

PDL Biopharma claims one distinction that few companies can: Its cash stockpile is roughly the same as its market cap. The company reported cash, cash equivalents, and marketable securities totaling $405 million at the end of the first quarter. At the time of this writing, PDL's market cap is $407 million.

Senseonics Holdings is the best performer of the three, with its stock price skyrocketing more than 130% over the last 12 months. The big news for Senseonics came in March when an FDA advisory committee unanimously recommended approval for the company's Eversense implantable continuous glucose monitoring (CGM) system.

The potential for Eversense has made Senseonics quite popular on Wall Street. Analysts have picked it as one of the fastest-growing diabetes stocks of 2018 -- and, so far, they've been right on the money.

Eversense includes a small sensor inserted completely under the skin. This sensor communicates with a smart transmitter worn over it. Blood glucose levels are automatically sent every five minutes to a mobile app on the user's smartphone. Eversense's implantable sensors last up to 90 days, with the Eversense XL system allowing sensors to last for up to 180 days, which makes using the system much more convenient for diabetic patients.

Senseonics expects to launch Eversense in the U.S. later this year. The company also hopes to introduce the Eversense XL system in Europe in 2018 and begin a pivotal clinical trial of the system in the U.S.

Now that you've heard the reasons to like these top stocks under $5, it's only fair that you know the rest of the story. All of these stocks could be volatile and risky.

Novavax isn't assured of success for either of its two promising vaccines. PDL Biopharma might not be able to find attractive investment opportunities. Even if Eversense wins a green light from regulators, Senseonics will compete in a crowded market against rivals with deep pockets. There's also the potential for dilution, especially with Novavax and Senseonics.

These risks explain why the three stocks trade below $5 per share. Novavax, PDL Biopharma, and Senseonics could be big winners over the long run. However, there's a real possibility that they won't be. I think the stocks are worth considering for investors who aren't afraid of risk -- but they're not for the faint-hearted.