Please ensure Javascript is enabled for purposes of website accessibility
Log In Help Join The Motley Fool
Free Article Join Over 1 Million Premium Members And Get More In-Depth Stock Guidance and Research
By Brian Stoffel – May 17, 2018 at 8:49AM

While one is the reigning king of shoes, the other is gaining ground fast.

With that success, however, comes the law of large numbers. Sporting a market capitalization of $110 billion, it's tough to assume that Nike can reasonably grow anywhere near as fast as it once did. Does that mean that smaller upstarts -- like today's challenger, Skechers (SKX -6.98%) -- are better buys? 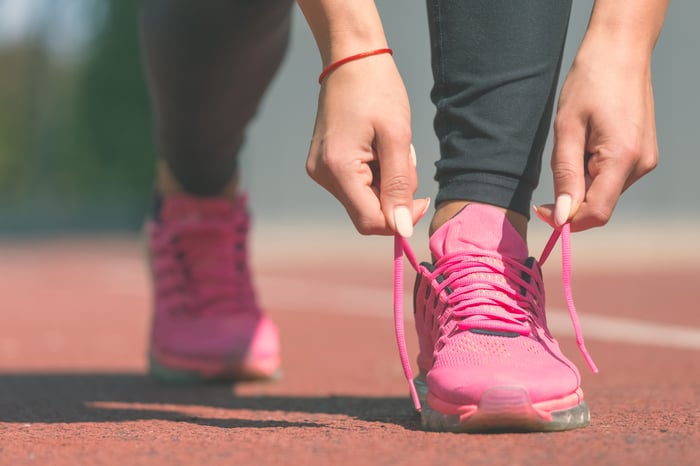 It's impossible to answer that question with 100% certainty. But by viewing the matchup through three different lenses, we can get a better idea of what we're getting if we pay for shares today.

We'll start with the hardest -- and most important -- variable to analyze: a company's sustainable competitive advantage. This is often referred to as its "moat", and we have an entire page devoted to examining moats here.

Because just about anyone can make shoes and other athletic apparel, the only real moat companies like Nike and Skechers have comes from their brand value. In that respect, Nike is the clear winner. According to Forbes, Nike's brand is the 16th most valuable in the world -- and first among apparel companies -- worth almost $30 billion.

That brand value has been extremely important on the international front, where the bulk of Nike's growth is currently coming from. Sales were up significantly in Europe, the Middle East, and Africa (19% growth), China (24%), and Asia Pacific and Latin America (13%). North American sales, on the other hand, have been lagging; but the company's most recent quarter suggests that those concerns could be disappearing soon.

While Skechers' recent earnings forecast has investors worried, those are short-term concerns. Management's tempered forecast for the coming quarters has more to do with the timing of order shipments than slacking demand, but that didn't stop investors from bidding the stock down significantly last month.

The company has been making significant strides in terms of its brand value, and has clearly found a winning formula with consumers. In fact, in 2016 Brand Finance rated Skechers as one of the fastest growing brands in the apparel industry, gaining 93% in value in just one year, and totaling $2.6 billion at the time.

That said, at the end of the day, this is really about the overall value of each company's brand, and Nike's is a clear winner.

Next, we want to get an idea for how well these companies would do if there were an economic downturn today. Obviously, people are going to be needing shoes and -- probably -- athletic apparel no matter the economic climate. That said, most people will tighten their purse strings and delay those purchases if they feel like times are really tight.

How well could Nike and Skechers withstand such a period? And is either of them in better shape to weather the storm? Companies can be broken down into three groups when evaluating this metric, all loosely based on the writings of trader and best-selling author Nassim Taleb: fragile, robust, and antifragile. You can read more about what each mean here.

Keeping in mind that Nike is valued at over 20 times the size of Skechers, here's how they stack up.

Both of these companies fall solidly outside of the "Fragile" camp. Even though Nike's debt load is significantly greater -- relative to its cash position -- as Skechers, the company should have no problem making payments on that debt. This past year, Nike did have to make one large $1.2 billion payment on its debt. But between 2014 and last year, the most it has had to devote to paying off the current portion of long-term debt was $330 million. That's a figure that's easily covered by the company's free cash flow.

But Skechers is clearly in a superior position should a crisis hit. Not only is its debt load much smaller -- relative to cash on hand -- but it also has a commensurate level of free cash flow for its size. Perhaps most importantly, if a downturn were to hit today, Skechers would have the freedom to buy back its shares at cheaper prices or even acquire popular start-ups that might be trading for significantly depressed prices.

Because of its current debt load, devotion to paying a dividend (more on that below), and the fact that the company is so large that small acquisitions would barely move the revenue needle, those same opportunities wouldn't be present for Nike.

Finally, we will try and figure out if how expensive Nike and Skecher's stocks are, relative to one another. There's no litmus test that can readily tell us how they compare, but we can consult a number of variables to get a better idea for what we're paying for if/when we buy shares.

On this facet, these two are more evenly matched. In the previous section, Nike's devotion to paying its dividend was a mark against the company. Here, it's an advantage; while the 1.2% yield today isn't much to write home about, the payout is very sustainable, as it only eats up half of the company's free cash flow. That means there's lots of room for growth in the future.

But Skechers trades for cheaper or commensurate ratios across the board. In the end, the tiebreaker is the PEG ratio, which tells us how expensive a stock is relative to its growth. On that measure, Skechers is trading for a 75% discount. A huge part of this is due to the fact that the stock suffered the aforementioned sell-off in April while the long-term growth outlook for the company remains largely unchanged. Because of that, I'm giving the nod here to Skechers.

So there you have it: While Nike has a stronger moat around it, it's impossible to ignore the strong balance sheet and cheap(er) price that Skechers is trading for right now. That said, I'm never particularly optimistic with companies that rely on brand value alone for their moat, which is why I own neither of these companies -- nor am I willing to make an "outperform" call on them in my CAPS profile.

If you must choose between these two, I would go with Skechers. But I think there are better places to invest your hard-earned cash today.