Please ensure Javascript is enabled for purposes of website accessibility
Log In Help Join The Motley Fool
Free Article Join Over 1 Million Premium Members And Get More In-Depth Stock Guidance and Research
By Brian Stoffel - May 6, 2018 at 9:33AM

Under Armour is showing signs of life, but does that mean it's a buy?

For the longest time, Under Armour (UA -3.20%) (UAA -4.04%) could do no wrong. It produced quarter after quarter of 20%-plus sales growth and seemed like it would eventually overtake the athletic apparel world.

Then a series of decisions derailed the company: It began offering its wares at discount stores and investing heavily in wearable technology with little to show for it, and shares plunged. The whole time, Adidas (ADDYY 0.08%) churned along, offering up new retro brands while seeing its stock more than triple since September 2015. 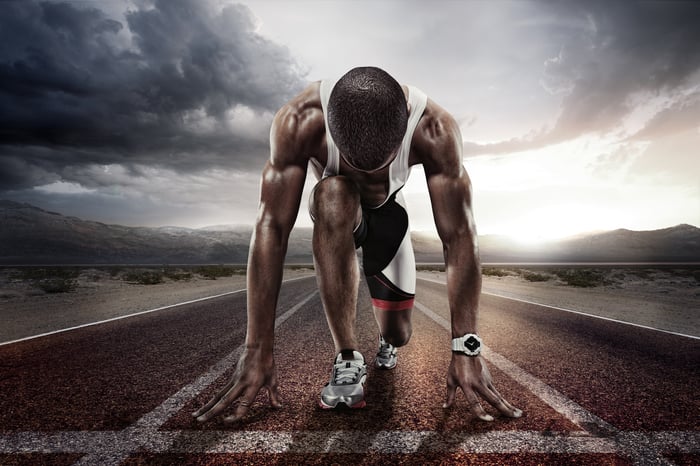 But recently the tables seem to have turned. Under Armour released an earnings report that, while not outstanding, offered hope for the future. Does that mean that its stock -- down over 60% from its all-time highs -- is the better buy today? While we can't answer that with 100% certainty, let's look at the question through three different lenses.

For long-term, buy-to-hold investors, there's nothing more important to evaluate than a company's sustainable competitive advantage, often referred to as its moat. In the most basic sense, a moat is what separates one company from another, and keeps customers coming back for more, year after year, while holding the competition at bay for decades.

In the world of athletic apparel moats are famously narrow, and provided almost solely via brand value. For a long time, Under Armour benefited from a very strong brand. But that brand has been tarnished by management's choice to offer clothes at discount retailers, thus shedding the premium association many had with the company.

Adidas, on the other hand, has recently proven adept at building strong brands. The company's line of shoes and direct-to-consumer focus are landing it far ahead of Under Armour in North America. Forbes estimates that the Adidas brand is the second-most valuable brand in the world, worth about $8 billion. Under Armour didn't make the list.

Next we have financial fortitude. Here we want to asses how a company would fare if an economic crisis hit right now. There are three basic designations, all derived from former trader and best-selling author Nassim Taleb's writings:

With that in mind, and remembering that Adidas is valued at almost seven times the value of Under Armour, here's how they stack up.

This is a very clear and easy decision: Under Armour has an enormous -- if improving -- debt load. That makes the company very vulnerable to short-term problems. Adidas, on the other hand, has very healthy cash flows and a manageable balance sheet.

I would call Under Armour "fragile", while Adidas is somewhere between "robust" and "antifragile".

Finally, we have the murky science of valuation. While there's no single metric that can offer a complete picture for how "expensive" or "cheap" a stock is, we can consult multiple data points to assemble a fuller picture.

Here again we have a clear winner. Adidas is not only cheaper on every metric, but it also offers shareholders a modest -- but very sustainable -- dividend.

So there you have it: Adidas wins in a clean sweep. The company's brand is currently stronger than Under Armour's, it has a stronger balance sheet, and it's more favorably priced.

However, I wouldn't want to own either stock -- which is why I'm not giving Adidas an out-perform rating on my CAPS profile. While the company has definitely done a great job executing lately, the moat provided by brand strength isn't super-wide, and can be very fickle. Trading at over 35 times earnings and free cash flow, it's just too expensive for me.