Citing some modest growth prospects and a few hoped-for changes to Mobile TeleSystems' (MTS) business model, VTB announced today that it's upgrading MTS stock from hold to buy and assigning it a $12.50 price target. With MTS shares currently selling for just $10 and change, that new price target promises about a 22% profit -- plus a better-than-10% dividend yield -- to new investors today.

Can investors expect that promise to be fulfilled? Here's what you need to know. 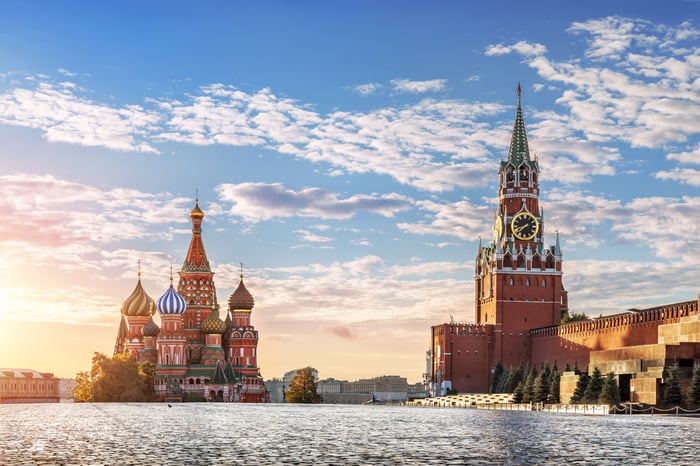 It's a beautiful time to invest in Russia, says this analyst. Image source: Getty Images.

VTB chose the timing of its upgrade carefully. In less than a week -- on May 23 -- Mobile TeleSystems is expected to report its fiscal Q1 2018 earnings, and despite the ongoing effects of Western sanctions against Russia, VTB says it thinks MTS' results should be just as "solid" as the company's Q4 2017 report was.

Specifically, VTB projects that MTS will report 3.4% growth in mobile service revenue for Q1, and 7% growth in earnings before interest, taxes, depreciation, and amortization (EBITDA) in the company's key Russian market. When you consider that Russian mobile services provide 84% of MTS' revenue, and 98% of its operating profit (according to data from S&P Global Market Intelligence), VTB's projections can basically be taken as a proxy for the performance of the whole MTS business.

However, analysts surveyed on Yahoo! Finance are looking for only about 1% growth in MTS' revenue for Q1, and zero growth in earnings ($0.22 per American depositary receipt, the same as last year). Thus, if MTS reports sales growth three times as great as what Wall Street is looking for, and even stronger growth in earnings, this should come as a positive surprise to investors next week.

Further down the line, VTB is looking for three things to affect the health of Mobile TeleSystems' business, as StreetInsider.com (subscription required) explains in a write-up on the analyst's recommendation this morning: "i) the elimination of interregional roaming; ii) the clean-up of third party content revenues; and iii) cost inflation (salaries, spectrum fees)."

Sadly, StreetInsider doesn't go into a lot of detail about how exactly VTB expects these factors to play out. But logically, eliminating roaming fees would encourage greater usage of MTS' services, spurring revenue growth but potentially at the cost of profits from roaming fees (i.e., service revenue would rise, but profits could fall unless revenue rises enough to offset the loss of roaming fees).

Cleaning up third-party content revenue, in contrast, is something investors can expect to both simplify the business and make it easier for customers to patronize MTS instead of rivals like Megafon and Beeline, and thus spur growth and profits as a result.

Conversely, cost inflation through higher salaries, more expensive fees for access to spectrum, or both, would be a clear negative for MTS' profits. How exactly these three factors play out, says VTB, should become clearer "later this year."

But what about the sanctions?

The one thing investors may worry about when considering an investment in Russia -- but the one thing that VTB does not think will be an issue -- is the effect sanctions, imposed against Russia for its depredations in Ukraine and its interference in Western elections, will have on MTS' business.

To the contrary, VTB argues that "recent rouble weakness" resulting from sanctions' effect on the Russian economy could actually help MTS, because "there is no downside to the capex outlook." Capital equipment purchased locally in rubles would logically cost MTS less money in dollar terms when the ruble is cheap than it would if the ruble were valued more strongly relative to the dollar. Additionally, VTB notes that "net balance sheet exposure to FX is near zero" for MTS.

And generally speaking, with only $4.9 billion in debt and $1.3 billion in cash on its balance sheet, MTS looks remarkably unleveraged on a $9.6 billion market capitalization -- especially when compared to the debt-heavy balance sheets of Western analogs such as AT&T, Comcast, or Verizon.

At a valuation of only 13.6 times earnings and just 8.2 times free cash flow, Mobile TeleSystems shares look pretty darn cheap for a dividend stock yielding 10.7% and pegged for any growth whatsoever. Yet most analysts actually agree that MTS' growth prospects are strong (14% annual earnings growth projected over the next five years).

Between the dividend yield and the growth projections, I don't think an investor has to work very hard at all to see why this stock is a buy.