The deal joins Marriott Vacation's respected labels (which include its namesake, as well as the Ritz-Carlton vacation and St. Regis vacation brands) with ILG's Vistana Signature Experiences and Hyatt Vacation Ownership brands. Other advantages include annual expected cost synergies of $75 million, which are expected to be realized in just two years.

Perhaps investors are keen to take a little money off the table. As I discussed back in February, the company's shares have been on a tear over the last several quarters, and asking if they're overvalued is a legitimate question in 2018.

It's also possible that a prominent aspect of this deal has caused some advocates to fret. That is, the combined entity will operate under a significant debt load once the merger completes later this year. 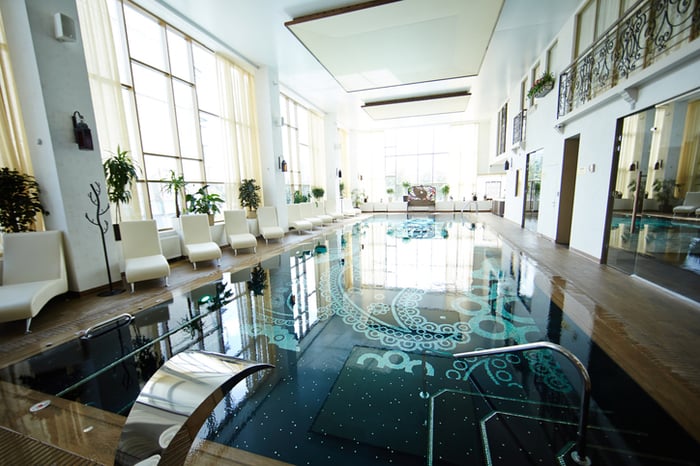 More debt than meets the eye

If you're willing to take a very broad view of balance sheet leverage, you're probably fine with Marriott Vacations' ballpark, pro-forma estimate of debt-to-EBITDA of roughly 3 times. This means after the two companies complete their merger, their combined borrowings will equal three times annual earnings before interest, taxes, depreciation, and amortization. Pro-forma EBITDA is projected at $737 million annually.

Still, there are several caveats to consider. First, the calculation excludes non-recourse debt on both company's books. Non-recourse debt, used extensively in the real-estate industry, gives the borrower the ability to walk away from an obligation -- in exchange for leaving behind the collateral. In this case, collateral would typically be represented by some of the combined company's properties.

It's fine for Marriott Vacations to exclude non-recourse debt from their calculation, since ultimately, the company doesn't have to honor those specific obligations if it so chooses. But this would be highly unusual, and to this point, credit ratings service Moody's asserts that Marriott Vacations has already indicated it will honor the non-recourse debt ILG has on its books.

Second, Marriott Vacations' debt to EBITDA is presented on a "net debt" basis -- in other words, outstanding debt has been reduced by available cash on hand. Again, there's no problem in presenting debt this way, but to get an apples-to-apples benchmark, we would first want to look at debt on a gross, not a net, basis.

By my calculations, if we include non-recourse debt and view all borrowings on a gross basis, the new entity will carry debt of $2.1 billion. Add in an estimate of financing that Marriott will need to close the deal, roughly $2.0 billion, and total debt to EBITDA is closer to 5.5 times. That's a considerably steeper reading, more fairly described as high leverage than moderate leverage.

Of course, the merged company will enjoy fairly strong cash flow, and management has already stated that debt reduction will be a priority going forward. But a more realistic view of the projected balance sheet illuminates the need for a bit of caution around these shares.

So, if you like the concept of these two formidable companies joining forces, but are concerned about Marriott Vacations' still relatively rich valuation, it may be prudent to wait a few quarters until the transaction completes.

At that point, the financing to complete the deal can be analyzed to understand the effect of new debt service and higher interest expense on cash flow and future earnings. In sum, a union of Marriott's and ILG's assets should present a rewarding investment opportunity. But there's nothing wrong with exercising patience in order to buy in at a fair price.